After 6 weeks of steady gains, the is finally showing signs of exhaustion but there could be one last push before a full-fledged top ahead of this month’s .

The greenback saw losses against most of the major currencies but in each one, it gave up less than 1% of its gains. To put this move into context, the rallied 7.25% over the past 6 weeks. The , on the other hand, remained trapped in a tight range ahead of the Reserve Bank’s . Interestingly enough the experienced the strongest gains for no reason other than a short squeeze as NZD data was mixed. U.S. , the biggest event of the week, had very little impact on the market. Instead, forex traders were charged by the political developments in Europe and U.S. President Trump’s brewing trade war.

Although the U.S. dollar pulled back, nonfarm payrolls the most important piece of data released last week changes nothing for the Federal Reserve. Job growth exceeded expectations in May, the unemployment rate declined and wages grew by 0.3%. For now, the US dollar is taking President Trump’s attack on global trade in stride but how long that last remains to be seen as retaliation from other nations could hurt the dollar. Looking ahead, the lack of major US economic reports means the focus will be on trade and the lead-up to the June 13 monetary policy meeting. Decent job growth and hawkish comments from US policymakers reinforce the widely held view that the Chairman will raise interest rates next week. Unless something challenges that outlook, investors will be holding onto their dollars into the FOMC meeting.

Economists are looking for this week’s non-manufacturing ISM report to show stronger performance in the service sector. The market is pricing in a 100% chance of tightening so there’s little doubt that the move will happen. How quickly the Fed follows with another hike is the real question and we won’t know the answer until they meet in 8 trading days. Fed officials favor gradual rate increases and according to Fed fund futures, investors see a 75% chance of another hike in September or November with the odds rising to 87% in December. Technically, is still the best pro-dollar trade as the greenback’s rally is tiring against other currencies.

Better than expected UK PMI numbers confirmed the bottom in that was days in the making. At the start of last week, the outlook for GBP/USD was grim as a quiet U.K. calendar provided sterling with the perfect catalyst for a move to new lows. Risk aversion drove GBP/USD to its weakest level in 6 months last Tuesday, the same day that the tumbled more than 500 points intraday. Sterling took its cue almost exclusively from the market’s appetite for risk along with its demand for US dollars and euros. But the uptick in the PMI report toward the end of last week helped GBP/USD stabilize and further gains are possible in the days ahead if the other PMI reports are strong. Construction and service sector PMI reports are due for release along with the central bank’s survey of inflation expectations for the next 12 months. This week’s price action suggests that GBP/USD is trying to stabilize but a move above 1.3450 would be needed for the month-long downtrend to ease.

It was a challenging week for the euro as the political drama in Europe and the expiration of the European Union’s exemption to the US’ aluminum and steel tariffs deterred investors from buying. These concerns took EUR/USD to its weakest level in 10 months. However as political uncertainty turned into reality, investors came to terms with the escalation of trade tensions in Europe (President Trump also threatened to ban the sale of German autos). Italy managed to form a populist coalition government, ending months of uncertainty for the region’s 4th largest economy. In Spain, the Eurozone’s 3rd largest economy, Prime Minister Rajoy lost a no confidence vote and will be replaced by opposition leader Pedro Sanchez. Investors took the news in stride as most parties in Spain support rather than contest EU membership. The lack of meaningful data from the Eurozone this week leaves a global trade war the main concern as we have begun to see an upturn in Eurozone data. German retail sales rose 2.3% in the month of April, versus a forecast for only 0.5% growth. Germany’s unemployment rate also declined while consumer prices moved higher. This strength was mirrored in the Eurozone especially through consumer price inflation, which grew by 1.9% yoy in May, up from 1.2% in April. These reports along with the nearly 9 cent drop in EUR/USD means the ECB should be less pessimistic at their June 14th policy meeting (a day after the Fed).

This is a big week for the Australian dollar. There will be a Reserve Bank monetary policy announcement on Tuesday, along with the release of retail sales, first quarter GDP, service sector PMI, Australian and Chinese trade balances. When the RBA last met, their comments drove the Australian dollar lower because their confidence in growth was offset by concerns about declining terms of trade and low inflation. We’ve seen some improvements since then including stronger full time job growth, business confidence and consumer inflation expectations, but they won’t be enough to convince the central bank that the risks that are fading. So even if there is a tinge of optimism, it is important to realize that the RBA remains firmly neutral with no plans to raise rates this year. With that in mind, the Australian dollar lost significant value this year so if the RBA is encouraged by recent data and if enough of this week’s retail sales, Q1 GDP, trade balance and service sector PMI reports surprise to the upside, we could see trade back up to 77 cents. 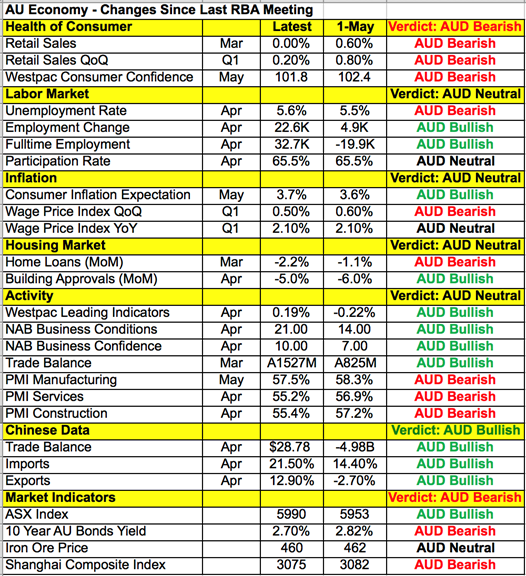 Meanwhile, after rising for 6 days straight, fell sharply on the back of the Bank of Canada’s monetary policy announcement but the loonie gave up all of its gains when President Trump killed the NAFTA deal. According to Prime Minister Trudeau, the talks were going well up until Vice President Pence demanded a sunset clause that would require NAFTA to be renegotiated in 5 years unless both parties agreed to renew. What appeared to be a done deal is now very much up in the air and until there’s a positive resolution, the Canadian dollar will have a tough time rallying. Once progress is made however, the Canadian dollar will soar because the Bank of Canada, who was unambiguously dovish in April made a U-turn in May by dropping the reference to being “cautious on rates” and removing the language that pertains to the need for “monetary policy accommodation” from their monetary policy statement. Instead, policymakers felt that inflation is “likely to be a bit higher in the near term,” and activity “a little stronger than projected.” They also expect “solid wage growth” to contribute “positively to housing and consumer demand.” This is a nod to the acceleration in manufacturing activity, recovery in retail sales and uptick in oil prices. However given that data wasn’t uniformly positive last month (GDP growth slowed, core retail sales declined and CPI growth eased), the shift in tone caught the market by surprise as July rate hike expectations jumped from 53.2% to 77% between Tuesday and Wednesday. Looking ahead, we expect the Bank of Canada’s optimism to translate into stronger data with the trade balance, IVEY PMI and employment reports scheduled for release. As long as USD/CAD remains below 1.2950, a move down to 1.2700 becomes likely.

Incidentally, the New Zealand dollar was one of last week’s best-performing currencies. No major economic reports were released but the terms of trade fell in the first quarter, business confidence declined and consumer confidence saw only a small improvement. After consolidating in a tight .6850 to .6975 range since mid-May, finally broke to the upside on the back of profit taking of long US dollar positions. The pair broke above 70 cents to trade as high as .7025. New Zealand’s economic calendar is light in the week ahead but the Treasury will be releasing their monthly economic indicators, which could elicit a mild reaction in NZD/USD. New Zealand’s currency will most likely take its cue from the market’s appetite for Australian dollars so keep an eye on .

Editor’s Note: Kathy Lien remains on partial maternity leave and will resume her daily posts in August. In the meantime, stay tuned for her once-weekly market updates.