HomenewsMarket Overview10 Reasons Why December Will Be Rocky For FX

10 Reasons Why December Will Be Rocky For FX

November was a volatile month for US equities but this volatility did not translate into big moves for currencies. Unlike the , which had a 3,200-point swing, trading ranges for pairs like the and were confined to 300 pips and the moves were not one way.

Trading ranges narrowed even further over the past week as investors shrugged off unexpected comments from President Trump on trade and Fed Chair Powell’s views on interest rates. In many ways market participants have become desensitized to the musings of government officials. Actions speak louder than words and rather than believe what the administration is offering – threatening or speculating that the Fed could pause after hiking in December – traders prefer to wait and see how these meetings play out before taking any big positions. With that in mind, the US dollar extended its gains last week against all of the major currencies except for the Australian and New Zealand dollars. AUD and NZD benefitted from the hope that the next round of sanctions on China will be delayed.

December is packed with market moving events ranging from the G20 to the UK Parliament’s Brexit vote, FOMC and OPEC. There’s a lot at stake in each of these meetings which could make for a rocky time for currencies. Of all the events on this month’s calendar, here are the 10 most important. This list does not even include this week’s Reserve Bank of Australia and Bank of Canada monetary policy meetings, nonfarm payrolls and Canada’s employment reports.

What If Trump Delays Chinese Tariffs?

This week in particular, the biggest determinants of how the dollar will move will be the meeting between US President Trump and Chinese President Xi, Fed Chair Powell’s testimony to Congress and the non-farm payrolls report. By the time you read this note, we will know whether President Trump has agreed to delay the next round of tariffs until further talks are held or proceed with them. It’s doubtful that US and China could come to some far-reaching agreement in Buenos Aires and ahead of the summit officials already tried to temper expectations that a deal would be coming noting instead that two parties are likely to extend their discussions into spring with US delaying any further tariffs for now. On the face of it that would seem like good news for the dollar, but in actuality, it is simply the absence of an additional negative and it remains to be seen how much help the buck would get from any such statement out of G-20. USD/JPY and are the most sensitive to the talks, but a more collaborative tone would be positive for all risk currencies. Further antagonism on the other hand would send USD/JPY and other major currencies lower.

Meanwhile the biggest surprise last week came from Fed Chair Powell. The greenback fell quickly and aggressively after the US central bank head said interest rates are “just below” neutral levels because just a month ago, he said they are a “long way from neutral at this point.” Considering that there’s been no interest rate hikes since September, these comments tell us one of two things, which is either the Fed has finally figured out where the neutral rate is or they believe that a pause in tightening is necessary. Chances are it’s the latter because economic data has been weakening, stocks have been falling and lower oil and gas prices restrict rather than encourage inflation. As a result, consistent rate hikes may no longer be needed. While a surprise, Powell’s comments are not a game changer for the US dollar because investors are already pricing in less aggressive tightening. Fed fund futures show only one full rate hike for 2019 compared to the Fed’s forecast for 3 hikes next year. Still, if Powell’s semi-annual testimony on the economy and monetary policy is less hawkish, it will be very difficult for the dollar to rally as it would confirm that the Fed is preparing to pause early next year. The non-farm payrolls report comes after Powell’s speech and will have a greater impact on the dollar if it confirms a slowdown in the economy. Good data like the ones that we saw last week including personal income, spending and the blockbuster Chicago PMI report won’t have a lasting impact on the greenback.

All The Reasons Why EUR Could Fall Further

In contrast, euro has been under pressure because data is weak and tariffs on autos could be levied at any time. Even ECB President Draghi is worried. In his speech last week, he described recent economic data as softer than expected and said that while some of the slowdown may be temporary, prevailing uncertainties call for patience. Draghi also felt that world growth momentum has slowed considerably and while inflation has been going up, it is expected to decline in the coming months. The central bank is still expected to end bond purchases in December but the usage of the words “at current time” to describe their plans to halt bond buying raised some concerns that they could reconsider if the global economy weakens materially over the next few weeks. Since we don’t expect a shock in the financial markets before 13th of December monetary policy meeting, the ECB should go ahead with ending bond buys but the move could be diminished by dovish guidance and lower economic projections. There are no major Eurozone economic reports scheduled for release next week.

Is The Brexit Vote Reversible? The European Court Of Justice Decides

Sterling also ended the week near its lows as the market waits for Brexit updates. Prime Minister May said that Brexit is irreversible but the European Court of Justice will decide on the 4th of December whether Britain could reverse this decision. If they say yes, it would spark a flurry of speculation about a second referendum that could plunge the UK into deeper uncertainty. If they rule no, it will kill any hope of returning to prior relations – so either way it’s a lose-lose for the pound. The most important date is the 11th of December , when Parliament votes on the current Brexit deal and between now and then we don’t expect any meaningful recovery. This is true even though health of the UK economy will return to focus a speech by Bank of England Governor Carney and UK PMIs scheduled for release.

RBA Has No Reason To Alter Neutral Bias

Commodity currencies will also be on the move with Reserve Bank of Australia and Bank of Canada monetary policy announcements this week. The Australian dollar is strong because despite all of China’s trade troubles, Australia’s economy is holding up well. Taking a look at the table below, the labor market is improving, consumer confidence is up and home loans have increased. But neither we nor the RBA knows how long this will last particularly with business confidence, service and construction activity slowing. As a result, the RBA will most likely maintain its cautiously neutral outlook, which should not have much impact on the Australian dollar. Instead, AUD/USD could have a bigger reaction to the latest PMI reports, third-quarter GDP and October retail sales. The risk is to the upside in our opinion because data has been good. 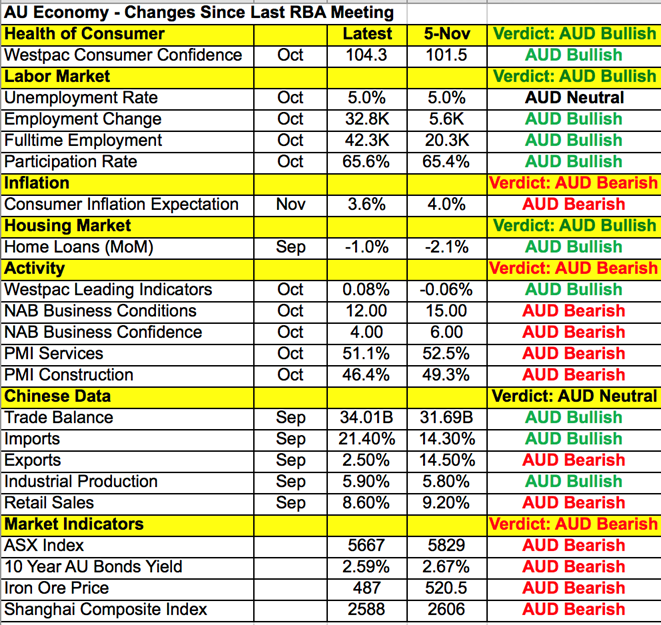 The Bank of Canada on the other hand has more to consider. They raised interest rates at their last meeting and dropped the word “gradual” from their comment on future hikes and upgraded its assessment of exports and investments. These hawkish adjustments sent the Canadian dollar sharply higher and the market thinking about a strong tightening cycle next year. However oil prices have fallen sharply with the cost of crude dropping more than 25% since their last meeting. The price of Western Canada Select the primary blend sold by Alberta’s oil sands fell another 12%. However economic data hasn’t been terrible. Retail sales are up, the unemployment rate is down, inflation is well above 2% and the manufacturing sector is growing strongly. So these economic reports justify the BoC hawkishness. If they disregard the decline in oil and continue to talk about the need to normalize monetary policy, 1.33 could end up being the peak for . While important, Canada’s Friday employment report should be less market moving than the monetary policy announcement because by then we’ll know where the BoC stands. 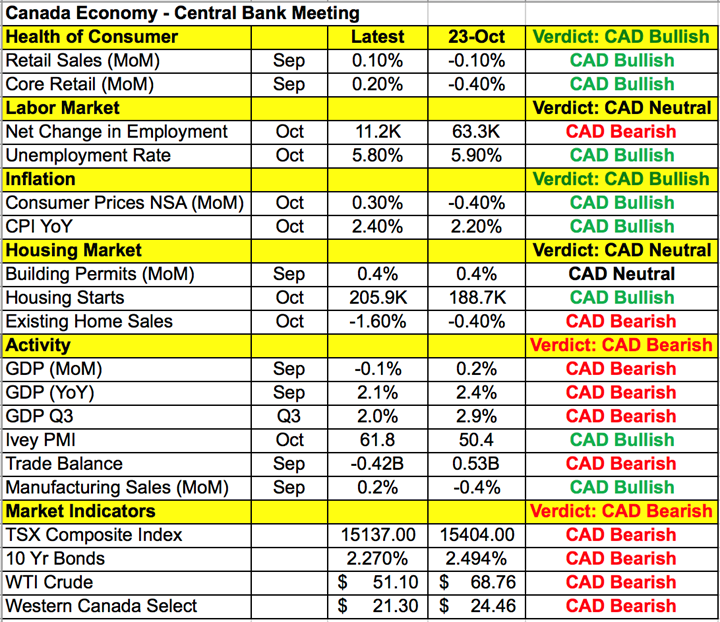 Meanwhile there was very little rhyme or reason to the outperformance of the New Zealand dollar last week because retail sales and the trade balance were significantly weaker than expected. The only explanation is that the oversold conditions of the currency allowed it to benefit the most from short covering when the US dollar started to fall.