Last budget before the election

On March 19, Finance Minister Bill Morneau will present his fourth budget to Canadians and financial markets. It will be his last budget before the general election to be held before or on Oct. 21. The Liberal government is likely to campaign on the announced measures and fiscal framework that will be presented that day. In this note, we highlight what to look for in the budget.

The Canadian economy is in stagnation, a much worse situation than a year ago when global economic momentum was strong. Particularly, the rising number of consumer insolvencies, fading consumer spending and the cooling in activity in some housing markets calls for action. Notably, the federal government is apparently looking to improve mortgage accessibility for millennials. The budget will allow us to find out what form the new targeted housing policies will take. The bar to lower the 200 basis points B-20 mortgage stress test for everyone appears high since it has successfully prevented the most financially vulnerable households to get a mortgage. Instead, a tweak to this stress test reserved for first-time home buyers, a more generous first-time home buyers tax credit, or an increase in the maximum amortization period from 25 to 30 years for insured loans appear more likely.

How big is the federal deficit and is it an issue?

In the 2018 Fall Economic Statement (FES) presented last November, the federal government anticipated an $18.1-billion deficit for FY 2018-19. It represents 0.8% of nominal GDP and 5.5% of revenues. Admittedly, this is a small deficit. In comparison, the Congressional Budget Office estimated that the U.S. federal deficit for 2018 would reach 3.8% of GDP, almost five times higher than Ottawa’s shortfall. In FY 2017-18, Canada’s general government deficit, including provinces, territories and local administrations, stood at 1.0% of GDP (chart 1). The average G-7 deficit-to-GDP ratio was more than three times higher at 3.4%. Also, the current federal government budget shortfall is much smaller than the uninterrupted 21-year deficit era of 1975 to 1996, a period of fiscal unsustainability that led to credit downgrades in the early 1990s.

While the size of the current deficit is not an issue, its nature is. For instance, economists often deconstruct a government’s budgetary balance into two parts. The first part is cyclical and related to economic performance. It is, in some way, independent of fiscal policy. The second part is structural and measures the fundamental gap between government revenues and expenditures in “normal” economic circumstances. According to the Department of Finance’s estimates, in 2017-18, the last fiscal year for which numbers are available, the federal deficit was almost entirely structural (over 90%, chart 2). This contrasts with FY 2015-16 and 2016-17 deficits where more than half was explained by weaker economic momentum; mainly the oil shock. 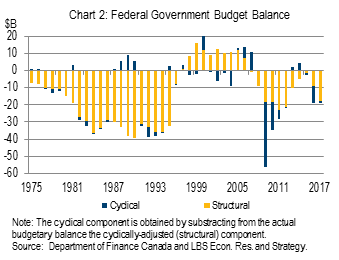 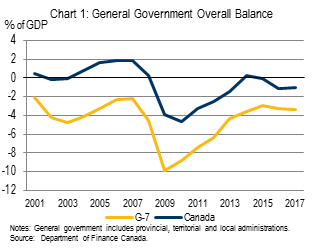 This could have several ramifications. Under the optimistic scenario that the economy grows faster than potential, as it clearly did in 2017, the structural deficit is not necessarily going to shrink. The fundamental imbalance between what the government spends and what it takes in revenues could persist. Under the pessimistic scenario of a recession, the federal government would incur a larger deficit with both a cyclical and a structural component, similar to 2009 and 2015. This would put significant pressure on public finances at a time of high economic uncertainty and financial markets volatility. To be clear, this is not a condemnation of expansionary fiscal policies. The government should implement new policies as long as it respects fiscal sustainability.

We believe that the deficit for FY 2018-19 will come out lower than previously forecasted. First, the Parliamentary Budget Office (PBO) forecasted in February that the shortfall will come in at $16.0 billion versus $18.1 billion in the FES 2018 simply because the government is unlikely to use its $3.0-billion contingency reserve. Second, the Department of Finance’s fiscal monitor for December 2018 reported that, for the first nine months of FY 2018-19, the Government of Canada posted a budgetary surplus of $0.3 billion, compared with a $19.3-billion deficit in FY 2017-18. While governmental spending is usually stronger in the last three months of the fiscal year (from January to March) and could reduce the discrepancy, this $19.6-billion difference poses a serious upside risk to the federal budgetary balance.

The government will, therefore, have the choice between posting lower deficits in FY 2019-20 and beyond or use this wiggle room to introduce new spending measures. The latter of the two options is, in fact, what happened in the 2018 FES and Budget 2018. Considering the structural nature of the deficit and that the federal debt-to-GDP ratio is barely declining, a broad-based tax cut for individuals appears unlikely since it would imply a rising public debt burden. Also, we would be surprised if the 2019 budget includes a wide array of measures for companies. After all, the 2018 FES included the accelerated deduction for business capital investments. There is nothing Ottawa can do if global uncertainty is weighing on sentiment and preventing some Canadian companies from going ahead with their facility expansion.

Moving towards a national pharma-care program?

One major policy likely to be discussed in Budget 2019 is a national pharma-care program. It is unclear, however, if new funding for universal prescription coverage will be included in the budget. Every province has its own mix of private and public drug prescription coverage. This patchwork of insurance plans is inefficient. First, drug expenditure per capita in Canada ranks as the third highest in the OECD (behind the U.S. and Switzerland). Second, many Canadians do not have access to the medication they need due to steep prices and insufficient coverage. A universal pharma-care program with the entirety of the costs assumed by the federal government would cost $19.3 billion per year, according to the PBO. This would more than double the current deficit. However, it is unclear if the federal government has made up its mind on the issue in time to incorporate the fiscal impact into their budget. An advisory council appointed about a year ago will recommend the optimal approach for implementing a national pharma-care program. While the council’s final report is expected after Budget 2019, the Interim report published last week recommends developing a list of essential drugs that could eventually be made accessible to all Canadians under a federal program. The federal government could propose, later this year, the creation of such an initiative for 2020 as part of their election campaign. The Government of Canada would likely bear the cost by transferring new funding to the provinces, which would ease financial pressures. Indeed, we believe that the most likely scenario is that the new federal program will preserve private sector and provincial public coverage that goes beyond the essential medicine formulary. The cost of this program could vary greatly depending on its scope, but would likely be less than the $19.3 billion PBO estimate if partial prescription drugs coverage is proposed.

What to watch for in the debt management strategy

Finally, investors will pay attention to the following elements of the 2019-20 debt management strategy.

First, at the beginning of the last fiscal year, the Government of Canada intended to increase the supply of treasury bills from $125 billion to $138 billion by the end of March 2019 on the back of market liquidity concerns. With only one more T-bills auction remaining in 2018-19, we believe that the government has reached its objective of increasing the outstanding amount of T-bills, falling slightly short of its $138-billion objective by $5 billion-$10 billion. Despite the increase in supply relative to the previous year, liquidity in the T-bills market is still an issue. A simple measure of supply/demand for T-bills such as the difference between the one-month T-bill rate and the overnight target rate shows only a slight improvement since mid-2017 (see chart 3). Granted, the gradual disappearance of market expectations of BoC rate hikes also pushed down T-bills yields relative to the fixed overnight recently.

Second, the government decided last year to reduce gross bond issuances from $138 billion to $115 billion. This strategy resulted in a mixed bag in terms of risk-return for the government. The yield curve has shifted down for maturities longer than one year and is also flatter. It would have been an interesting opportunity to lock in longer-term bond issuances at lower rates. But in hindsight, rates expectations were much higher in February 2018, when last year’s debt management strategy was unveiled. FY 2019-20, the government could be tempted to use the currently low and flat yield curve environment to issue more in the long end.

Third, while the issuance of ultra-long bonds was put aside in FY 2018-19, the current yield inversion in the CAN 2064-2048 would be favourable from the government’s perspective. Long-term institutional investors could express interest in a new 50-year bond if the right size is issued.

Fourth, the size of the real-return bond (RRB) program has been very stable since its inception. This being said, this sector is less liquid recently due, in part, to the absence of positive CPI inflation surprises, a trend that is likely to continue in 2019. One thing to watch for is a slight reduction in the FY 2019-20 RRB program in exchange for an increase in 30-year nominal bond. However, the 30-10 spread of about 30bps is steeper than a year ago, making it less attractive from the government’s point of view. 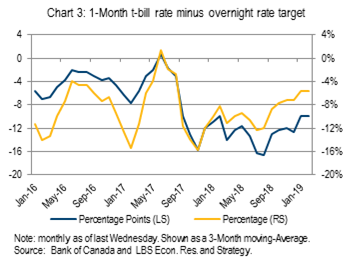