U.S. markets are going through an uncertain phase right now, as last week’s hightened volatility showed. As such, it’s hard to predict what lies ahead.

Stocks recovered some losses over the past two trading sessions, after President Donald Trump announced a delay in some of his latest tariffs on Chinese goods. Trump also said Thursday that discussions are ongoing with China, and that he expects to talk to President Xi Jinping soon.

But that positive signal failed to erase the earlier losses that the market suffered after a strong sell signal from the bond market. The ended the week down 1%, while the lost 1.5% for the week. Amid this risk averse environment, there are still some big earning announcements ahead during the coming week, from different sectors of the economy. We are keeping a close eye on the following three stocks:

Big-box retailer, Target Corporation (NYSE:) will report second-quarter earnings on Wednesday, Aug. 21, before the market opens. Riding on the strength of , Target is expected to report $1.62 a share net profit, up from $1.47 for the same quarter a year ago. Sales are likely to show an increase of 4% to $18.3 billion in the quarter, according to analysts’ average estimates. Following a strong showing this earnings season by some retail peers, including Walmart (NYSE:), Target is unlikely to disappoint investors. 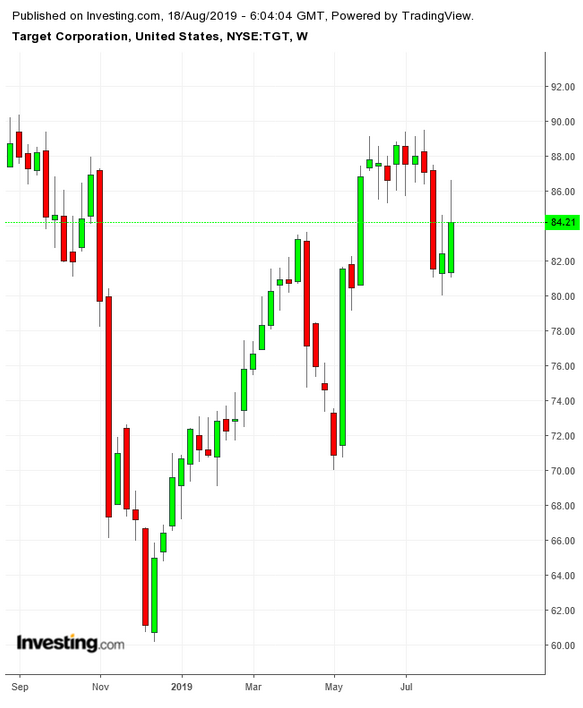 In Q1, Target very strong growth in comparable sales, which rose 4.8%, beating analysts’ estimates.On a call with analysts in May, Chief Financial Officer Cathy Smith, however, dampened expectations by saying that Target’s comparable sales in Q2 will be “somewhat slower” than the previous three months as the benefit from the closures of Toys “R” Us stores slows down. Target’s shares, trading at $84.20 as of Friday’s close, have outperformed rivals this year, rising 30% in 2019.

Salesforce.com (NYSE:), which sells software and cloud-based services to corporate clients, will report its second-quarter earnings on Thursday, Aug. 22, after the market close. On average, analysts expect $0.47 a share profit, while sales are likely to jump 20% to $3.95 billion, helped by a global surge in technology spending.

Despite the company’s of producing blow-out quarters, its shares have come under pressure since the San Francisco-based customer relationship management firm announced in June that it’s acquiring software maker Tableau Software (NYSE:) for $15.3 billion. 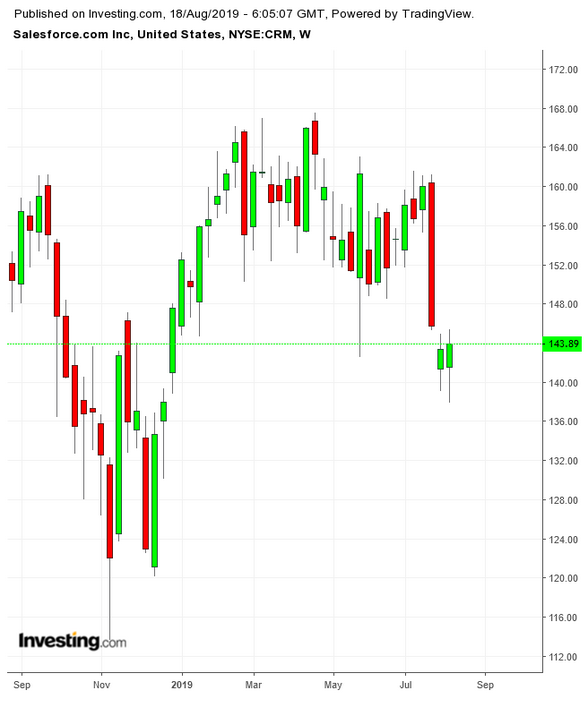 The all-stock deal was Salesforce’s largest transaction ever as part of its move to expand into the business intelligence market. According to the company, the Tableau deal will boost sales this year and bring the company further into competition with software giants Microsoft (NASDAQ:) and Oracle (NYSE:), both of which offer business intelligence tools.

Salesforce shares have lagged the broader market, falling 9% in the past three months. The stock closed on Friday at $143.95.

The hardware and household improvement chain, Home Depot (NYSE:), will be reporting second quarter earnings on Tuesday, Aug. 20 before the open. On average, analysts expect $3.09 a share profit on sales of $31.06 billion.

The world’s largest home improvement chain has pursued a variety of successful strategies during the past few years to fuel growth and benefit from strong consumer spending. In the , however, Home Depot failed to impress investors when the same-store sales—a key gauge of a retailer’s success—rose 2.5%, trailing estimates of 4.3%. 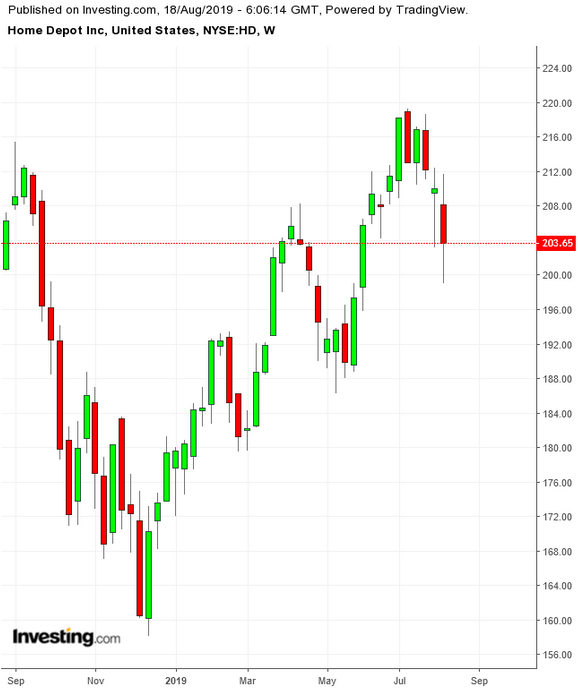 After a remarkable run over the past five years, during which Home Depot) shares—which closed on Friday at $203.64—gained more than 143%, the stock has weakened in the past month, hurt by worries about the economy and the trade tension with China.