7 Things We Expect From Wednesday’s FOMC

The market is a 100% chance of a quarter-point by the Federal Reserve Wednesday, which would be the third round of tightening for the central bank this year. Normally, rate hikes are positive for the currency but this month their guidance could send the spiraling lower. The Federal Reserve has been the most aggressive central bank this year and many investors are wondering if they’ll give consumers a break before taking rates toward 3% in 2019. Based on the futures markets, which is discounting a 75% chance of another 25bp hike in December, investors don’t expect the central bank to slow down. The stock market is at a record high, the labor market is strong and so far, the impact of trade tensions has been limited. However, we are beginning to see signs of weakness. Since the central bank last met, , , and activity slowed. So it could behoove the Fed to take a break before barreling ahead in 2019, especially with hovering near 1-year highs.

7 Things To Know And Watch At September’s Fed meeting

1. The Fed WILL raise interest rates by 25bp

3. This is the FIRST time that 2021 forecasts will be included

5. For your reference – in June, Fed upgraded its , and forecasts

6. This will be the FIRST time for Vice Chair Clarida’s estimates

7. Key Question: Will the Fed suggest that rate hikes need to slow down?

Since a rate hike is a done deal and we don’t expected any major changes to the Fed’s forecasts. If a change were to be made, it would most likely be in an upgrade. The median forecast should stay unchanged, signaling 3 more hikes in 2019. The main question will be the pace of tightening beyond September. If Fed Chair Powell suggests that it’s time to slow down, the could descend quickly from its highs as it would cast doubt about a rate hike in December. However if he is unambiguously hawkish, the dollar will soar against all of the major currencies.

In the event of a dovish hike, the best currencies to trade will be and . For USD/JPY, 113 would become a double top as the pair heads back below 112. The euro is attractive because ECB President thinks inflation is on the rise. In the event of a hawkish hike, the best currencies to trade should be , and . The RBA has no plans to raise this year, is still vulnerable to Brexit risks and it is becoming increasingly clear that Canada will not be able to strike a trade deal with the U.S. before the September 30 deadline. The only risk for the USD/CAD trade is that President Trump plans to hold a press conference at 5pm on Wednesday. He’ll be talking about the “news of the day,” which could mean either the Canada-Mexico trade deal, Kavanaugh nomination, Rosenstein’s fate or all of the above.

Lastly, here’s a look at how the US economy changed since the last FOMC meeting. 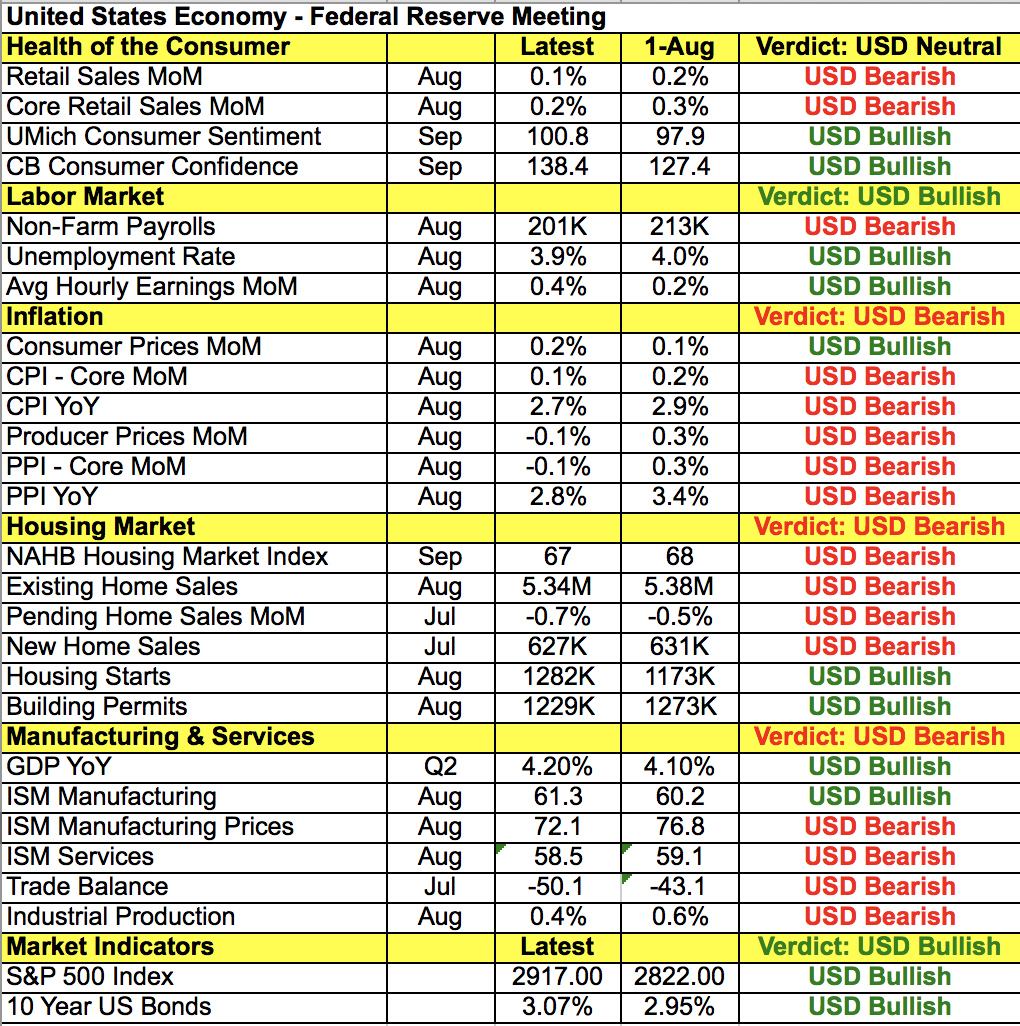