A War to Trade More, Not Less

– The key issue of US-China trade tensions is how quickly China is moving towards a market-oriented economy.

– 2006 was a turning point for trade relations when the USbelieved China’s market liberalization slowed.

– Measures introduced by China between 2016 and 2017 rekindled concerns by the US, landing us in the situation we find the two countries in today.

Even since US President Richard Nixon visited China in 1972, the US and China have had a long history of trade disputes. More recently, since 2001 when China became member of the World Trade Organization (WTO), the US and its Western allies have been pressuring China to reform its trade regime, a process known as trade liberalization.

In particular, the US has pushed for liberalizationin areas such as intellectual property rights, industrial policies, agriculture practices and legal framework; much of these efforts are still on-going today. The fundamental underlying issue that divides the two countries is the process and speed by which China moves from a state-led economy to a market-oriented economy.

For the US, the process of liberalization will determine whether it canexport anything and everything that it wants to sell to China, andin turn purchase all that it wants to buy from the Chinese market. Yet progress has been slow, so the US has been threatening China with introducing new tariffs.

In this trade relationship, tariffs are used as a penalty to punish the counterpart if either no or slow progress is made towards its desired direction. The penalties could reduce trade volume in the short-term and raise costs all around. Yet, somewhat paradoxically, the end goal of US threatening a trade war is to trade more with China, not less – the US just wants it done on more favorable terms.

For China, increasing trade with the US is desired as well. At the same time, curbing financial risks as well as developing internal growth momentums have been set as top priorities by the government. China has been working to strengthen regulatory oversight and promote domestic innovations. These measures serve China’s long-term goals, though China’s trade partner may not fully welcome them. This adds more nuance to the bilateral relationship – which already has many points of tension.

Trade Between China and the US Continues to Grow 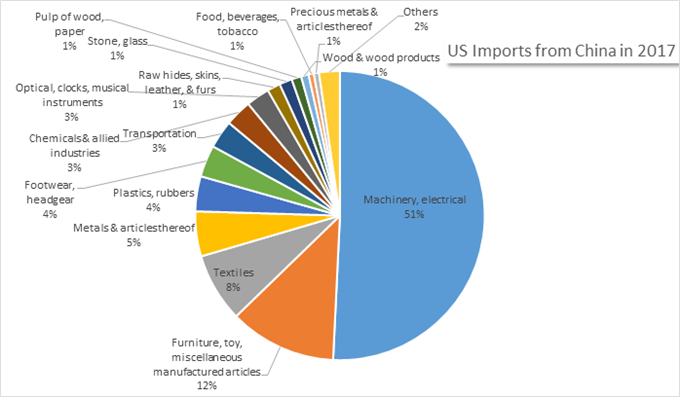 A History of the Up and Downs in US-China Trade

From the mid–1990s to 2002, China implemented “dramatic and rapid reform on state-owned enterprises (SEOs),”as stated in the annual report that the US Trade Presentative delivered to the Congress. This was one of the reasons that US supported China’s WTO accession. From 2001 to 2005, the US-China trade relationship boomed and the US admitted that “China has taken significant and often impressive steps to reform its economy” and that “the US has benefited significantly.”

The year of 2006 was a turning point however, when the US saw that China’s “market liberalization slowed.” Over the next seven years, US-China trade volumes continued to “expand rapidly”; at the same time, conflicts between the two parties increased and intensified. In 2013, China announced to let ‘the free market’ play a decisive role, a direction that the US “was encouraged” by. However, just three years later, the two countries encountered major disagreements on whether China has realized significant economic reform and implemented enough changes in the trade regime.

In 2017, the US claimed that the situation of China’s state-led economy was “worse today than it was five years ago”; China held a different opinion on that. In addition to many long-lasting disputes in intellectual property (IP) rights and agriculture areas, China’s Made in China 2025 plan (2015), National Security Law (2015) and Cybersecurity Law (2016) worried the US that foreign technology will be replaced by Chinese technology. Despite of rounds of high-level bilateral meetings in 2017, the two parties did not reach a consensus on whether China has made enough changes to its trade and investment regime; this impacted a bulk of detailed issues, leading us to the situation we’re in today.

In forthcoming write-ups, we will examine the particulars of how trade tensions are unfolding today and how they may impact FX markets moving forward.