HomenewsAnalysisAfter Years Of Stability, Interest Rate Volatility Is Back. Here’s Why

After Years Of Stability, Interest Rate Volatility Is Back. Here’s Why

Following several years of low interest rates and depressed yields on sovereign debt, the double whammy of increased political uncertainty alongside tightening monetary policy have raised the heat in financial markets. And it’s a close race to see which will drive greater volatility.

Italy recently grabbed the spotlight on the political uncertainty front. Concerns over the formation of its anti-establishment, euroskeptic government sent bond yields soaring to a four-year high. The selloff in Italian bonds—bond prices move inversely to yields—saw the yield on its government debt jump more than a full percentage point to as high 3.388%. With anti EU parties Five-Star Movement and the League forming a coalition government, investors worried that the possibility of a eurozone breakup was back on the table. 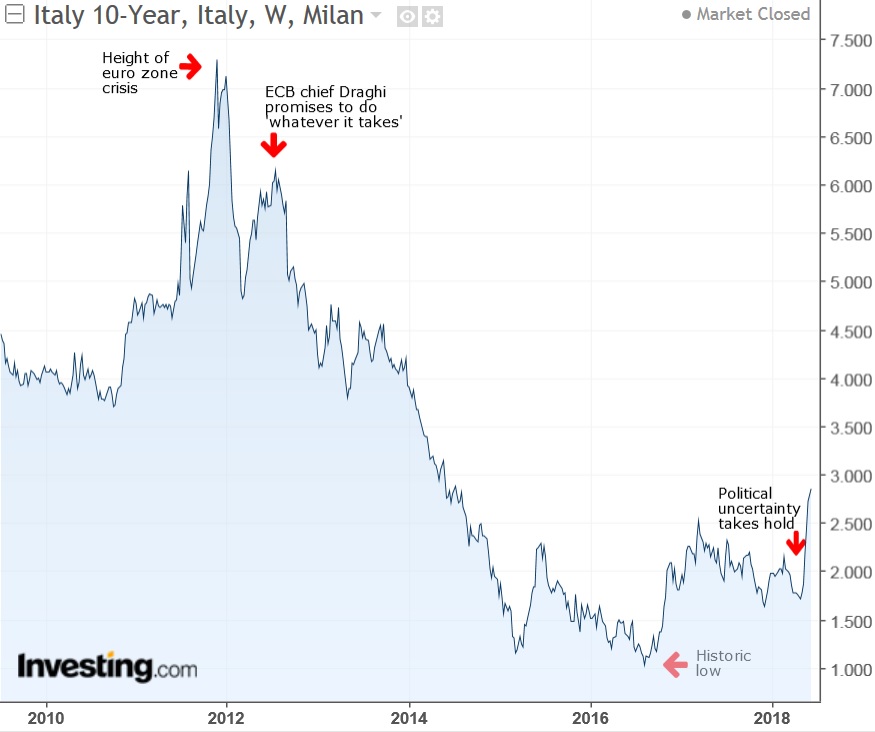 Although yields are still a far cry from the above 7% position seen at the height of the 2011 eurozone crisis, political worries continue to drive volatility in Italian markets. A certain sense of relief arrived earlier this week when new Italian Economy Minister Giovanni Tria said that none of the country’s parties wanted to leave the Union, sending Italy’s bond yield back below 2.6%.

However, the past two days have seen a renewed spike in risk as Italian Prime Minister Giuseppe Conte promised to increase the debt-laden country’s coffers, explaining that the new spending would be paid for by expanded economic growth. Doubts over the viability of his plan to implement a flat tax system, as well as a variety of other populist initiatives that are part of his agenda, alarmed markets, boosting yields back toward 3%, hitting an intraday high of 2.975% on Wednesday.

Apart from the contagion effects throughout the eurozone, Spain too had its own bout of political instability last week. Its Prime Minister, Mariano Rajoy, was thrown into a no-confidence vote after a court judgement fined the ruling party Partido Popular on a corruption case that, while clearing current members of government, included fraud, tax evasion and money laundering.

The political uncertainty was reflected by a move higher in which topped 1.6% and reached levels not seen since October 2017. The Spanish —the spread between the Spanish government bond and the benchmark German bund—passed 140 basis points.

Uncertainty quickly faded, however, when the likely new Prime Minister, Pedro Sanchez, promised to follow through on a recently passed budget, securing the support of the PNV party from Spain’s northern Basque region. Although concerns still remain, the volatility in Spanish bond yields was relatively short-lived as tensions quickly ebbed. 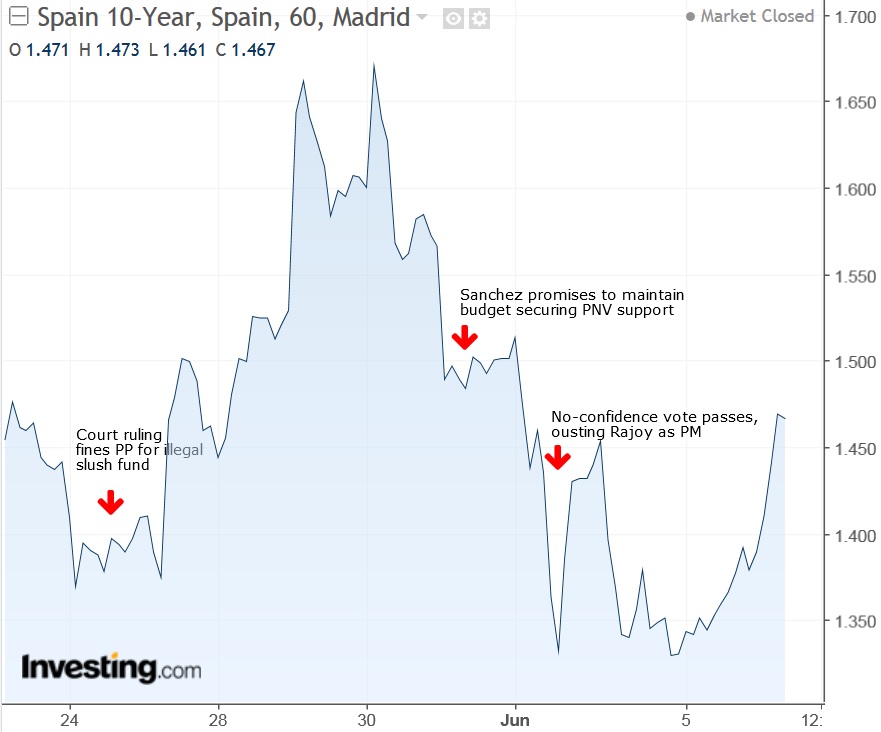 At the time of writing the Spanish 10-year yield has fallen back toward 1.50% while the risk premium dropped back to just above 100 basis points. 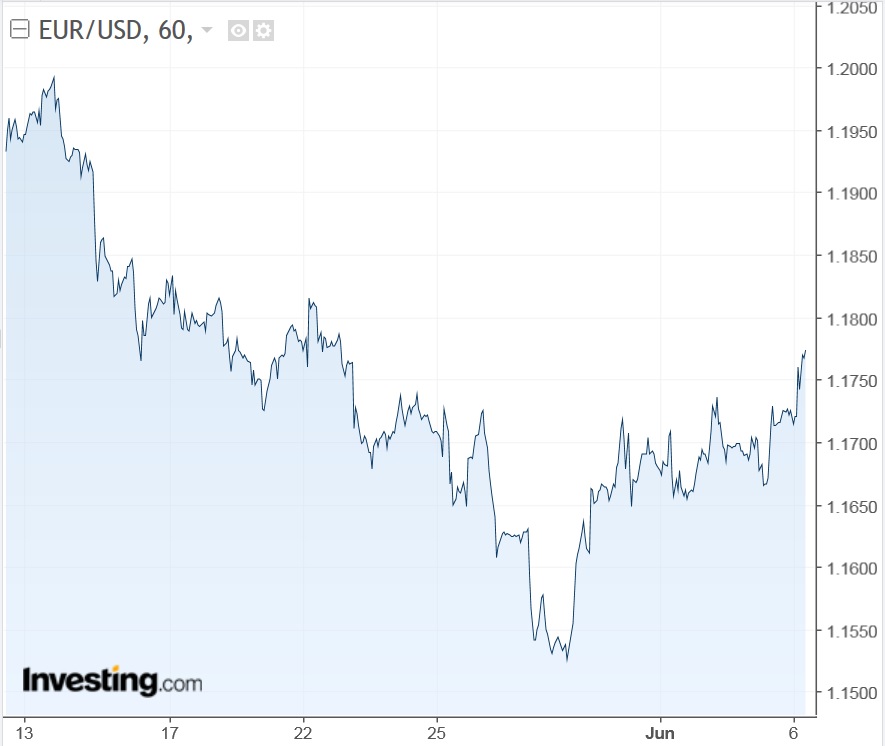 The political uncertainty within the eurozone, particularly poignant in the case of worries over Italy’s possible departure from the currency block, also pummeled the , sending the single currency to nearly $1.15 on May 29, its lowest level since July 2017.

Politics, however, aren’t the only market-moving game in town. Hawkish monetary policy has also sent financial markets on a wild ride.

In an emergency meeting on May 23, Turkey’s central bank (TCMB) hiked rates by 300 basis points to 16.5%, an extreme move to stop the slide in the country’s which has fallen around 20% versus the dollar just this year. 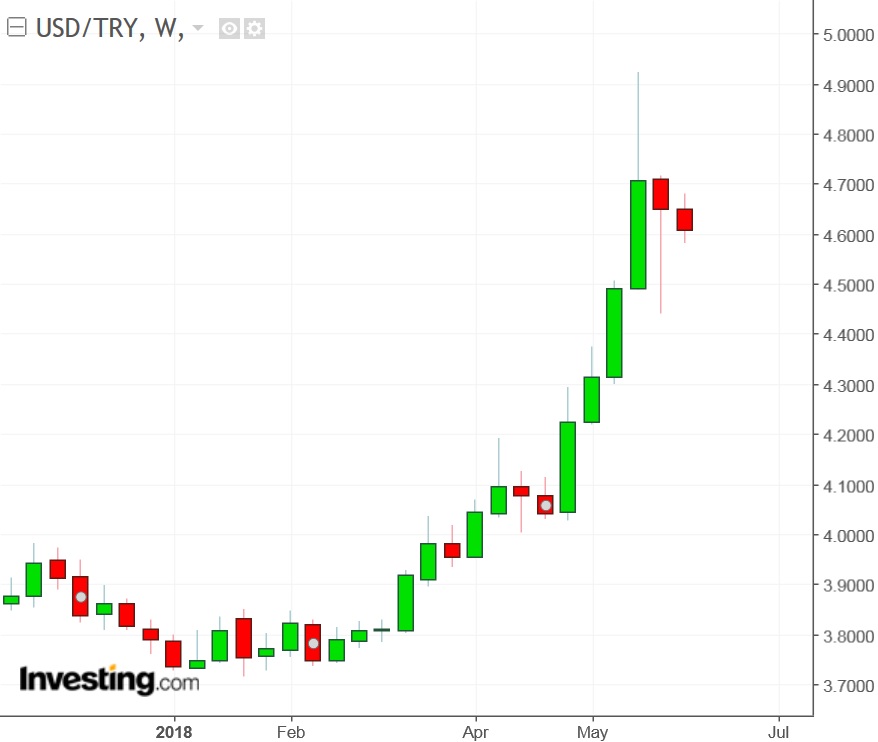 With Turkish annual inflation at an alarming 12.15%, the TCMB is widely expected to make another move when it announces its next today, Thursday.

Not to be outdone, Argentina’s central bank (BCRA) implemented a rapid-fire troika of rate hikes—three in just 8 days. Beginning at the end of April, Argentine interest rates moved from 27.25% to 40%, the world’s highest, in an effort by the BCRA to support the local currency and bring annual inflation down to the central bank’s new 15% target. 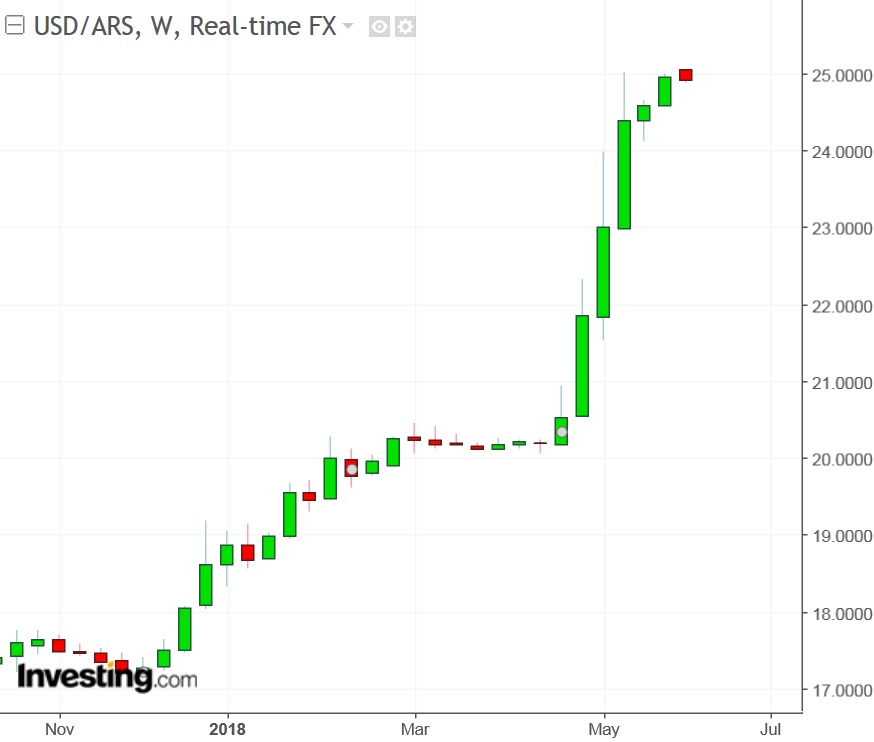 The BCRA left rates at the 40% mark on May 22, explaining that high rates were needed to contain inflationary pressure caused by the country’s weak peso. The hit a record low of $25.0655 on June 3, falling around 35% so far this year against the dollar.

Will The Fed Come To The Rescue?

While political instability in Europe has recently subsided, emerging markets—particularly in those countries under economic stress such as Turkey and Argentina—face a growing threat from the US Federal Reserve’s insistence in moving forward with the gradual removal of accommodative monetary policy.

Indeed, India’s central bank governor Urjit Patel said on Monday that the Fed should reduce the pace of unwinding of its balance sheet to limit the impact of a shortage in emerging markets.

“Global spillovers did not manifest themselves until October of last year. But they have been playing out vividly since the Fed started shrinking its balance sheet,” Patel wrote in an opinion piece for Financial Times. “This is because the Fed has not adjusted to, or even explicitly recognized, the previously unexpected rise in US government debt issuance. It must now do so,” India’s monetary policy chief insisted.

Patel suggested that the Fed could recalibrate its normalization in order to compensate or offset the shortage of dollars caused by issuing US Treasuries to pay for US tax cuts. But Patel’s request seems little more than wishful thinking. Nearly a month ago, Fed chairman Jerome Powell stated that “the role of U.S. monetary policy is often exaggerated.”

In a speech delivered on May 8, Powell said:

“There is good reason to think that the normalization of monetary policies in advanced economies should continue to prove manageable for (emerging markets). Fed policy normalization has proceeded without disruption to financial markets, and market participants’ expectations for policy seem reasonably well aligned with policymakers’ expectations in the Summary of Economic Projections, suggesting that markets should not be surprised by our actions if the economy evolves in line with expectations.”

Given strong expectations for an additional Fed in both June and September, and with markets anxiously anticipating the June 12-13 policy meeting to tap the US central bank’s outlook for a possible further increase in December, other countries would do well to get their own houses in order rather than expect a rescue from the Federal Reserve.