Alberta’s 2018 Budget: Large Deficits And A Long Path To Balance

The Alberta government tabled its 2018 budget in a more favorable economic environment than a year ago. crude oil prices are above US$60 per barrel, thanks to strong OPEC compliance, geopolitical tensions and a healthy oil demand backdrop. As a result, Alberta’s economic is in recovery mode. Migration flows, consumer spending and business confidence have been improving. Alberta has also seen the fastest increase in full-time employment during the last 12 months. Altogether, economic growth exceeded expectations in 2017 and led to a better-than-expected fiscal performance in FY 2017-18. The deficit is now estimated at $9.1 billion, a $1.4-billion upward revision relative to the 2017 budget.

Despite the improvement, the $9.1-billion deficit in FY 2017-18 still represents a large 2.7% of nominal GDP (see chart). Since WTI crude oil prices are not expected to go back to US$100 per barrel, the NDP government is looking at other ways to balance its budget by FY 2023-24.

This new deficit-reduction plan is based on several pillars. The main one is the addition of pipeline capacity by 2021. With Western Canada heavy oil production rising above current transport capacity, the budget projects a large WTI-WCS price differential for the next three years. This is a major headwind since a $US1 permanent widening of the WTI-WCS price gap implies a net fiscal deterioration of $210M (see table). This lack of market access will prevent deficits from shrinking rapidly over the next three years. Once the Trans Mountain pipeline, the Enbridge’s Line 3 and XL Keystone projects become operational, the deficit is projected to fall quickly from $7.0 billion in FY 2020-21 to $4.3 billion in FY 2021-22 (see chart). Despite the recent political tensions around the construction of future pipelines, the budget assumption that these projects will be completed by 2021 seems to be the most plausible outcome.

Also, we see an upside risk on WTI and oil royalties (royalty rates fluctuate based on the price of WTI oil converted into Canadian dollars). The Alberta Ministry of Finance forecasts WTI crude oil prices to increase from an average of US$54 in FY 2017-18, to US$60 in FY 2018-19 and US$63 in FY 2019-20. Monday’s WTI crude oil price was already higher, and we forecast it will reach $US67 per barrel at the end of 2018 as the global oil market tightening continues. Since a $US1 permanent increase in WTI crude oil prices has a net positive fiscal impact of $265 million, we estimate that the annual deficit could turn out to be about $2-billion smaller than projected starting in FY 2018-19. On the other hand, a global economic slowdown, the end of NAFTA, a trade war with China, a breakdown of the OPEC production cut agreement and increasingly higher than expected U.S. shale oil production could lower WTI prices and negatively affect the budget. All in all, it is appropriate to use a somewhat conservative assumption regarding WTI prices for the deficit-reduction plan.

While we believe that fiscal revenues could surprise on the upside, we also see a risk of fiscal cost overrun. The return to a balanced budget is based on the ambitious target of increasing program spending below population growth plus inflation for several years; something the province has not been able to achieve since FY 2013-14. In FY 2017-18 for instance, spending came in $1 billion above 2017 budget expectations.

If everything goes according to the government deficit-reduction plan, the province’s debt-to-GDP will double from 6.0% in FY 2017-18 to 12.3% in FY 2023-24. Borrowing requirements are projected at $15.4 billion in FY 2018-19, higher than in FY 2017-18 despite lower funding needs for capital spending. Following the budget release, the Moody’s agency held the province’s credit rating at double-A with a negative outlook. This being said, there are growing signs that the global economy is already in the late stage of the current cycle. And since Alberta’s economy is generally more sensitive to global slowdown than most provinces, Alberta may no longer be home to the lowest public debt-to-GDP ratio once the next downturn hit.

In summary, the projected improvement of the province’s public finances is primarily contingent on brighter developments regarding Alberta’s oil prices. In other words, the 2018 budget does not propose drastic fiscal policies to rapidly eliminate the long-lasting deficits triggered by the oil price shock of 2014-15. It is proudly mentioned in the budget that “Albertans and Alberta businesses would pay at least $11.2 billion more in taxes and carbon charges if Alberta had the same taxes and carbon charges as any other province.” But the province could eventually decide to use some of this huge unused fiscal capacity to eliminate the deficit faster or to offset the next global downturn. Diminishing its reliance on non-renewable oil revenues further would also speed up the deficit-reduction plan. However, given that the 2019 general elections will be held in less than 15 months, these are not options on the table right now. 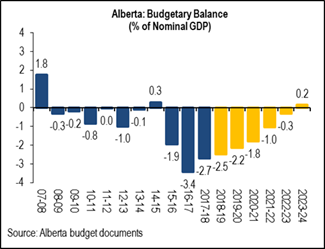 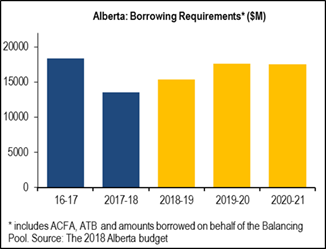