Are Currencies At The Cusp Of A Turn?

The US dollar traded lower against all of the major currencies in the first few days of the third quarter.

While it may be tempting to call this a peak, it is too early for all the bulls to retreat. The pullback in the was modest with the best-performing currency, the New Zealand dollar rising less than 1%. However, all of the major currencies traded higher against the greenback with ending the week above 1.17. rose four out of the last five trading days and while also saw gains, its rally stopped at the top of its 3-week range. Most importantly, ended the week above 110 because even though Friday’s fell short of expectations, the data is strong enough for the Federal Reserve to proceed with raising . Looking ahead, US traders should be back from their holidays and the increased liquidity will expand trading ranges. We expect additional dollar weakness at the start of the week followed by a possible recovery Friday when the Fed releases its monetary policy report. 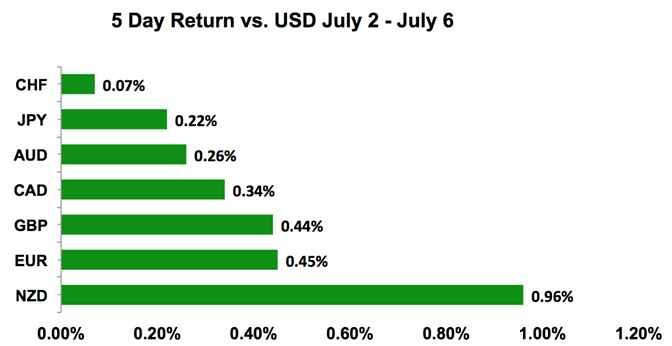 For the better part of this year, the Federal Reserve was the only major central bank raising interest rates and this dynamic fostered a very strong US dollar rally. Although Friday’s nonfarm payrolls report showed a rising unemployment rate and slowing wage growth, on balance, the labor market is firm enough to support one and possibly even two more rounds of tightening this year. This is why USD/JPY did not sell off materially last week. However, other central banks are finally gearing up to raise interest rates and this shifting dynamic will at a minimum lead to additional profit taking of long dollar positions against those currencies and encourage investors to establish long positions. More specifically, the and the are likely to tighten this year (BoC could hike next week!) and the moves that we’ve seen so far in and do not fully reflect that possibility. So while the dollar may hold strong against currencies such as the Japanese yen and , it could see further weakness against the loonie and sterling as long as Brexit doesn’t get messier.

Even the could enjoy additional gains as long as last week’s string of positive data surprises continues this week. However everything is subject to headline risk – if President Trump rolls out another round of tariffs on China or China retaliates in new ways, the risk-on rally could turn into a risk-off decline that renews the greenback’s gains. Looking ahead, the most important event risk on the US calendar this week will be the release of Fed Chair for the semi-annual congressional testimony. While the Fed believes that the economy is strong, the latest FOMC revealed concerns about global trade tensions, worries that are likely to be reinforced by Powell. Outside of that, the only piece of data that could have a meaningful impact on the dollar will be Thursday’s report.

should be trading much higher but unfortunately, Prime Minister May’s unpopular Brexit plan is hampering the currency’s rally. May is having a very difficult time gathering internal and external support for her complicated customs setup. Apparently her own Brexit negotiator, David Davis thinks her new idea will fail. Shortly after writing to May, there were reports that Germany also sees her plan as unworkable. Whatever plan she reaches needs not only support from her ministers but also the EU. This is a long tough road ahead for the Prime Minister and while all of this resistance suggests the eventual outcome will be a tighter relationship with the European Union and a more favorable environment for U.K. businesses, the market currently views any setbacks in the negotiations as GBP negative. Yet we believe that it won’t be long before investors shift their focus to the prospect of this year’s first Bank of England rate hike.

Last week’s economic reports showed widespread improvements in the UK economy. The , and sectors all saw improvements in the month of June that took the composite PMI index to its highest level in 8 months. BoE Governor feels that the slowdown in the first quarter was temporary and that protectionism will stoke inflation. He also said a tighter policy will be needed and “they have enough information to make their decision in August,” implying a readiness to raise interest rates. Investors are pricing in an 80% chance of a hike next month and given the underperformance of the currency especially against the euro, it is only a matter of time before sterling catches up. should be trading closer to 87 cents than 90 cents. More BoE officials are expected to speak this week and we believe they will echo Governor Carney’s hawkish sentiment.

Thanks to a strong of positive developments, rose to a 3-week high against the US dollar. After reaching a deal with the EU on migration, Angela Merkel averted a collapse of Germany’s government by securing an agreement with her coalition partner the Christian Social Union. There were also reports that the US Ambassador to Germany is working on eliminating car tariffs between the US and Europe. While there hasn’t been an official deal or a tweet by President Trump on this issue, if true it would be an important step in reducing EU-US trade tensions. Eurozone data also surprised to the upside with German rising for the first time this year and following suit. Eurozone PMIs were revised higher in June, increased and consumer spending in Germany rose according to the PMIs. However, despite all this good news, it is important to remember that the European Central Bank has no plans to raise this year. Also Merkel’s deal to hold her government together is subject to factors outside of her control. She has agreed to set up transit camps at the border and to turn some away but the terms of the deal with the CSU requires that Austria and Hungary agree to take back some of the migrants and it’s not clear whether they will agree. If Austria and Hungary say yes, then we could see a stronger near-term recovery in the EUR/USD as the deal removes the risk of new elections in Germany and preserves the stability that Merkel has brought to Eurozone’s largest economy. If they resist, EUR/USD could find its way back to 1.16. Germany releases its and balance this week along with the survey – these reports should have only a brief impact on the currency.

All three of the commodity currencies traded higher last week with the New Zealand dollar, which fell the hardest in June experiencing the strongest rally. However, this should be nothing more than a dead cat bounce because NZD fundamentals remain weak with global falling 5%, the largest decline this year. Dairy producers are worried that the price of one of the country’s most important products could fall further due to strong supply and trade tensions. So while is rising on short covering we expect limited gains especially as the upcoming manufacturing PMI could reflect the deterioration seen in and confidence.

The Australian dollar’s rally could be more durable, especially against the New Zealand dollar. The Reserve Bank of Australia is in no rush to raise but when they met last week, they said they see progress in the labor market and a gradual pickup in inflation. However with “inflation likely to remain low for some time,” and weakness dampening external demand, we do not see a rate hike from the RBA until next year. This week’s and confidence reports could show the effect of these recent developments from yuan weakness to China-US trade tensions. spent the better part of last week in a tight range. There’s a lot of resistance between .7430 and .7520. A strong break above 75 cents is needed to change the currency’s trend.

The will be in focus with a Bank of Canada on the calendar. Unlike the RBA, investors are banking on a rate hike from the BoC. Despite mixed labor data, rate hike expectations sit at 88% for this month’s meeting. When we last heard from BoC Governor at the end of June, he said: “financial markets understood our message from May.” At the time, they removed their “cautious” phrasing on rates, sending the Canadian dollar sharply higher. Although the loonie proceeded to fall to 1-year lows as NAFTA talks broke down, rising oil prices and the BoC’s optimism caused USD/CAD to peak at the end of June. We expect USD/CAD to extend its slide ahead of the monetary policy announcement as investors position for an increase in Canadian rates but traders should beware of a dovish hike given the deterioration in spending, inflation growth and manufacturing activity since the last policy meeting. 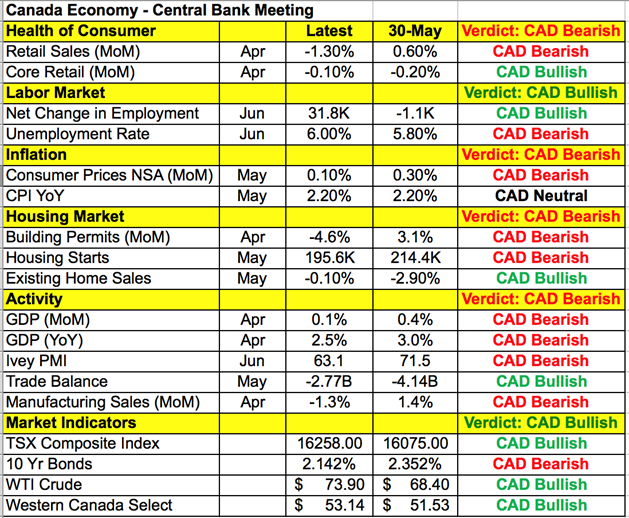