US equity futures are softer with the latest catalyst stemming from the rising political unrest in Hong Kong, in which Hong Kong’s airport had to ground all flights. Notably the Japanese Yen, Swiss Franc and Gold have been the beneficiaries.

ARS: To put it lightly, the Argentinian Peso has capitulated this morning, with the currency dropping nearly 25% against the US Dollar to breach through the 60.00 mark. Consequently, this has dragged other Latam currencies lower with the Brazilian Real slipping past 4.00 against the greenback while the Mexican Peso has dropped 1.4%. Primary elections in Argentina showed voters rejecting President Macri’s policies with the opposition candidate Alberto Fernandez winning by a 15ppt margin, consequently raising concerns that populist policies may soon make a return after the October election.

JPY: Rising geopolitical tensions across the globe and continued uncertainty surrounding trade wars keeps the Japanese Yen on a path for further appreciation. Safe-haven flows have seen USDJPY make a test of the 105.00 handle, having a hit a low of 105.06, however, $1.6bln worth of vanilla options has helped the 105 level hold for now. 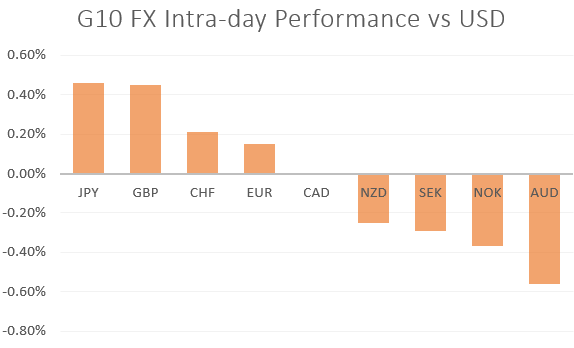