HomenewsAnalysisAs Investors Gloat Over Oil, Ethanol Hopes To Catch Some Of The Momentum

As Investors Gloat Over Oil, Ethanol Hopes To Catch Some Of The Momentum

A month ago, almost every investor we knew was souring on oil. Ethanol, the bioefuel mandated as additive to motor fuels in many countries, was even further from everyone’s mind. Now, with over the past three weeks, people can’t stop talking about oil—while ethanol continues struggling to gain more attention. 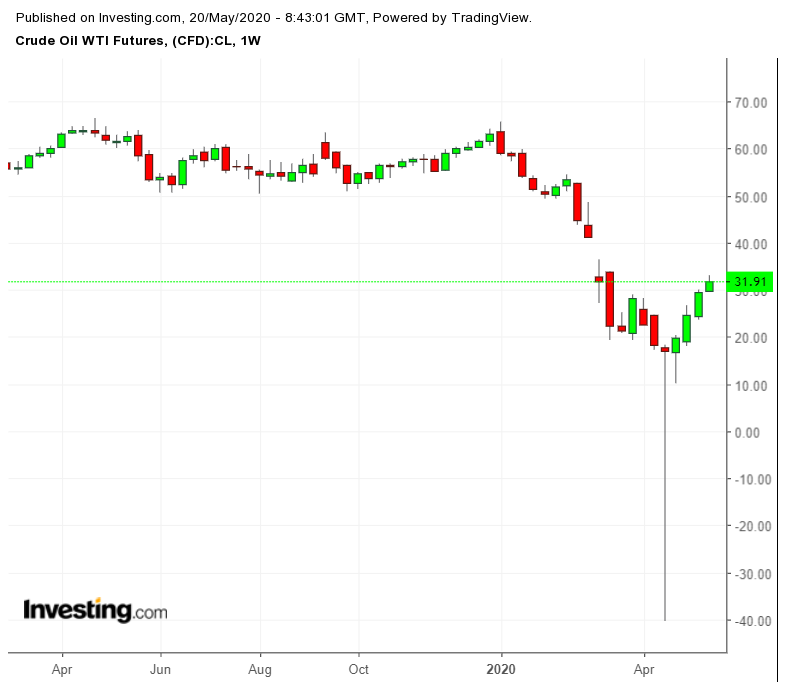 Since oil prices bottomed on April 28, U.S. crude’s benchmark has gained some 220% to stand at above $32 per barrel in Tuesday’s Asian trading, ahead of its regular New York session. Chicago-traded , in contrast, were up just 25% in that period. 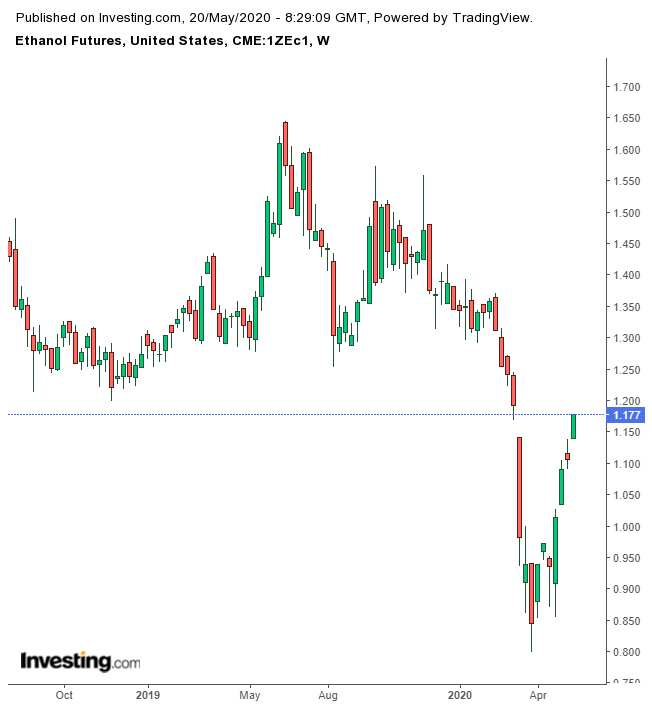 “The same factors affecting ethanol demand are affecting demand for other biofuels,” Jack Scoville, an agricultural analyst at the Price Futures Group in Chicago, said in a blog on Monday.

“People are driving less due to the coronavirus and even reduced crude oil production has not been enough to lift prices to profitable levels for biofuels producers.”

It isn’t surprising that ethanol hasn’t rallied as much as WTI as it’s just an additive. Logic tells us that the primary commodity—in this case, crude—should lead the run-up. And oil drillers have certainly done a lot in the past two months to lead the rally—shutting down more than 60% of and a significant-but-unquantifiable number of wells that have collectively taken 1.5 million barrels off the record high production of 13.1 million barrels for U.S. crude in mid-March.

Ethanol Makers Have Slashed Production Too

But ethanol producers have not been sitting idle either. To use the same expression, until last Monday, manufacturers had idled about 130 ethanol-making plants either fully or partially as gasoline demand remained below desired levels despite a pick up from the 50-year lows seen in April.

“The situation is dire,” the groups said in a letter last week to Nancy Pelosi, House Speaker in Congress, and Mitch McConnell, the Majority Leader in the Senate.

“America’s biofuel plants purchase annually more than one-third of U.S. corn and soybean oil, and that loss of those markets has depressed farm income and will continue to push corn and soybean prices down dramatically.”

Investing.com’s Daily Technical Outlook for corn has a mixed Buy/Sell call on corn. But it still projects a top-end resistance of $3.29 versus Tuesday’s trade at $3.19, giving it a modest potential gain of 3%

Futures of , another major source of ethanol, have done relatively better than corn and soyoil so far, rising 16% over the last three weeks while remaining 19% down on the year.  At Tuesday’s price of 10.82 cents per lb, Investing.com’s Daily Technical Outlook regards raw sugar as a “Strong Buy.” The top-end forecast of 11.29 cents for raw sugar means the commodity still has room for a 4% upside. 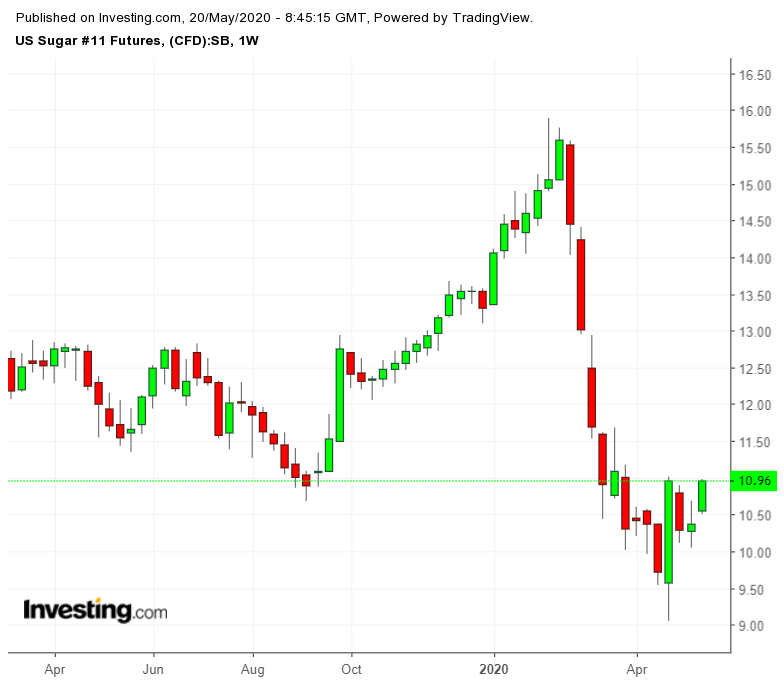 The biofuels groups that wrote to Pelosi and McConnell noted that the stimulus passed by the Trump administration did not have specific relief for biofuel companies. The USDA’s approval of using Commodity Credit Corporation funds to help agriculture also provided nothing for biofuels, they said.

Without such aid for cash flow, the capacity for plant reopenings and ethanol production will be lower. That should actually boost the fundamentals of ethanol, improving its upside for gains.

Even with current difficulties, some shuttered ethanol plants have resumed operations. Andersons CEO Pat Bowe said its ethanol-making facilities in Albion, Michigan and Dennison, Iowa were back up and running. Yet, the company sees itself operating at only half-capacity across its 5 plants for the second quarter. The catalyst for the Iowa reopenings, he explained, was the pick up in driving demand, evidenced by the drop in over the past three weeks.

“It looks like demand destruction from COVID-19 could be in the rear-view mirror (and) ethanol producers who have survived this onslaught will be able to re-start their engines,” said Dan Flynn, who writes the daily ethanol report for Price Futures Group.

Meanwhile, a bigger battle is pitting corn farmers, who provide the largest U.S. feedstock source for ethanol, against the refineries that produce gasoline.

Both lobbies are pushing governors in key U.S. states to get a favorable outcome to the 2020 Renewable Fuels Standard’s proposed blending obligations. The new code calls for at least 20.09 billion gallons of total renewable fuel a year—15 billion gallons from conventional biofuel and 5.09 billion gallons from advanced biofuel. The corn lobby is in favor of the ruling, while refiners are against having so much renewable fluids thrust upon the fossil fuels industry each year. The current mandate for ethanol is gasoline is 10%.