As anticipated, Asia Pacific benchmark stock indexes followed Wall Street higher. There, the S&P 500 and US Dollar gained following the outcome of the 2018 US midterm elections. However, most gains in Asian stocks were as a result of gaps to the upside as subsequent follow through was notably lacking. The Nikkei 225 was up almost two percent, lead higher by all of its sectors.

Outside of Japan, Chinese and Australian equities also rose. The Shanghai Composite rallied about 0.36 percent while the ASX 200 gained about 0.53 percent. Financials and health care were the notable driver of positive performance in the latter. South Korea’s KOSPI also climbed, rising about 1.56% which was its highest in about two weeks.

Not surprisingly, the anti-risk Japanese Yen edged lower against its major counterparts. Other major currencies were rather quiet. Meanwhile, fundamental and technical warning signs may precede a bearish reversal in AUD/CAD. The Philippine Peso appreciated following softer-than-expected third quarter economic growth. GDP clocked in at 6.1% y/y versus 6.2% anticipated. Local officials hint that better performance may come in Q4.

Perhaps the rather quiet trading session is appropriate given that we still have the Fed rate decision later today following the US midterms. Fed funds futures are still not fully pricing in a rate hike in December, those odds are around 78.1%. As such, hints that a fourth hike is inevitable this year may revive gains in the US Dollar. This also risks sending stocks and the S&P 500 lower.

Following bullish confirmation after an ascent through a falling trend line form October, the ASX 200 continued to make further upside progress. More gains could be in store for now technical speaking, but the dominant downtrend is still intact. This is defined by a descending resistance line that goes back to late August. For now, uninterrupted progress will have the ASX 200 testing 6,000 next while near-term support is around 5,795. 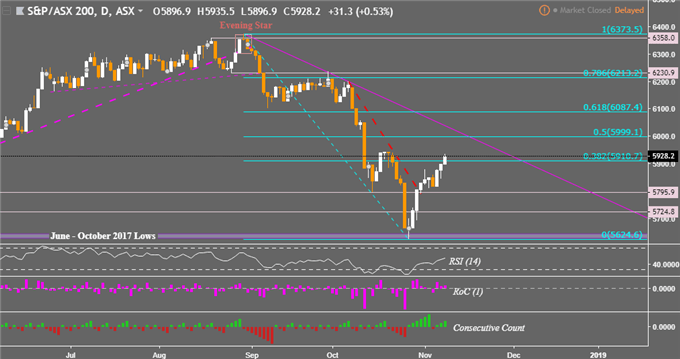