HomenewsAlertsAsia Stocks Embrace Prospects of US Avoiding Another Shutdown

Asia Stocks Embrace Prospects of US Avoiding Another Shutdown

Find out what retail traders’ equities buy and sell decisionssay about the coming price trend!

Asia Pacific equities generally traded higher following an upbeat European and mixed US trading session. The former seemed to have been because of a report from the Bank of France that its home country may not contract in the first quarter of 2019. Given how much concerns have been raised as of late about souring global growth, it would appear to make sense that nations avoiding recessions spurs risk appetite.

Meanwhile during the APAC session, reports crossed the wires that an agreement in principle has been reached in US shutdown talks. The Nikkei 225 rallied about 2.5% (after being closed Monday) in its best day since December 2018. Australia’s ASX 200 also climbed, rising 0.3% as we headed into Tuesday’s close. China’s Shanghai Composite also climbed 0.52% at the time of this writing.

Looking at currencies, the anti-risk Japanese Yen aimed cautiously lower. Meanwhile the pro-risk Australian Dollar gained. S&P 500 futures are pointing notably higher, suggesting that sentiment may continue improving over the remainder of the day. This will then be tested when BoE Governor Mark Carney and Fed Chair Jerome Powell speak later today.

The rise in the Nikkei 225, while impressive, still left it sitting right on the descending trend line from October 2018. A close above it followed by another one beyond 21,035 (outer range of now horizontal resistance) may open the door to more gains down the road. 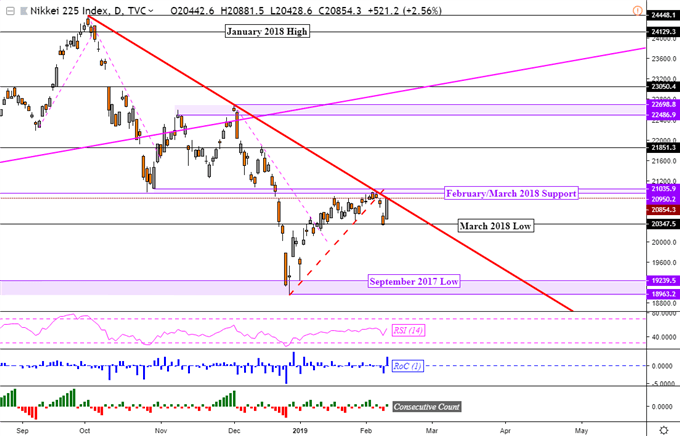