Asian stocks were up across the board Wednesday as investors looked with hope toward the Vietnam summit between US President Donald Trump and North Korea’s Kim Jong un, due to take place later in the day.

Observers don’t seem to be expecting too much from the second historic meeting between the two, but the fact that the meeting is happening at all looks to be enough for now. Wall Street’s lead was muted after Federal Reserve Chair Jerome Powell gave semi-annual testimony to the Senate. Powell was cautious in his outlook given uncertainties from trade to Brexit. He will address the House of Representatives on Wednesday.

The US Dollar was capped by Powell’s caution, with the UK Pound holding up near five-month highs on the possibility that Brexit will be delayed to avoid a disorderly ‘no deal’ departure. The New Zealand Dollar was hit early by weaker–than–expected trade numbers from its home economy.

NZD/USD remains in the daily-chart uptrend in place since mid-February but has not managed to get back into the uptrend which gave out on February 5. 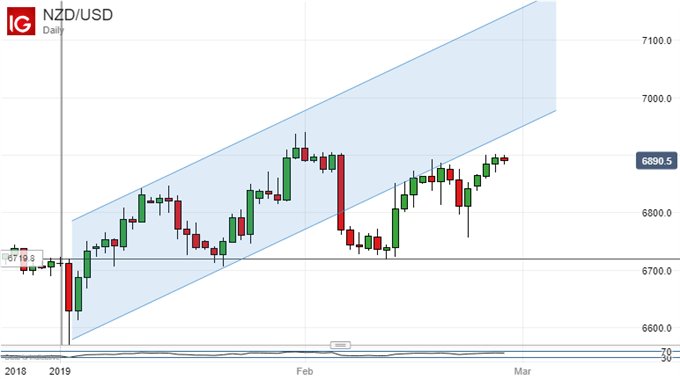 NZD bulls have not quite lost hope though, having taken their currency up to a new ‘higher high’ this week, albeit not yet with any great conviction.

Gold prices were steady through the Asian session while crude oil prices were supported by OPEC-led supply cuts and by news of falling US inventories.

The rest of the day’s data calendar holds many likely points of interest. Aside from Mr. Powell’s words investors can look forward to Canadian inflation numbers, as well as trade, durable goods and pending home sales figures from the US. Lastly, the Department of Energy will release news of crude oil inventory levels from the key delivery node at Cushing, Oklahoma.