Most Asian stocks were cautiously higher as a new week got under way Monday despite the broad backdrop remaining rather threatening.

Differences on trade between the US and China were highlighted again at the Asia Pacific Economic Cooperation summit in Papua New Guinea. US Vice President Mike Pence listed his country’s differences with China, shortly after criticizing China’s flagship Belt and Road program. China’s foreign minister responded by denying that the plan would force participating countries into a debt trap.

Away from trade, Europe’s pressing problems continue to simmer. UK Prime Minister Theresa May’s Brexit deal seems highly unlikely to pass Parliament, while Italy’s budget standoff with the European Union endures. Still, Japanese data showed exports retrace their September fall by rising a annualized 8.2%. That seemed to boost the bellwether Nikkei 225, even though it was still below the 9% rise expected.

The US Dollar was broadly lower, if not by very much, following caution over the global growth outlook expressed by Federal Reserve officials. USD/JPY has slid once again back towards its key, long-term daily-chart uptrend line. 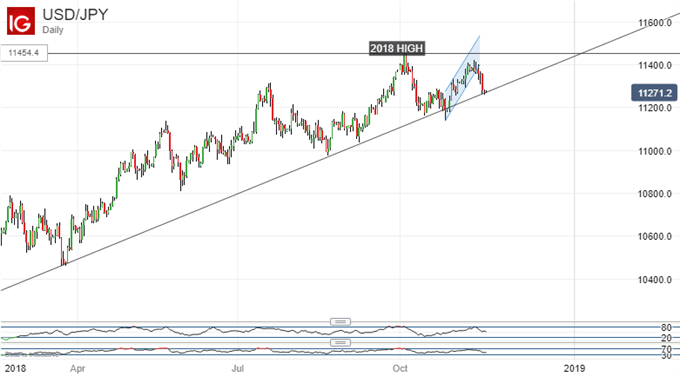 There still seem very few fundamental reasons to prefer the Yen, especially when interest-rate differentials are taken into account, but, for the moment it seems to be winning this particular ‘battle of the havens.’

Gold prices got a small lift even as the Dollar retreated while crude oil prices were supported by expectations of further production cuts.

Still to come this Monday is the housing market index from the US National Association of Home Builders.