Asia Pacific stock markets traded in mixed fashion on Friday afternoon, with some indexes staying in the green despite more very sharp Wall Street falls in the previous session.

Dow futures imply a much stronger start to the week’s final trading day, allowing investors to hope that recent slides have been merely correctional. The Nikkei 225 was down 0.3% as its close approached, with the Shanghai Composite off 0.2% following a whipsaw morning.

The US Dollar traded at two-week lows against its major-traded rivals as US Treasury yields slipped back in the wake of Wall Street’s rout. However, it did creep back again against the Japanese Yen as the Asian session went on. USD/JPY remains within an enduring, seven-month uptrend channel on its daily chart. 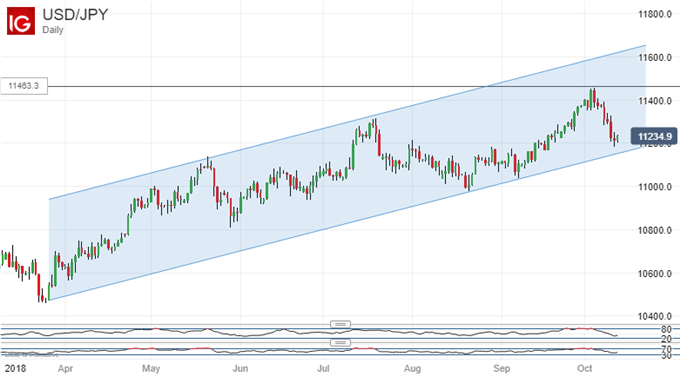 That said it is now far closer to a downside test than to the one-year highs struck earlier this month.

Gold prices were close to two month highs as weaker US stocks stoked haven demand. Meanwhile crude oil prices held up through the session but are still looking at a weekly fall of the order of around 4%. Worries about global growth prospects, and therefore crude demand, have increased in the wake of the International Monetary Fund’s forecast downgrade.

Friday’s remaining economic data schedule is a little light, with only the University of Michigan’s consumer sentiment snapshot in the front rank as a probable trading cue. German consumer price numbers are coming up, along with US export and import prices and Mexican industrial production.