Asia Pacific stock markets were broadly higher Monday, with the Shanghai Composite surging by more than 3%, as investors look with new hope to the chances of a trade settlement between the US and China.

Talks are ongoing but President Donald Trump Tweeted on Sunday that he had decided to postpone a planned tariff increase that had been penciled in for March 31, citing progress already made in negotiations. He also held out the possibility of a summit with his Chinese counterpart Xi Jinping if the two can get closer still.

In the foreign exchange space risk-sensitive currencies made initial gains on the trade news, with the New Zealand and Australian Dollars gaining at the expense of havens like the Japanese Yen. The Chinese Yuan made seven-month highs against the US Dollar which was overall steady against major traded rivals.

AUD/USD remains above 2018’s dominant downtrend channel, with risk appetite holding it up despite a complete lack of obvious interest rate support. 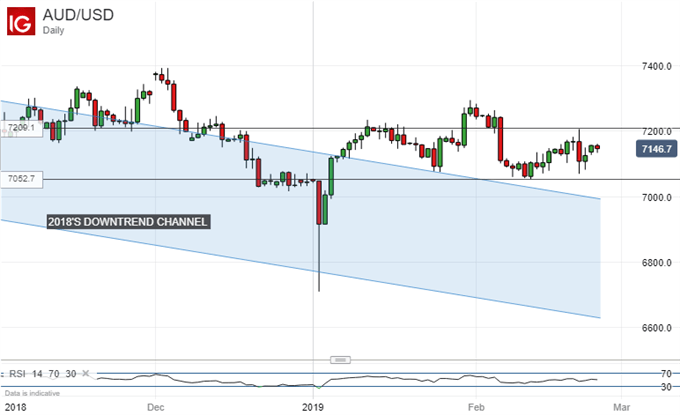 It’s a quiet Monday for economic data. Mexico’s growth numbers are coming up, as is news of US wholesale inventories.