The DailyFX Third-Quarter Fundamental and Technical Forecasts are out now,

The enduring prospect of more tit-for-tat tariffs between China and the US kept equity Asian trade nervous on Monday, with a mixed picture forming as the session drew to a close.

Wire reports at the end of last week said that Donald Trump still wanted to impose new barriers on Chinese goods, with a series of reports from The Wall Street Journal over the weekend suggesting that Beijing could skip forthcoming trade talks if he did. This was more than enough to sour the mood as a new week got under way, even with usual bellwether Tokyo out of the picture for a Japanese holiday.

The ASX 200 managed to stay in the green, bucking a trend which saw mainboards in Shanghai, Hong Kong and Seoul in the red.

The US Dollar reaped the rewards of the trade-related haven bid which seems to have become its due when tariff headlines dominate proceedings. Friday’s commitment of traders data from the Commodity Futures Trading Commission showed global markets still very Dollar bullish, with net-long positions coming it at close to $20 billion.

Indeed, the greenback seems to be doing a little better in the battle of the havens between it and the Japanese yen. USD/JPY remains in the solid uptrend which has been with us since March and has in the last week made peaks higher than those of late August. 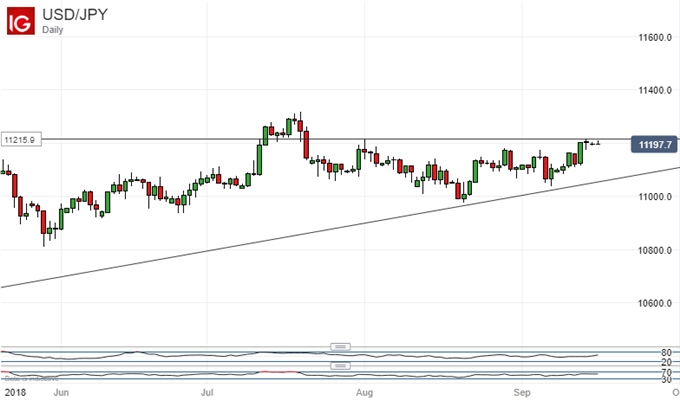 Still to come on Monday are Eurozone Consumer Price Index data and, from across the Atlantic, the Empire Manufacturing Index for September.