Asian stocks were mostly lower as a new week kicked off, with Monday’s action dominated by new worries about global trade.

Last week the US Administration said it would impose a 25% tariff on more than 800 Chinese goods, with Beijing respoinding in kind. Although the total possible increase is not large in the scheme of overall US/China dealings, renewed tensions on the subject did risk appetite no good.

The session’s actual trade data, which came from Japan, was quite strong. Exports surged at their highest annualized pace for four months in May, official numbers showed, but the overall trade gap yawned more widely than expected thanks to a sharper import rise.

Still, that was nowhere near enough to pull stock markets out of the doldrums. The Nikkei 225 was down 0.9% in the Tokyo afternoon. Most other bourses were in the red too, with the exception of the ASX 200 which managed to stay up thanks to strength in the banking sector.

The US Dollar remained close to seven-month peaks against its major traded rivals, with prognoses for more interest rate hikes keeping support firm. EUR/USD remained under pressure although the lows of late May seem to be providing quite solid support. 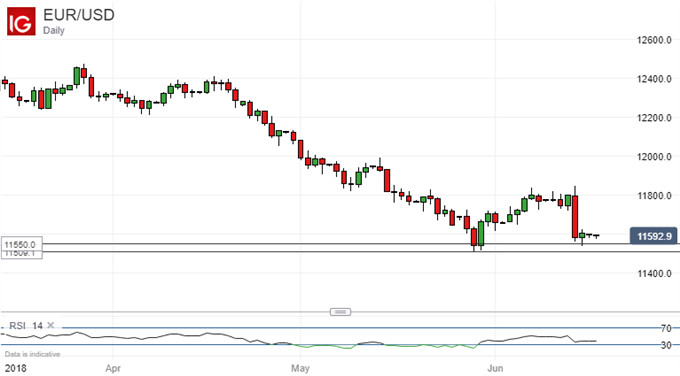 Trade fears were modestly good for gold, which inched up by 0.3% or so through the Asian session.

There’s not much left on Monday’s data schedule, with only the US house price index from the National Association of Home Builders likely to attract much market attention.