Asian stocks slipped on Friday, with investors once again worried about prospects of a trade settlement between China and the US.

Financial news channel CNBC reported Thursday an unnamed source as suggesting a meeting between President Donald Trump and his Chinese counterpart Xi Jinping was ‘highly unlikely,’ at least before the expiry of a key March deadline for talks. President Trump later confirmed that he would not be meeting Xi prior to this.

The two countries have until the end of next month to strike a deal if more tariffs on Chinese imports to the US are not to take effect.

Sure enough the Nikkei 225 had shed 2% by the middle of the Tokyo afternoon. The Hang Seng lost 0.4% and the ASX was down by 0.5%. Markets in China remained closed for the long Lunar New Year break.

There was foreign exchange action for the Australian Dollar too. That currency had already been battered this week when the Reserve Bank of Australia changed its message. Having insisted for some time that the next intertest-rate move was likely to be a rise, the central bank said that the prognosis was now more balance and conceded that cuts could come if the economy weakens.

On Friday it added to Aussie bulls’ woes by making aggressive cuts to its forecast assumptions for growth and inflation.

AUD/USD’s perky start to the year has come crashing down, with the pair now close to support at the top of its dominant 2018 daily-chart downtrend. 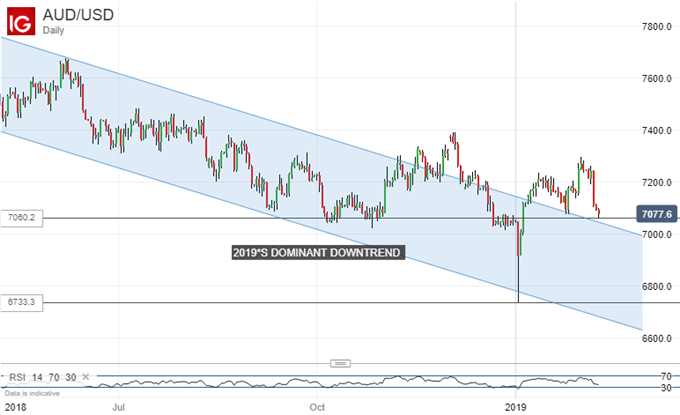 The US Dollar was broadly underpinned as those trade worries encouraged investors to seek haven assets.

Worries about a deepening global slowdown reportedly weighed on oil markets, although production cuts from traditional producing countries will probably restrict losses. Gold prices got an additional lift but inched lower through the Asian session.

Friday’s economic data schedule is lightly loaded but there are some likely points of investor interest. Canada’s unemployment figures are due as are German trade numbers. The latter may be eyed unusually closely by international investors given the weakness of other recent numbers out of Europe’s engine room.