Build confidence in your own trading strategy with the help of our free guide!

The New Zealand Dollar pared some of its gains following a better-than-expected local inflation report during Tuesday’s Asia Pacific trading session. Interestingly, the RBNZ’s gauge of core inflation remained unchanged following the headline data, but that didn’t seem to be the reason why it lost some upside momentum later on.

While most APAC benchmark stock indexes traded cautiously higher (China’s Shanghai Composite was down 0.15%), some of those gains were pared later on. The Nikkei 225’s climb was somewhat reduced to only +0.21% and S&P 500 futures fared a similar fate. Australia’s ASX 200 fared better though with gains holding around +0.56 percent heading into Tuesday’s close.

The rather cautious upbeat mood in the markets was matched with a climb in US government bond yields towards the latter half of the maturity spectrum. Not surprisingly, this was accompanied by a partial recovery in the US Dollarwhich might have robbed NZD from some of its gains. Anti-risk currencies such as the Japanese Yen and Swiss Franc traded lower.

Over the remainder of the day, stocks and FX will look to geopolitical developments for their next move. We will get a speech from Italy’s Prime Minister Giuseppe Conte ahead of the EU leaders summit. EU Chief Negotiator Michel Barnier is to present Brexit summit conclusions. Looking more outward, there is a risk for emerging markets and equities if Chinese economic growth continues slowing.

The ASX 200, while seeing a small recovery on Tuesday, is still in an aggressive downtrend that followed a formation of an evening star bearish reversal pattern back in late August. Since then, the index has retraced around 77 percent of gains seen from the April 2018 low to the August 2018 high. 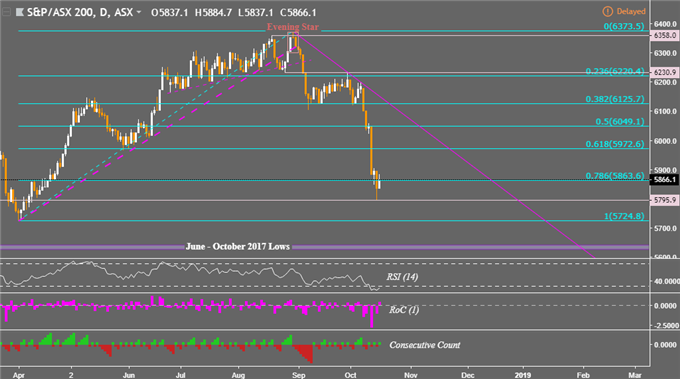 What Else to Expect Ahead?