The first day of June kicked off with broad-based U.S. dollar weakness. The traded lower against all of the major currencies as equities moved higher. Americans are growing increasingly nervous about the protests in U.S. cities, but investors have been unfazed. We can’t see this optimism lasting as it is almost certain that the protests will impact investor confidence. Historically the economic impact of protests and riots tend to be short-lived, but rising virus cases could be a dangerous consequence. The protests are important but the number of protestors screaming without masks poses a major risk to the progress being made. If COVID-19 cases spike in New York City, the proposed June 8 phase-one reopening could be pushed back. With that said, the rally in equities can be attributed to the market’s relief that the Trump administration’s response to China’s new national security law in Hong Kong was relatively tepid.
However, reports that China has asked state firms to halt some purchases of U.S. soybeans and pork could trigger further threats of retaliation from Trump. U.S. data was also weaker than expected with the rising to only 32.1 against a 35 forecast.
The best performing currency today was the , which rose approximately 1% ahead of the Reserve Bank of Australia’s monetary policy announcement this evening. When the RBA met in May, the Australian dollar rallied despite the central bank’s commitment to doing what is necessary to support jobs, incomes and businesses, including scaling up bond purchases. In its quarterly statement on monetary policy, it said it expect the economy to contract 6% this year and the jobless rate to soar to 9% as many jobs lost become permanent. Yet, the economy is in the process of reopening and the data since the last meeting shows the widespread improvements (see table below). jumped 8.5% in the month of March with stronger recovery expected in April. Last night’s manufacturing PMI index also ticked up to 41.6 from 35.8. Major job losses were reported in April but the unemployment rate rose less than expected and both consumers and businesses feel less pessimistic. China, Australia’s largest trading partner, also saw broad-based improvements in April.

There’s no question that the Australian government has done a great job putting COVID-19 behind it. The biggest problem for Australia are trade relations. China’s troubles with the U.S. and Australia’s troubles with China presents new problems for the Australian economy. The Chinese government confirmed that barley tariffs are related to its trade investigations and its press for investigation into coronavirus origins. It will be interesting to see how the RBA views these concerns. If they are downplayed and the RBA focuses on the bright spots, AUD/USD will extend to fresh three-month highs, but if it expresses new concerns, it will put a halt to the pair’s impressive recovery.

The and dollars also traded higher. According to Markit Economics, manufacturing activity in Canada improved in the month of May. New Zealand building permits and terms of trade data are due for release this evening. With the trade balance turning positive in February and rising strongly in March, we could see improvements all around.
Downward revisions to Eurozone PMIs failed to put a halt to ’s rally. Final manufacturing PMI numbers for Germany were revised down to 36.6 from 36.8, while numbers for Eurozone was lowered to 39.4 from 39.5. The European Central Bank is widely expected to increase its Pandemic Emergency Purchase Program and release grim economic projections this week, which will make it difficult for the euro to extend its gains. traded higher after a small upward revision to UK manufacturing PMI. The government is also expected to announce more monetary stimulus this month and fiscal stimulus next month. 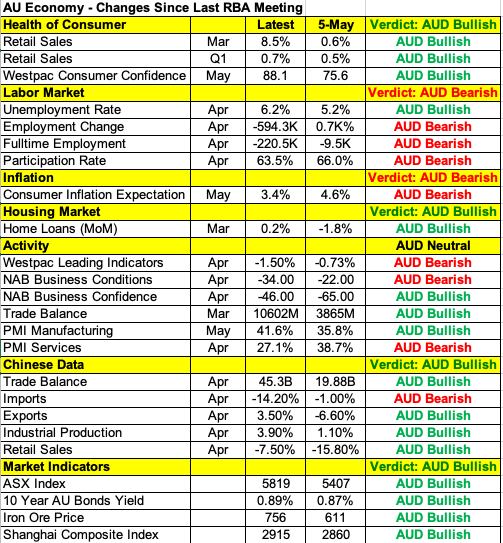