The Australian Dollar rallied against its major peers after now soon-to-be former Prime Minister Malcolm Turnbull was ousted and is to be replaced by Scott Morrison. This development crossed the wires after Mr. Turnbull slowly lost his grip on government over the past couple of days. Members of his own cabinet resigning yesterday weighed on both AUD/USD and the ASX 200.

Now, with some of that political uncertainty removed, the Australian Dollar and the country’s benchmark stock index found themselves appreciating. Mr. Morrison ended up winning the Liberal party room vote by 45 to 40 over the right-wing Peter Dutton. The former was seen as more of the status quo while the latter might have offered more dramatic changes.

Not only did the Aussie and ASX 200 increase, but Australian front-end government bond yields also rose. Though the RBA remains patient before acting on raising rates in the near-term. Ahead, the markets will be eyeing a speech from Fed Chair Jerome Powell at the Jackson Hole Central Banking Symposium. The US Dollar could rise if Mr. Powell increases hawkish policy expectations. This may also bode ill for stocks and thus AUD. 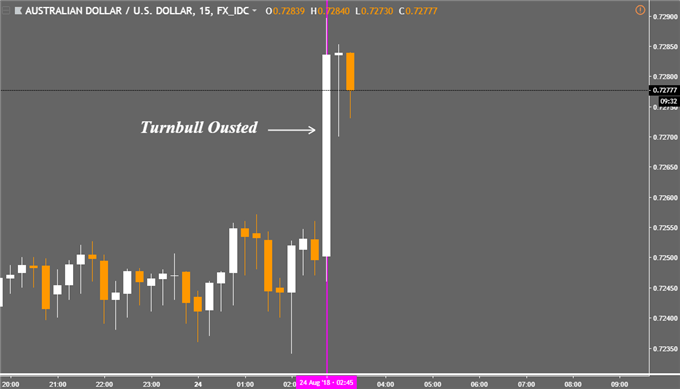 On a daily chart, the reduction in Australian political uncertainty caused a spike in AUD/USD to the upside. However, at the time of this writing the pair still remains shy of paring its loses from yesterday’s trading session. In the event Aussie Dollar finds itself resuming the dominant downtrend since February as the week comes to an end, the pair could get stuck on the current 2018 low at 0.72026. On the other hand, resistance is the August 21st high at 0.73818. 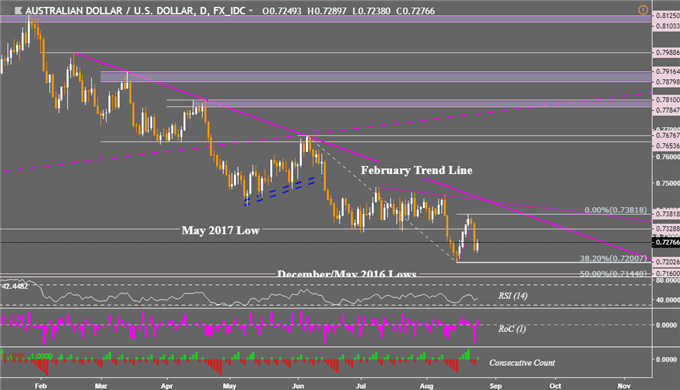