AUD/USD holds a narrow range even as commercial banks in Australia start to raise interest rates, with the exchange rate at risk for further losses as the Reserve Bank of Australia (RBA) remains in no rush to lift the official cash rate (OCR) off of the record-low.

Commonwealth Bank of Australia along with Australia and New Zealand Banking Group have now joined Westpac Banking Corp. in raising mortgage rates to combat higher funding costs, but recent comments from the RBA suggest the central bank will continue to sit on the sidelines as ‘the average mortgage rate paid is lower than a year ago.’

Even though the RBA’s ‘central forecast is for growth of the Australian economy to average a bit above 3 per cent in 2018 and 2019,’ it sees as though Governor Philip Lowe & Co. will retain the current policy throughout the remainder of the year as ‘household income has been growing slowly and debt levels are high.’

It seems as though the RBA will continue to tame expectations for a rate-hike at the next meeting on October 2 as ‘once-off declines in some administered prices in the September quarter are expected to result in headline inflation in 2018 being a little lower,’ and the Australian dollar stands at risk of facing headwinds over the near-term as the central bank warns ‘high debt levels could complicate future monetary policy decisions by making the economy less resilient to shocks.’

In turn, the broader outlook for AUD/USD remains tilted to the downside as both price and the Relative Strength Index (RSI) continue to track the bearish trends from earlier this year, with the September opening range still in focus as the exchange rate holds a narrow range. Sign up and join DailyFX Currency Analyst David Song LIVE for an opportunity to discuss potential trade setups. 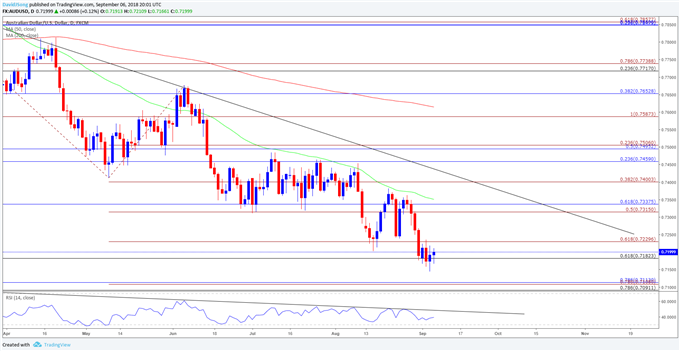