HomenewsNewsAUD/USD May Fall With Asia Stocks After Wall Street Volatility

AUD/USD May Fall With Asia Stocks After Wall Street Volatility

The British Pound and New Zealand Dollar were some of the best performing majors on Wednesday. Sterling continued rallying amid ebbing ‘No-Deal’ Brexit bets despite UK Prime Minister Theresa May leaving the door open to one. Meanwhile, the Kiwi Dollar enjoyed fading expectations of an RBNZ rate cut this year after a better-than-expected local inflation report.

For pro-risk currencies such as the Australian Dollar, the US trading session offered little fuel to extend their gains. White House Economic Adviser Kevin Hassett spoke and warned the continuation of the government shutdown could result in near-zero growth. After gapping higher, the S&P 500 traded lower as domestic government bonds rallied. After a slight rally later, the index closed +0.22%.

This signaled a flight-to-safety as risk capital flowed into haven assets. The US Dollar, which tends to benefit in this scenario, failed to capitalize on gains and ended the day cautiously lower. Falling yields alongside a fading Fed rate hike bets may have been a more prominent influence. Meanwhile the anti-risk Japanese Yen still ended the day lower, perhaps due to the Bank of Japan lowering inflation expectations.

Earlier in the day, US President Donald Trump warned China that tariffs could increase should a trade deal not be reached. As the markets then transitioned into Thursday’s session, the White House requested data on if the shutdown prolongs into March. This showed that it may continue for the time being. As such, these developments may adversely impact Asia Pacific benchmark stock indexes as markets turn risk-averse.

This could boost the Japanese Yen at the expense of the sentiment-linked Australian and New Zealand Dollars. Australia’s December jobs report will also cross the wires. Data out of the country has been tending to underperform relative to economists’ expectations as of late. Such an outcome could increase expectations of an RBA rate cut as AUD/USD falls. Overnight index swaps are pricing in a 34% chance of a cut later this year.

The continuation pattern outlined in my weekly Australian Dollar forecast appears to have been broken on the AUD/USD chart below. Typically, a “Pennant” is a continuation pattern. The descent under it may open the door to losses instead. Near-term support is at 0.70211 with resistance around 0.71645.

Each week I conduct a poll to see which Aussie crosses to cover in the technical forecast. You can participate in the poll by following me on twitter @ddubrovskyFX as well as to see timely updates on the Aussie Dollar. 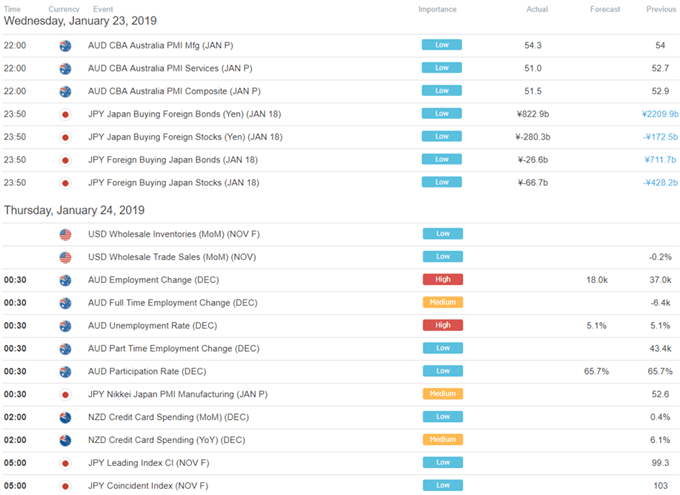