AUD: The Aussie outperforms following a shock election outcome, in which Prime Minister Scott Morrison secured re-election (full story). In reaction, the Aussie gapped higher at the Asia open, reclaiming the 0.69 handle against the greenback. However, as equity markets have headed lower throughout the European morning, risks are for gains to be faded. Alongside this, key headwinds in the form of trade war tensions and a potential RBA June rate cut are likely to limit upside. Reminder, RBA Governor Lowe due to speak tonight after RBA meeting minutes (calendar)

Crude Oil: Oil prices surged at the Asia open as Saudi Arabia signalled that cuts could be extended throughout the remainder of 2019 at the JMMC meeting, while President Trump had also stepped up his critical rhetoric towards Iran. Although, with equity prices beginning to push lower, oil prices have pared the majority of its initial gains.

Equities: US equity futures have headed lower amid the continued crackdown by the US on China’s Huawei, which in turn has chipmakers come under pressure, while Google also stated that they are to restrict the company’s use on android services. Elsewhere, Apple’s price target had been cut by HSBC to $174 (median street price target = $220), citing concerns over China, while tariff led price increases on Apple products could also have dire consequences on demand. Apple shares currently lower by 2.4% in pre-market. 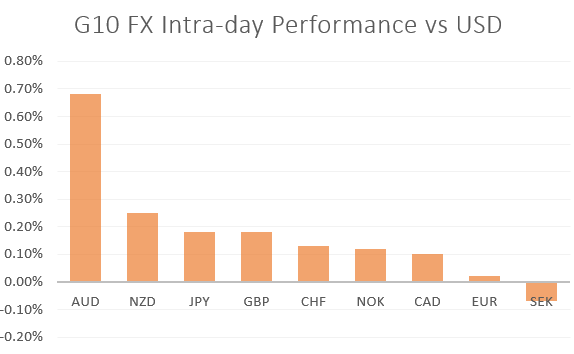