The first week of August was a fairly good one for the US dollar.

The appreciated against all of the major currencies with the exception of the , and dollars. was the worst performer while the loonie enjoyed broad-based gains. The Australian and dollars bounced off 2-week lows while fell to a 5-week low. It was a very eventful week that included a rate hike and a modest calibration of monetary policy by the . The monetary policy decision and report were overshadowed by trade tariffs, weakness and action. In terms of data releases, the next few weeks of August will be quieter but with many traders taking off for summer holidays, low liquidity could also lead to big moves in currencies.

Last year, dropped more than 4% in the month of August. Although the move in was not as severe, the pair still fell 500 pips from high to low. In contrast, EUR/USD experienced a nearly 300 pip rally from its mid-month low as it broke above 1.20 for the first time in 2.5 years. This divergence drove to its strongest level in nearly 8 years. didn’t move much but USD/JPY hit a 4-month low. In 2015, China rocked the markets in the month August by unexpectedly devaluing its currency. If you take a look at the charts, August 2016 wasn’t a sleepy month for currencies either. So, while the economic calendar is lighter in the weeks ahead, we can’t be complacent especially in an environment of elevated trade and Brexit risks. 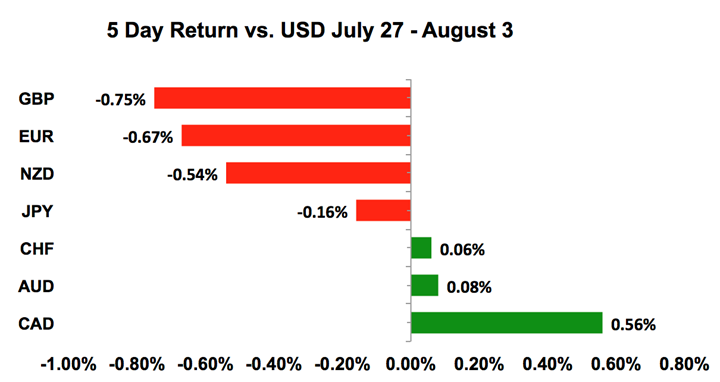 This month’s Federal Reserve’s and US report failed to help the dollar even though both event risks were specifically negative for the greenback. Starting with the Fed, there were no surprises in the . The central bank described the economic activity as strong and affirmed the need for gradual rate increases. While some economists argued that there was a mild dovish shift in the language, with the Fed using the word ‘strong’ instead of ‘solid’ to describe US growth, the change does not cast doubt on September tightening. The same is true of the jobs report. While jobs growth slowed significantly in the month of July (from 248K to 157K), the June data was revised up. The declined and grew at a faster pace. Unfortunately, on a day when was already weak, the data miss gave traders another reason to sell. This week’s inflation report isn’t expected to help the greenback as the stronger data and lower gas prices puts pressure on .

The Bank of Japan’s was also a big disappointment. Interest rates were left unchanged and while they would allow long-term yields to “move upward and downward depending on economic and price developments,” the BoJ intends to keep rates near zero. They also lowered their inflation forecast and pledged to keep extraordinary policies in place for an “extended period of time,” widening the gap between Fed, BoE and policies. These actions tell us that fighting inflation and boosting growth is more important to the central bank than boosting commercial bank profitability. The announcement sent the yen tumbling but the move was short-lived because hit 18-month highs, forcing the BoJ to step into the market to buy to 10-year bonds to drive yields lower. In the near term, anyone trading USD/JPY should keep an eye on JGB yields.

However, there may be no bigger driver of currency flows than US-Chinese trade tensions. Last week, the US government proposed $200bn in fresh tariffs on Chinese goods. China responded with $60bn in retaliatory tariffs. They’ve also been manipulating the Yuan. For the past 3 months, they allowed the to weaken significantly to help exporters but on Friday, they boosted the reserve requirement on foreign currency forwards from 0 to 20% in an attempt to curb Yuan weakness. The war is far from over and any positive or negative headline could have a significant impact on the dollar and currencies this month.

Instead of rising, broke down after the Bank of England raised interest rates for the first time in 2018. This move may be confusing but the BoE has no intention of tightening again this year and could even loosen monetary policy if Brexit causes market disruptions. Data hasn’t been great with manufacturing and service sector activity slowing in July and consumer confidence falling. However, inflation is well above the central bank’s 2% target so the BoE felt compelled to act. Governor wasn’t particularly concerned about the economy but he felt that “one hike a year isn’t a bad rule of thumb.” Sterling has been under pressure for the past few months as Prime Minister May struggles to reach a Brexit agreement with the European Union. Investors share Carney’s concern that negotiations are entering a “critical period” and the “chance of a no deal Brexit is uncomfortably high.” He felt that “some scenarios may require a rate cut.” All this talk of possible easing in a tightening cycle makes investors nervous so unless there’s progress on Brexit negotiations or data takes a turn for the better, we will see GBP/USD at fresh 1-year lows. Second quarter GDP, trade balance and industrial production numbers are scheduled for release on Friday.

For the first time in more than a month, EUR/USD closed below 1.16. The sell-off in the euro last week was mainly a function of strength as Eurozone fundamentals took back seat to bigger stories. Data from the Eurozone was mostly weaker with stronger inflation offset by falling confidence, weakening growth and slower gains in retail sales. Germany’s trade balance is the only important report on next week’s calendar. Technically the pair is vulnerable to additional losses after having ended the week at a 1 month low. We expect EUR/USD to test 1.15 and we are watching for a possible move down to 128.

Our focus shifts to the commodity currencies this week with monetary policy meetings for and . AUD and NZD dropped to 2-week lows on the back of mixed data and US dollar strength. This week, further losses will require dovishness from the Reserve Banks. Both the RBA and RBNZ are expected to leave monetary policy unchanged but their outlooks could be vastly different. The RBNZ has many reasons to be cautious while the RBA could find cause for optimism. When Australia’s central bank last met, they talked about progress in the labor market and pickup in inflation. Since then, we’ve seen even stronger job growth and a rise in consumer confidence. Inflationary pressures eased slightly but still remain strong on a quarterly and annualized basis. The bad news is that the weakness in trade and manufacturing activity most likely worsened over the past month with the Chinese Yuan falling to a 6-month low against the Australian dollar. US-China trade tensions pose a serious risk to Australia and New Zealand’s economy that cannot be ignored. So far, the RBA has refrained from commenting on slower growth in China and trade wars. If that’s case this time as well, AUD/USD will rise on RBA. However, if external risks make their way into the RBA statement or Governor Lowe’s comments, AUD/USD will fall to fresh 1-year lows. Chinese trade numbers are also scheduled for release and could have a significant impact on AUD and NZD. 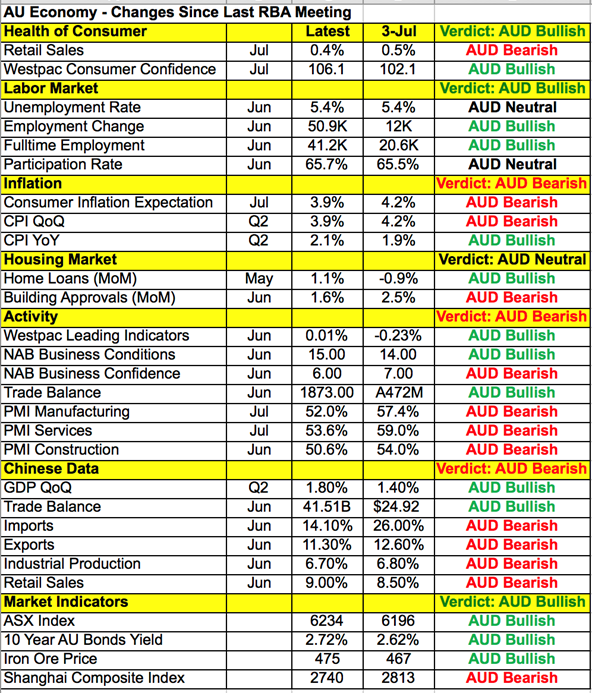 The Reserve Bank of New Zealand, on the other hand, will keep the door open for future easing. When they last met in June, they left interest rates unchanged and said they are well positioned to manage a rate change in either direction. They also tweaked the wording of the statement slightly to suggest that they could change interest rates and the fact that NZDUSD dropped to a 2 year low following the announcement reflects the fear that the next move could be a rate cut. Unfortunately, New Zealand’s economy only worsened since then. Card spending is up but consumer and business confidence declined. Service and manufacturing sector growth slowed significantly while the trade surplus turned to a deficit. Inflation increased but dairy prices are down. The only saving grace is the weakness of the New Zealand dollar. It helps to make NZD dairy more attractive on the global market and more affordable to Chinese importers who are grappling with Yuan weakness. With that in mind, the RBNZ has very little reason to be optimistic. Having just tweaked the language in their monetary policy statement at their last meeting, they still want the market to believe that a return to easing is possible. For this reason, we expect NZD to underperform in the week ahead, particularly against AUD. 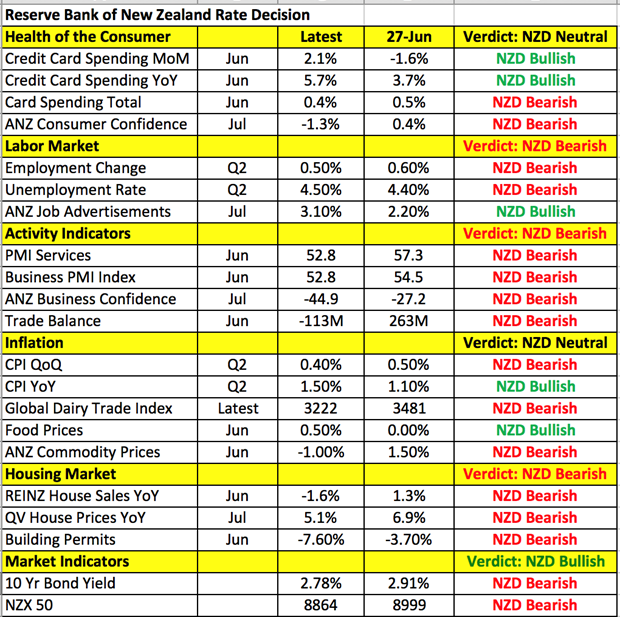 The is performing well because investors believe that the Bank of Canada will raise before the end of the year. Over the past few weeks, we have seen a series of stronger economic reports ranging from , to and trade. Canada’s economy expanded by 0.5% in May up from 0.1% the previous month. Most remarkably, the country’s trade deficit shrank to 626 million, which is a significant improvement from the prior deficit of -2.77B. Despite the US’ tariffs on steel and aluminium, exports hit a record high thanks to robust demand for energy and aircraft sales. As a result, the market is pricing in a 77% chance of a rate hike in December. has broken below 1.30 and we expect the pair to extend its losses in the coming weeks if data continues to surprise to the upside. and numbers are due for release this week, encouraging further volatility in the loonie.