Just getting started trading the Australian Dollar? See our beginners’ guide for FX traders to learn how you can apply this in your strategy!

The Australian Dollar took a slight hit when lower local consumer inflation expectations crossed the wires, but AUD/USD still has the potential to put in a major reversal. Australian price growth expectations fell to 3.6% in April from 3.7% in March. This consensus is well above the RBA’s inflation target as is and probably won’t offer much to the table. Half an hour later, local home loans declined by slower-than-expected at -0.2% m/m in February versus -0.4%. There, the Aussie got a slight boost.

The decline in the Australian Dollar after the first piece of data was accompanied with the Nikkei 225 pushing higher as sentiment improved. However, the higher-yielding US Dollar seemed to be getting most of the attention as it was climbing as the Aussie fell. Perhaps the markets being more interested in the latter was what caused the Australian Dollar to depreciate.

Keep in mind that the Reserve Bank of Australia does expect the next policy adjustment to be a rate hike. However, the central bank has showed us time and time again that they are in no rush to raise rates at the moment. Just yesterday, RBA’s Governor Philip Lowe reiterated that there is “no strong case for a near-term policy adjustment”. Thus, the focus for the Australian Dollar in the near-term is arguably going to be how sentiment continues behaving to rising geopolitical risks amidst recent Syria conflict tensions.

With that in mind, the Australian Dollar will probably be left vulnerable to external factors. On Thursday, Trump will have a meeting with members about the impact of Chinese reciprocal tariffs on the agricultural sector. US agricultural exports to China have risen sharply over the past few years. Signs that Trump may soften his tariff stance may boost the Aussie if stocks rally and vice versa. 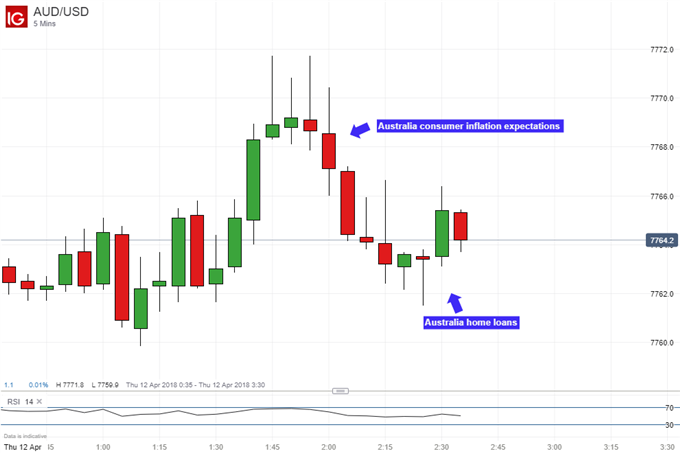 On a daily chart, AUD/USD is stuck on the resistance line of a falling wedge bullish reversal pattern. If the pair manages to push higher, a more lasting push to the upside could be in the cards. However, confirmation will be needed.

From here, the next target for resistance is the 50% midpoint of the Fibonacci retracement at 0.7818. A push higher exposes the 38.2% level at 0.7893. On the other hand, near-term support is the 61.8% retracement at 0.7743. A break below that places a descending line in sight (red line on chart below) which could be former resistance new support. 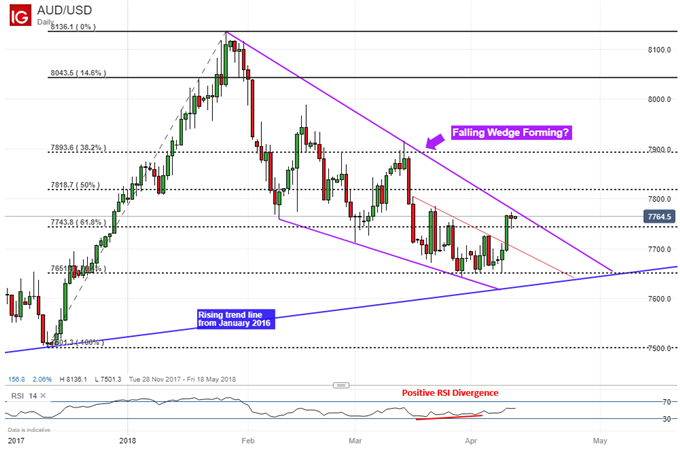