Trade all the major global economic data live and interactive at the DailyFX Webinars. We’d love for you to join!

The Australian Dollar fell as Australia’s third-quarter GDP data crossed the wires. The year-on-year growth rate slowed to 2.8% versus 3.3% expected. The currency fell alongside local 2-year bond yields, hinting that traders to read the outcome to mean that an RBA rate hike might come later than previously expected. The next increase is priced in to come no sooner than in December 2019.

The Australian Dollar’s fall following the GDP report is part of a broader downtrend path the Aussie has been running on since the beginning of the year. Despite the boon granted to the cycle-sensitive asset during after the weekend’s G20 summit – where trade tensions between the US and China seemingly dialed down – the global outlook for growth remains uncertain amid doubts that Beijing and Washington are truly prepared permanently end the trade war.

Australian Dollar Down After GDP Data Crossed the Wires 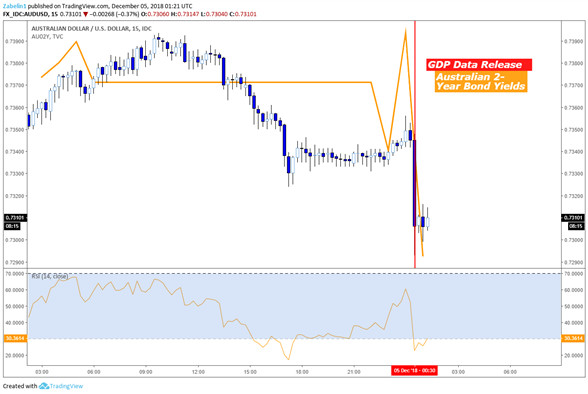 Looking ahead, the Australian Dollar is likely to continue its downtrend as the sentiment-linked asset closely watches broader risk trends. The gloomy outlook for growth will likely continue to eat away at risk appetite and undermine the desire to hold a risk-loving asset.