See how retail traders are positioning in the AUD/USD intraday using the DailyFX speculative positioning data on the sentiment page, and see what it means for future price action.

The Australian Dollar largely ignored a worse-than-expected update from the Chinese consumer price index, which grew 2.1 percent in March versus 2.6 percent estimated. Producer prices also increased less-than-expected at 3.1 percent compared to 3.3 percent. Both measures of inflation saw weaker growth relative to their prior months. Consumer prices in February had surprised markets to the upside, increasing by the most since December 2013. In March however, inflation saw more modest growth. Producer price growth on the other hand has been declining steadily since October 2017.

The Australian Dollar and local bond yields showed a relatively restrained response, as markets might have been more focused on geopolitical risks and continued flow of information on brewing trade tensions between the US and China. The most recent development in the economic altercation being China’s decision to file a complaint with the WTO against the United States steel and aluminum tariffs. Although the markets were quite pleased when Xi Jinping pushed for free trade and Donald Trump responded positively to his speech.

Significant event risk relevant to the Australian Dollar for the week ahead includes PBOC’s Governor Yi speech at an IMF conference tomorrow at 00:45 GMT. Then, keep an eye out for the Chinese trade balance which is set to be released on Friday at an unspecified time. 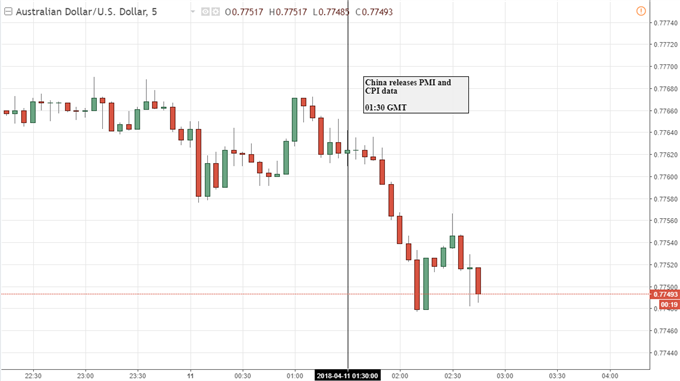