See how retail traders are positioned in the Australian Dollar, AUDUSD, AUDJPY along with other key FX pairs, indices and oil on the DailyFX Sentiment page.

The Australian Dollar continued to flounder at its lowest general level in over a decade through this past week – not surprising given the tepid state of carry trade appetite and the persistent pressure through the US-China trade war. When paired with the US currency, the Aussie’s performance was such that the market would slip even lower to secure fresh decade lows, which makes for some difficulty in establishing meaningful levels of subsequent support. While there are many different types of technical analysis employed by traders, there is relatively little practice in projecting key levels where historical precedence is difficult to register. That translates into difficulty with mounting paced reversals when they would occur seemingly ‘in the middle of nowhere’. It can also throttle the ambitions of those alternatively looking to take advantage of the prevailing trend – in other words, it can throttle momentum despite a lack of barrier.

Looking at the benchmark AUDUSD on the daily time frame (below) we can see that the seasonal norm of a quiet August has registered the same degree of reticence we have come to expect from risk-sensitive assets during this period of the year. Through this past week, there was some additional pressure to arise behind the bearish side. The slide pushed us to the lowest close on a weekly basis since March 2009. On the daily chart, however, we are still comfortably within the wedge formed throughout the month. This should stage a good short-term breakout (a non-directional term mind you) when volatility is expected to return with the month of September. 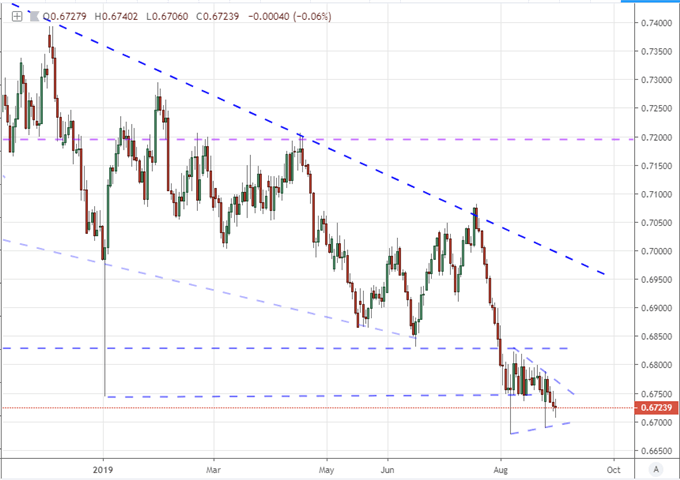 Though we have seen a considerable shift towards consolidation this past week, it is important to appreciate where the market stands on a higher time frame – which volatility will force upon us if/when it returns. The plunge through July tells us immediately that the recent quiet is not exactly systemic. The trend over the past year has been persistent with its bearish lean and we are still in some phase of acceleration. The disparity between spot and the 200-day moving average is around as extreme as it has been since the final month of 2018. In ‘normal’ or ‘mean reverting’ markets, this could act an amplifier should the Australian Dollar bounce; but it is rarely an impetus of its own. 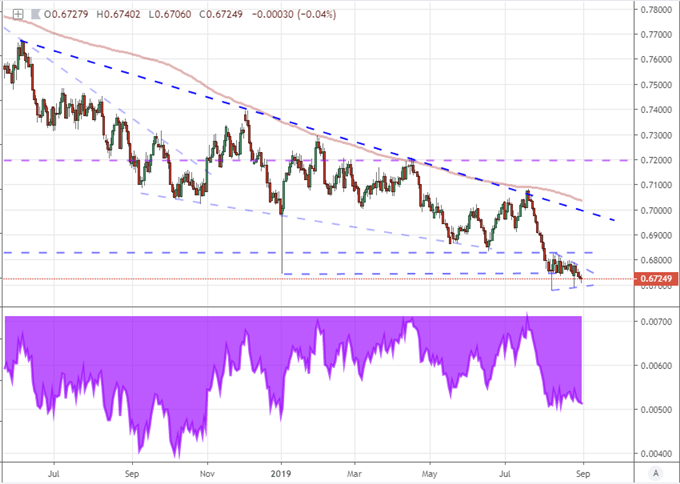 Moving the scale much higher, we start to see some of the relevant levels to our current bearings far back on the chart. The monthly chart shows we have to go all the way bac to March 2009 before we see comparable levels to work with as a guide to general zones of trading range. And even then, the relevant activity back then through a six-month period was extremely volatile and covered a 1,200 pip range. Not exactly apples to apples with our current condition; and thereby, I would not put much emphasis on the sanctity of any historical boundaries as current milestones. 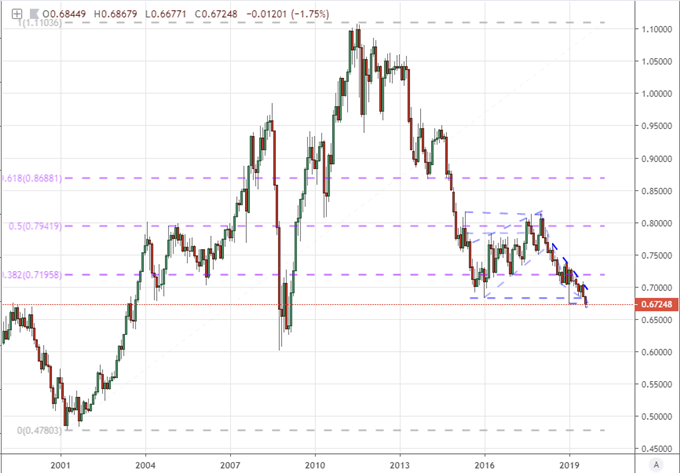 When looking at the AUDUSD, there is a considerable amount of influence attributed to that pair through the US Dollar’s own sway. Removing the Greenback from the equation – or really, significantly lessening its reference – we can find that an equally-weighted measure of the Australian Dollar major crosses (below) leaves us with a very similar picture. And yet, it is not the same in a few critical ways. This past week’s slide from the AUDUSD is not shown here and that suggests that the potential for break is more balanced than the benchmark pair may imply. The August intraday lows still abide this measures January flash crash low which suggests the broader market is likely affording some measure of support is still in play. Importantly, there is also a build-up of pressure for any sign of volatility that may return with September. In the chart below, I included a directional volatility indicator that combines a 20-day ATR with a 20-day historical range. The higher the reading, the greater the breakout pressure to forge a new trend. 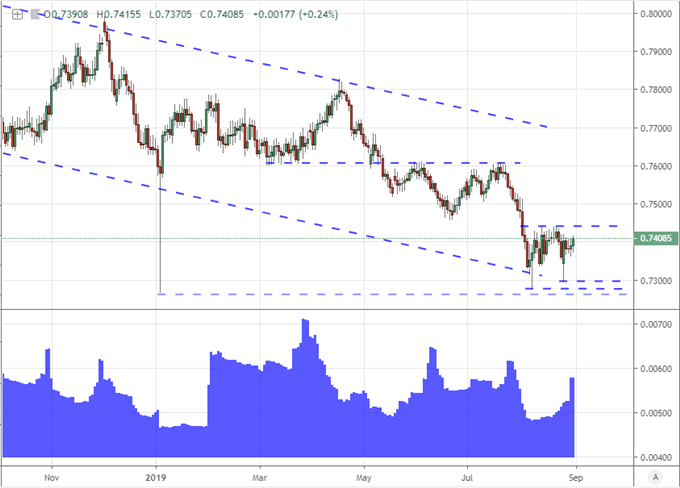 Though this is a technical report, I think it is important to include a visual representation of key fundamental themes to watch for ‘impetus’ moving forward. Volatility as a reflection of ‘risk’ is one such consideration, but it seems the trade war influence is still better targeted to the performance of AUDUSD in particular. As such, I overlaid the inverse of the Dollar-Yuan (CNHUSD) exchange rate which aligns nicely. What’s more, with the PBOC allowing the Yuan to continue to progress beyond the 7.0000-mark, the pressure can return with a tweet.

Chart of AUDUSD with CNHUSD in Green (Daily) 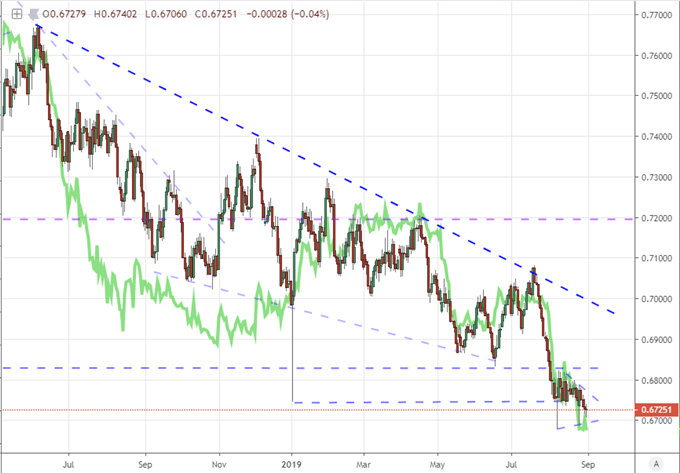 The prevailing direction in the Australian Dollar overall favors a bearish view for the currency moving forward. If indeed we extend this drive, there are numerous pairs that an exploit this trend, but an already stretched AUDUSD would not be my preferred vehicle. A rebound on the other hand could be better placed via this cross as it has so much pent up pressure – same with AUDJPY. Yet, to see a renewed and directed Aussie currency drop, I will look to a pair like AUDNZD. The Kiwi has suffered a slide of its own which has put the AUDNZD at the midpoint of its past year’s range just shy of 1.0700. 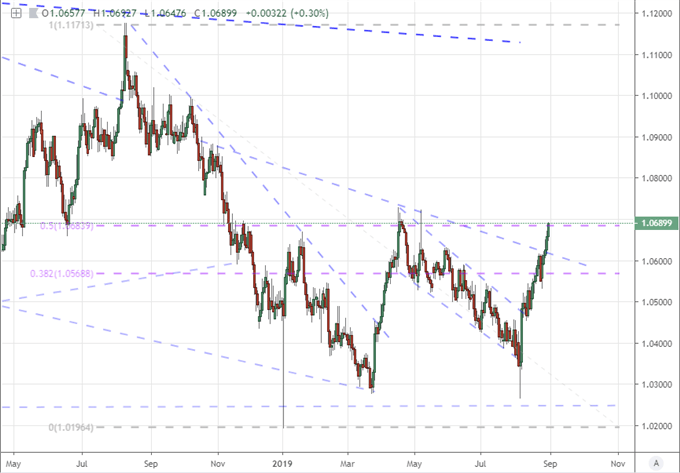 Another Australian Dollar cross that is off its absolute low, but which is probably better suited to a genuine rebound – with some moderate progress and operable technical bounds – is EURAUD. The 1.6300 level has proven August support and recent volatility suggests there is perhaps greater break pressure here than most other pairs for which it will take time to warm the engines to a significant technical move. 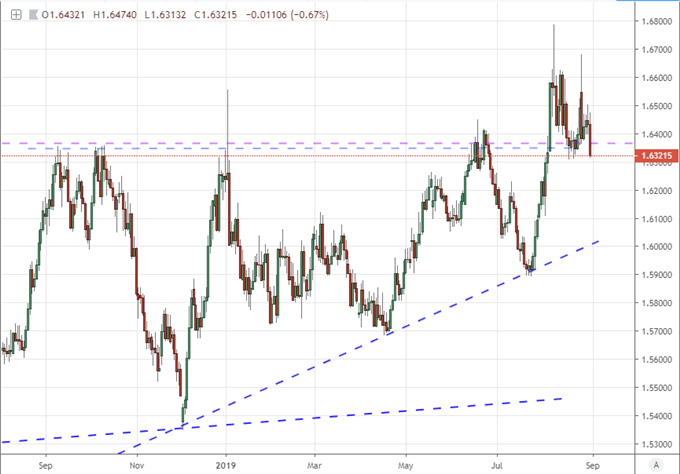 As for speculative positioning, we see an alignment of the ‘professionals’ with a longer time frame and the more timely pace of the retail crowd. Both are fighting the slide lately. From the CFTC’s Commitment of Traders (COT) reading, we find that net speculative positioning is short AUDUSD and significantly so, but it is not increasing beyond its historical extremes as the exchange rate plums new depths. Retail traders on the other hand are growing increasingly emboldened by the drop – though they are only looking for the range opportunities and remain very wary of the full reversal. 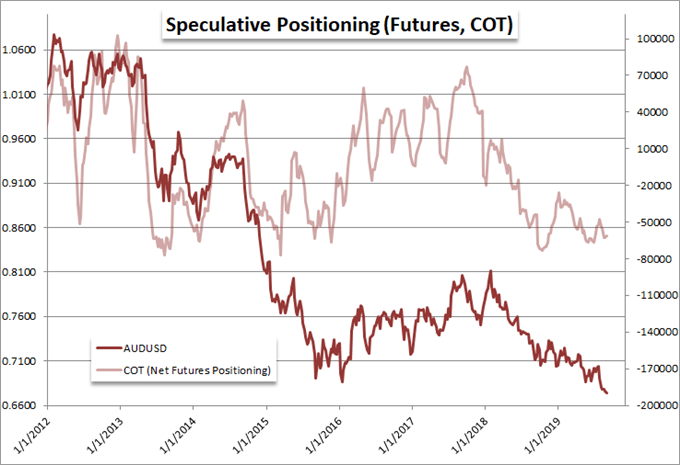 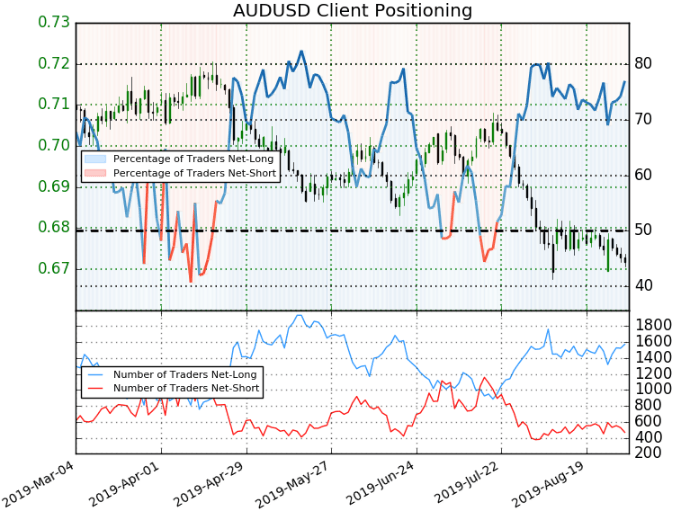