HomenewsCurrency ForecastBank Of Canada And Japan Rate Decisions: What To Expect

Bank Of Canada And Japan Rate Decisions: What To Expect

With the Easter holidays behind us, we are finally beginning to see bigger moves in currencies. dropped to its lowest level in 3 weeks, climbed to its strongest level in more than 2 years and fell to 3-month lows. The greenback rallied against all of the major currencies except for the , which was held back by yields and 112 resistance. An unexpected increase in helped to support the and sustain risk appetite but EUR and A$ are lower because investors are worried that Wednesday’s Australian inflation and German reports will surprise to the downside. Despite an increase in commodity prices, consumer inflation expectations in Australia have been falling. In the Eurozone, the outlook remains negative as the Bundesbank thinks growth could be weaker than forecast.

However Wednesday’s biggest event risk will be the Bank of Canada’s . shot higher Tuesday despite rising because investors are worried that the central bank could talk rate cuts. In March, the BoC sent USD/CAD tumbling to 2-month lows by expressing concern about growth pointing to increased uncertainty on the timing of future rate hikes. At the time, they were worried about consumer spending, housing and inflation. Fast forward 7 weeks and some of those concerns will be alleviated by the recovery in and an uptick in growth. However that may not be enough to alter the central bank’s dovish bias. Aside from the monetary policy announcement, we’ll also hear from Governor and Deputy Governor . USD/CAD has been trading in a narrow 1.3290 to 1.3400 trading range since the beginning of the month and Tuesday’s breakout is a sign of investor expectations. If the BoC downplays recent data improvements and focuses on uncertainty, USD/CAD could squeeze up to 1.35. If there is even a hit of optimism however we could see USD/CAD slip back down to 1.3330 quickly. 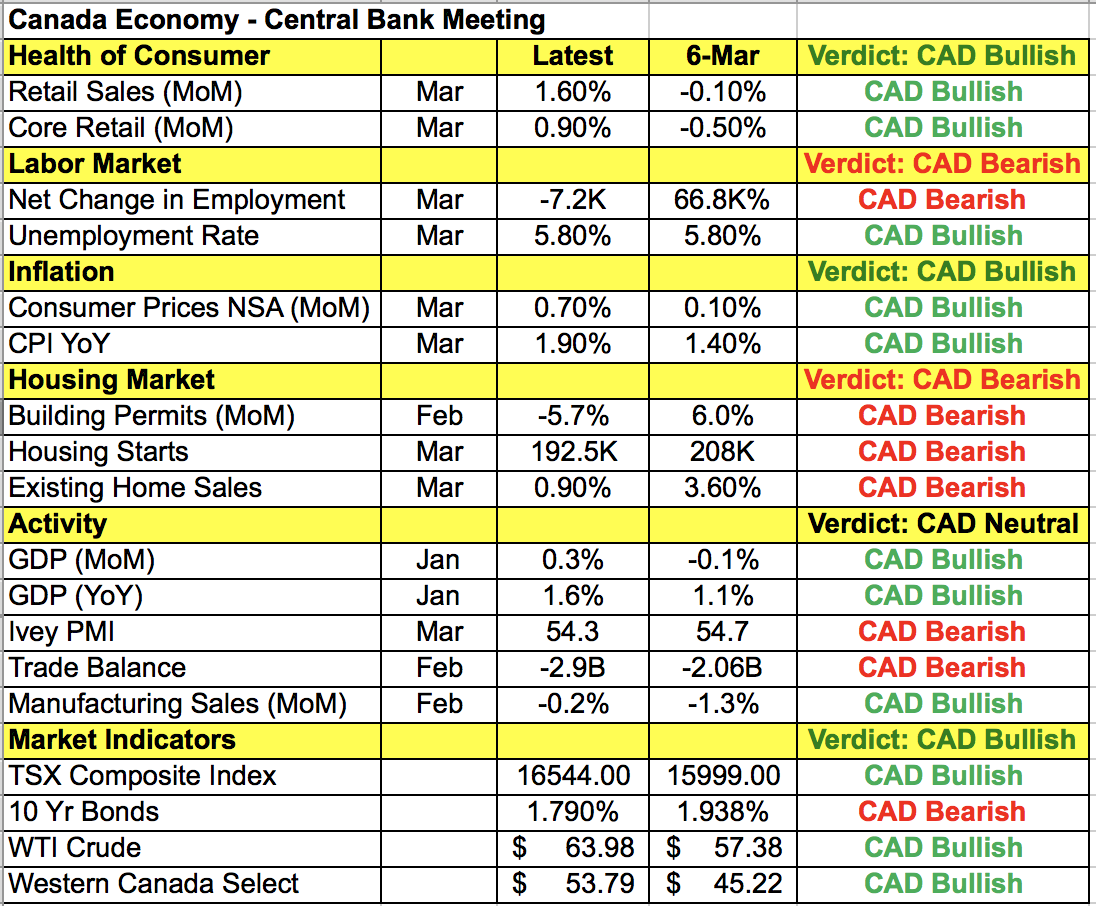 The Bank of Japan begins their 2-day monetary policy meeting on Wednesday and Japan’s economy hasn’t been doing great. According to the latest reports, growth is slowing, the narrowed, is down, , and growth are weaker and is low. Japan’s economy is widely believed to have contracted in the first quarter. None of this will push the central bank to change monetary policy but they could downgrade their economic assessment. Japan and the US are motivated to reach an agreement quickly but there’s a lot at stake and President Trump has made his displeasure with Japan’s massive trade surplus well known. The risk is to the downside for the but chances are there will be very little reaction to BoJ.