HomenewsMarket OverviewBank Of Canada Could Hold Rates Amid Trade Uncertainty

Bank Of Canada Could Hold Rates Amid Trade Uncertainty

The Canadian dollar is one of the best performers in the month of April versus the U.S. dollar. The loonie has appreciated more than 4 percent versus the greenback as the softness in the USD has combined with stronger oil prices due to geopolitics. Canadian fundamentals have been mixed with strong employment data but a weaker housing sector. Last year, the Bank of Canada (BoC) raised rates two times and once already this year, leaving the benchmark rate at 1.25 percent unchanged in March. The hawkish tone of 2017 is gone from the central bank’s rhetoric and replaced with rising concerns for the uncertainty of NAFTA and inflationary pressures.

The BoC will release its rate statement on Wednesday, April 18, at 10:00 a.m. EDT. At the same time the quarterly Monetary Policy Report will be published with BoC Governor Stephen Poloz hosting a press conference at 11:15 a.m. EDT. The central bank is expected to keep rates on hold awaiting a more clear outcome on trade negotiations and other internal economic factors.

The started the month of April at 1.2898 and has depreciated steadily as the Trump administration has opened multiple fronts engaging in trade disputes that have hurt the dollar despite a growing economy and the support of the U.S. Federal Reserve with a rate hike in March. The loonie lost ground at the beginning of the year as concerns about NAFTA started to rise given the hardball tactics from the Trump Administration. Canada and Mexico did not back down what they deemed unreasonable demands and that strategy appears to have paid off as the U.S. is back at the table with a softer stance. The deal has not been renegotiated and the escalation of the Syrian conflict has probably pushed the timetable a few weeks out. 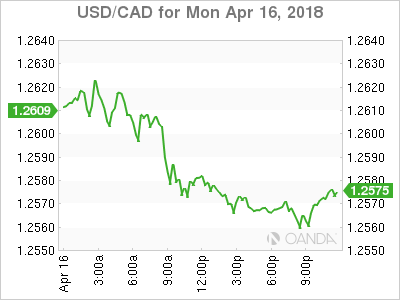 The Canadian dollar has gained after the news that Prime Minister Justin Trudeau attended an emergency summit to deal with an oil pipeline. The loonie historically has been highly correlated with energy prices due to them being one of Canada’s biggest exports. The fall in crude prices in 2015 tested that correlation but it appears its back in play. Oil prices rose after the Organization of the Petroleum Exporting Countries (OPEC) and other major producers agreed to limit crude output. Tensions in the Middle East have kept prices above $60 per barrel. 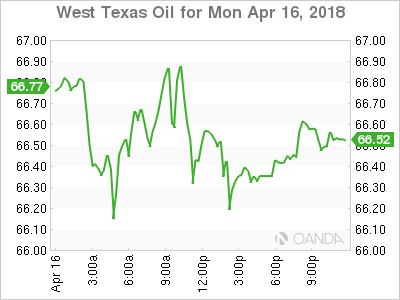 Last month, inflation beat expectations to record a gain of 2.2 percent year over year. Statistics Canada will release monthly inflation data on Friday, April 20, at 8:30 a.m. EDT with the prices of gasoline, cars and mortgage interest costs the main contributors to an increase in inflation. The pickup in consumer prices is adding pressure on the Bank of Canada to keep rising rates to cool down the economy. The slowdown in the last quarter of 2017 has put the central bank in a tough spot. Delaying the hike could rev up growth, but waiting too long could end up causing a recession. To complicate matters more for Poloz’s decision is the fact that Canadian household took advantage of record low rates, to incur in their own record debt levels. A recent poll shows that one third of respondents said that rising rates could push them towards bankruptcy.

The BoC will update its quarterly growth projections with a possible downgrade in the cards. In January the bank had GDP growth for 2018 at 2.2 percent and 1.6 percent in 2019, these could be adjusted lower but there is also the fact that in March Poloz stressed that he is not afraid to let rates at current levels to boost the economy. Canadian banks are forecasting at least two rate hikes, with some going as high as three from the central bank, but not necessarily in the next couple of meetings. The big NAFTA unknown would have to be sorted before Poloz can commit to a monetary policy move that would not have to be reversed by an external event.