As expected, the Bank of Canada left its overnight rate target unchanged at 1.25% today.

The first takeaway from the statement is that the BoC is confident that “higher interest rates will be warranted over time,” thanks, in part, to firmer wage growth and the recent build-up in consumer prices pressures. This being said, the general tone of the statement is dovish, ending with this key passage: “Governing Council will remain cautious with respect to future policy adjustments, guided by incoming data.” In other words, the next move by the BoC is definitively expected to be a hike but there is no more guidance than in January as to when it may occur.

The BoC provides justifications to delay a rate hike.

Second, the BoC appears more concerned about uncertainty, citing “escalating geopolitical and trade conflicts risk undermining the global expansion.” Moreover, in the MPR, the BoC expects a significantly negative impact of U.S. trade and fiscal policies and uncertainty on Canadian exports and business investment. For instance, growth in Canadian exports was revised down in 2018, reflecting transportation bottlenecks in the energy sector and a structurally declining market share of the U.S. market.

Third, two factors led the BoC to revise upward its potential output growth estimate: the efficient combination of increased labour and business investment improving labour productivity and the adoption of new digital technologies by companies. Potential output growth is now projected to average 1.8% per year over the 2018-21 horizon. Combined with real GDP growth running a notch faster (2.0% in 2018, 2.1% in 2019, 1.8% in 2020), consumer price pressures are expected to build up only slowly overtime. Ultimately, this dynamic reduces the necessity to raise rates in the near term and reinforces the BoC’s intention to keep its policy rate below the neutral rate for some time, or at least until the global protectionist threat dissipates: “some monetary policy accommodation will still be needed to keep inflation on target.”

Bottom Line: Core and total CPI inflation stands around 2.0%, sitting comfortably in the 1%-to-3% range while the Canadian economy is running at close to full capacity (see chart). If the economic momentum evolves as expected in the new MPR, the BoC should be able to smoothly increase its policy rate sooner than later but the BoC deliberately avoided providing a timetable for such a move. We forecast one additional 25bps hike in 2018, likely in early 2018 Q3, followed by two additional increases in 2019. 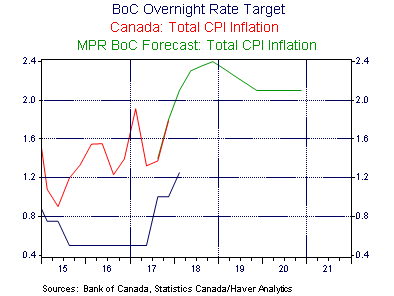 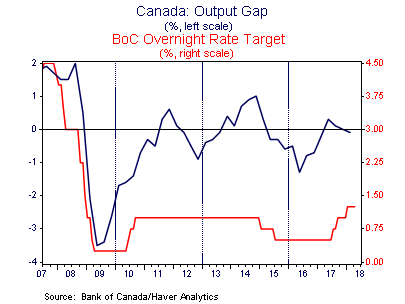