The Bank of Canada today maintained its target for the overnight rate at 1.75 per cent. The bank rate is correspondingly 2 per cent and the deposit rate is 1.5 per cent.

The global economic expansion is moderating largely as expected, but signs are emerging that trade conflicts are weighing more heavily on global demand. Recent encouraging developments at the G20 meetings are a reminder that there are upside as well as downside risks around trade policy. Growth in major advanced economies has slowed, although activity in the United States remains above potential.

Oil prices have fallen sharply since the October Monetary Policy Report (MPR), reflecting a combination of geopolitical developments, uncertainty about global growth prospects, and expansion of U.S. shale oil production. Benchmarks for western Canadian oil – both heavy and, more recently, light – have been pulled down even further by transportation constraints and a buildup of inventories. In light of these developments and associated cutbacks in production, activity in Canada’s energy sector will likely be materially weaker than expected. 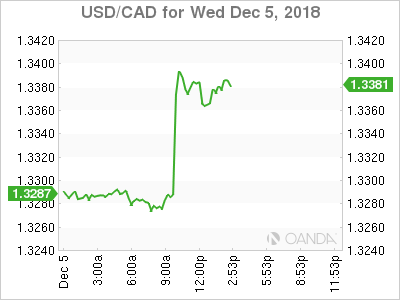 The Canadian economy as a whole grew in line with the bank’s projection in the third quarter, although data suggest less momentum going into the fourth quarter. Business investment fell in the third quarter, in large part due to heightened trade uncertainty during the summer. Business investment outside the energy sector is expected to strengthen with the signing of the USMCA, new federal government tax measures, and ongoing capacity constraints. Along with strong foreign demand, this increase in productive capacity should support continued growth in exports.

Household credit and regional housing markets appear to be stabilizing following a significant slowdown in recent quarters. The bank continues to monitor the impact on both builders and buyers of tighter mortgage rules, regional housing policy changes, and higher interest rates.

Read the rest of the statement at BankofCanada.com