The U.S. dollar was mixed against majors on Tuesday. The JPY lost as risk appetite is back in vogue with investors and the GBP has risen after the market digested the resignations of pro-Brexit members of Theresa May’s government. The Bank of Canada (BoC) will publish its rate statement on Wednesday, July 11, at 10 a.m. EDT. The market has priced in a 96-percent chance of an interest rate hike. BoC Governor Stephen Poloz will host a press conference where he could offer further insight into the decision or hedge if market reaction is too extreme in his view.

Loonie Awaiting Bank of Canada Decision
The gained 0.05 percent on Tuesday. Monthly Canadian GDP data at the end of June surprised to the upside and with a positive business outlook added to a strong jobs report the Canadian central bank will be looking to close the gap with the U.S. Federal Reserve funds rate. Fed members have signalled that more rate lifts are coming and two have already been priced in. The BoC is in no hurry to hike, but there is pressure to act later in the second half of the year if it decides to hold in July. 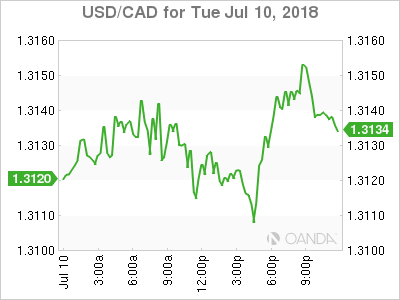 While the lift in interest rates will not be a surprise, there is more anticipation for what Poloz has to say. Hawkish comments by Poloz earlier in the month taken into consideration for the meeting, although the market is forecasts more dovish remarks given the uncertain global trade scenario. If Poloz maintains a neutral to hawkish stance, there could be a sharp movement in the currency.

Commitment of Trades (CoT) data out of the CFTC shows large investors are bearish on the currency, which could create a short squeeze scenario all depending on what Poloz ends up communicating to the market.

The Canadian economy had a solid start to 2017, but the pace kept slowing down as the Trump administration attacks on trade were gaining steam. The uncertainty about trade made the start of 2018 a difficult one for the loonie and until recently the worst performer against the USD from major currencies.

Elections in Mexico and the upcoming mid-terms in the U.S. make a NAFTA renegotiation less likely this year, which minimizes but does not take out of the equation an end of the trade deal. Fundamental indicators in Canada have improved giving the central bank some room to close the gap between the U.S. and Canadian interest rates.

Yen on Back Foot as Risk Appetite Returns

The lost 0.38 percent since Monday. The currency pair is trading at 111.27, a six-month high for the USD against the JPY. The yen is a preferred safe haven during times of uncertainty, but as investors seek returns they quickly sell the Asian currency. Trade war fears have waned this week and emerging markets have been the biggest winners at the expense of the JPY. 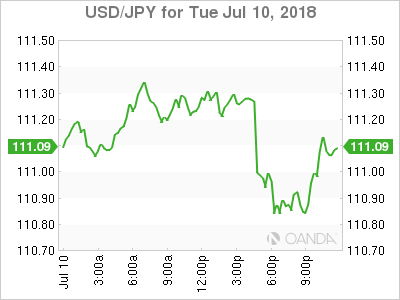 The gained 0.18 percent on Tuesday. Cable is trading at 1.3279 on the midst of Theresa May fighting for a soft Brexit and her job. On Friday it all seemed to have worked out with little opposition for her plans of an orderly divorce with the EU that allowed the UK to have access to the single market. Hard Brexit backing members of the cabinet started resigning over the weekend. The pound started to drop as Boris Johnson resigned and concerns rose of a confidence vote against May. The fact that May has survived a leadership challenge and some encouraging comments out of Brussels have boosted the currency. 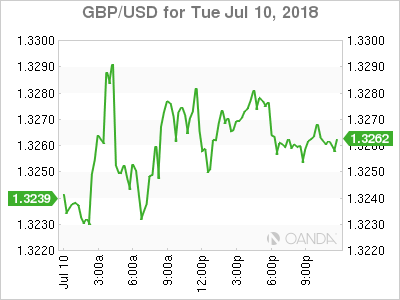 The Conservative party remains divided, but the Eurosceptics do not have enough fire power to topple May so for now a soft Brexit is the only viable strategy. May has the support from Michael Gove, but if that were to change, it could mean her ouster, with Gove a likely replacement.