After Wall Street suffered its worst annual losses in a decade, investors looking for better returns may finally pivot to emerging markets, which remain very cheap compared to U.S. stocks.

“We think emerging markets are being oversold,” says James Ashley, head of international market strategy at Goldman Sachs Asset Management at a briefing in Singapore. “We would see this as an attractive entry opportunity.”

Emerging markets offer investors a classic high-risk, high-reward scenario. The EM nations, which are as varied as Russia, India, Taiwan and Brazil, represent 40% of the world’s economic output, but just 12% of global market value, and as developing nations transition from agriculture and commodities to manufacturing and technology, the opportunity is expected to grow.

But the level of risk shouldn’t be overlooked. MSCI’s logged losses of more than 16% for 2018 as a whole, and equity markets in , and also posted their worst annual performances in a decade. On a more upbeat note, , which saw their final day of trade on Friday, finished up 12 percent for the year. 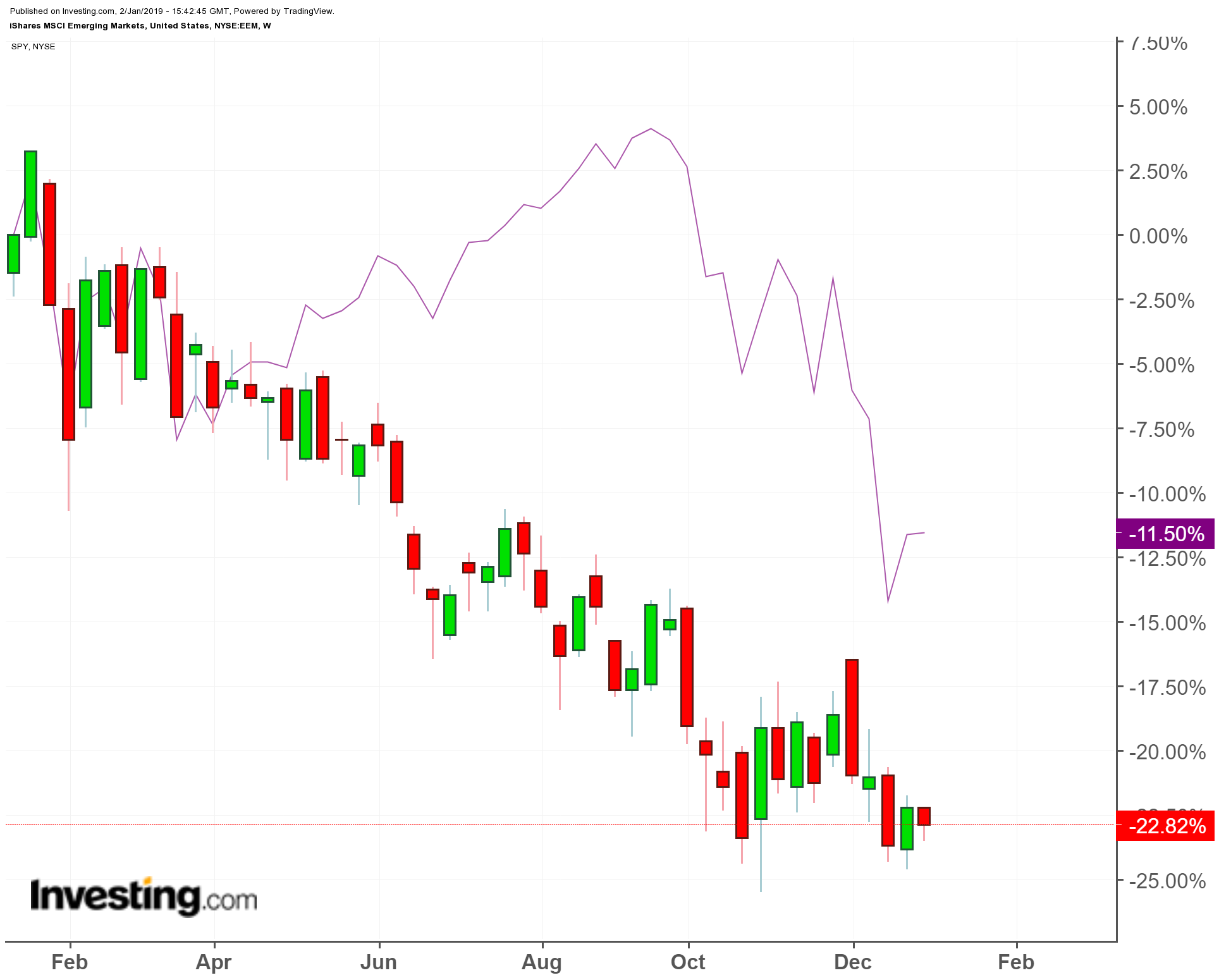 The relative performance of U.S. equities compared with the rest of the world is still at its highest level since 1970, according to the Financial Times. And looking to just the emerging markets, the ratio of the iShares MSCI Emerging Markets ETF (NYSE:) and the SPDR S&P 500 ETF (NYSE:) stands at 0.16, around levels last seen in 2004.

Research Affiliates, which advises more than $160 billion in institutional investment assets, says the gap in valuations between the U.S. and emerging world is unjustified by fundamentals. According to the latest data from the end of November, the CAPE (cyclically adjusted price-to-earnings) for emerging markets was 14.9. Russia’s CAPE was the lowest, at 6.5, while Turkey came in at 8.1, China at 14.8 and Brazil at 14.9. India’s CAPE is much higher at 21.5.

The CAPE ratio has been shown to forecast future returns. If the ratio is low, meaning the price is low relative to earnings, future returns tend to be high.

The median is 16, says Chris Brightman, CIO at Research Affiliates. The U.S. equity market meanwhile is trading at 29.7, close to as expensive as the market ever gets. Notes Brightman:

“The only times in history where we’ve seen the U.S. stock market above a 30 CAPE is 1929 and the late 1990s and neither one of those episodes ended well for equity investors.”

With Visibility Tough In 2019, Buyer Beware

Nonetheless, emerging market risks are varied, and can stem from an assortment of catalysts.

“Everything you read and observe is true,” Brightman says.

“We are in a very nasty trade war with China. The political environment in Brazil is an absolute mess. Russia is a nasty country that interferes in our elections and has just started a hot war with Ukraine again. India has considerable problems with its nationalist populist government. South Africa has rampant corruption. Let’s not even go into the problems in Turkey.

Turkey and Argentina justifiably stoke concern. But Turkish equities represent less than 1% of EM stocks, according to Research Affiliates. On the other hand, China, Korea, Taiwan, India and Russia all have low external-debt-to-GDP ratios and ample foreign exchange reserves. “Together, these large, low-crisis-risk markets compose about 60% of the MSCI Emerging Markets Index,” according to the company.

But not all money managers are convinced.

Gabriela Santos, global market strategist at JPMorgan Asset Management, says the outlook for EM stocks in 2019 is hard to assess, as several variables such as Fed , continued trade tensions and a Chinese slowdown undermine visibility. Yet despite the uncertainty, now is a good time for investors without any exposure to EM to take a multi-year approach, Santos says.

“For certain investors, especially in the U.S., who are a bit hesitant to invest in emerging markets — for those investors, we see it as a buying opportunity because we have seen valuations come down 15%.”

“The U.S. markets, especially the small capitalization stocks as reflected by the Growth, look expensive to me— overvalued. The stock analyst in me, looking bottom up, says these markets — U.S.A. — are just too expensive. They are going to correct, and it’s hard to envision the U.S. pulling back and the world not following.”

Still, she eyes opportunity in China, noting her firm scooped a few bargains there in recent months.

“We love Yum China (NYSE:) here. It has cash on the balance sheet, so even if the business slows, they have lots of dry powder to award us with dividends and share buybacks, but we still have dry powder to selectively pick at names as the opportunity arises.”

Some of her high-quality favorites, though, like consumer staples in India, remain expensive, she says. “These are really high-quality businesses. We are picking our spots.”

What makes large EM countries like China and India especially attractive is that their economic growth is fundamentally linked to the rise of their middle class, JPMorgan’s Santos says. “Right now in India, only 12% of the population is middle class.” However,

“By the next decade, it’s expected that 80% of the population will be middle class. Think of the hundreds of millions of people who will now be able to buy things that people in developed markets take for granted — beauty products, cooking supplies, electronics — and who are now joining the financial sector — bank accounts — that is the multi-year story that we want to tap into when we buy emerging markets.”

But while large economies such as China and India present solid trajectories, smaller markets are riskier, Geritz says. “The smaller emerging markets and frontier just have no love right now. This could be a spot for contrarians. I’m still worried about the interest rate cycle globally and the impact on stocks.”

Nonetheless, she’s not particularly sour on emerging markets. U.S. multiples look as high as the 1999 bubble and in some cases worse, she says. “I’d tread lightly everywhere.”