Be Prepared, It’s An Action-Packed Week In Capital Markets

Monday, Jan. 28: Five things the markets are talking about

Global equities start the week on the back foot, as capital markets weigh political developments, from Sino-U.S. trade to Brexit, against U.S. corporate earnings, that have to date, surpassed many analysts expectations, and this despite ongoing signs of a global economic slowdown.

This is expected to be an action-packed week amongst the various asset classes where investors will face some key tests – Chinese President Xi’s top economic aide, Vice-Premier Liu He, will meet with U.S. trade negotiator Robert Lighthizer and U.S. Treasury Secretary Steven Mnuchin on Wednesday and Thursday.

There’s the U.S. governments ongoing talks on border security and tomorrow, the U.K. parliament is expected to vote on amendments to Prime Minister Theresa May’s Brexit deal with the E.U. On Wednesday, the E.U. Parliament will debate Brexit.

Also Wednesday, investors will be digesting the Fed’s latest monetary policy meeting outcome. If the Fed is to be keep its views unchanged this week, it should maintain a “cautiously friendly environment” for risk assets. The market has priced in ‘no’ rate hikes stateside in 2019. Fed Chair Jerome Powell will hold a news conference after the FOMC rate decision.

While on Friday, the granddaddy of U.S. economic indicators will be delivered – U.S. (NFP).

In Japan, the fell overnight as a stronger yen (¥109.35) weighed on the broader market, however, losses were limited as investors remain reluctant to enter into larger positions ahead of Q3 corporate earnings reports this week. At the close the Nikkei share average dropped 0.6%, while the broader shed 0.7% with 32 of the 33 sub-sectors in the red.

Down-under, Australia was closed for a bank holiday. In South Korea, the stock index ended little changed overnight amid investor caution ahead of the FOMC rate decision and Sino-U.S. trade talks. The index settled largely unchanged at -0.02%.

In China, equities ended lower on Monday as downbeat industrial profit and weaker GDP data last week reinforced concerns about a slowing economy and this despite the People’s Bank of China (PBoC) freeing up a potential $37B for bank lending and while a new CEO was named to lead the country’s main securities regulator. At the close, the index was down 0.18%, while the blue-chip index was down 0.02%. In Hong Kong, it was a similar story, the ended nearly flat, while the inched up 0.1%.

In Europe, regional bourses trade lower across the board after a lower session in Asia and lower U.S. futures as the U.S. government again opens fully for business after 35 days. 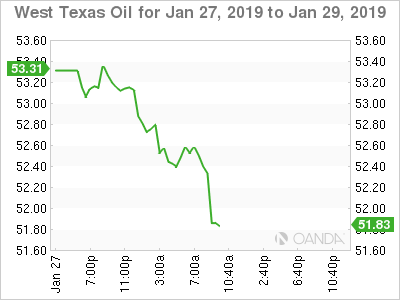 Ahead of the U.S. open, oil prices are under pressure, down over 1% after data from Friday showed that U.S. companies added rigs for the first time this year, a sign that crude output may rise further, and as China reported additional signs of an economic slowdown.

A higher U.S. production rate continues to eat away at OPEC+’s efforts to support crude prices.

U.S. crude oil production rose to a record 11.9 million bpd in Q4 2018 and there is evidence that U.S. production rates will increase further, especially when you see data from Baker-Hughes showing that U.S. energy firms raised the number of rigs looking for new oil for the first time this year to 862 – an addition of 10 rigs. The U.S. is now the world’s largest oil producer.

A global economic slowdown supported by a persistent weakness in Chinese data and egged on by a trade dispute between U.S. and China is also weighing on fuel demand-growth expectations.

China is trying to stem the slowdown with aggressive fiscal stimulus measures, however, there are concerns that these efforts may not have the desired effect as China’s economy is already burdened with massive debt.

Gold prices are trading atop of their seven-month peak, on hopes that the Fed will keep interest rates unchanged during its two-day policy meeting this week. is a tad lower at $1,301.81 per ounce, while U.S. have rallied 0.2% to $1,300 per ounce.

Note: The Fed meets between Jan. 29 and Jan. 30, and Powell is expected to “acknowledge growing risks to the U.S. economy as global momentum weakens.” 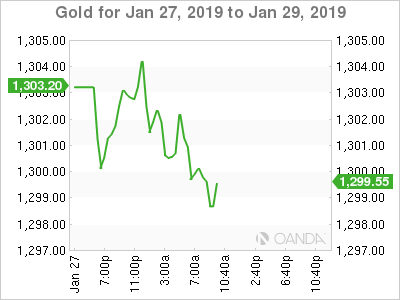 Eurozone sovereign bond yields are expected to remain within striking distance of this month’s lows as a number of factors should be supportive of lower yields this week – ECB speakers are expected to deliver ‘dovish’ rhetoric, aided by the the Brexit vote, Wednesday’s FOMC decision, global mixed data and month-end index flows – these are all reasons enough to keep eurozone government bond yields atop of their two-year lows.

The slowdown in the eurozone’s economic growth is especially supportive of German Bunds – the 10-year Bund yield trades unchanged at 0.14% – coupled with last week’s decline in January PMI’s/Ifo is proof that investors should not be expecting an economic revival in the near term. 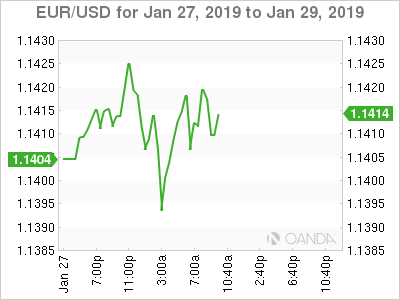 This is a very sensitive geo-political week for the FX market, with China-U.S. trade talks, the Brexit vote, FOMC rhetoric, NFP and corporate earnings, the U.S. investor should expect some nervous price moves to occur at inconvenient times with little liquidity.

The markets focus on Wednesday will be the Fed’s rate decision with dealers expecting the Fed to maintain the cautiously friendly environment for risk assets which has been the main trait in January so far.

(£1.3180) is a tad softer by 0.2% ahead of tomorrow’s U.K. parliamentary vote on Brexit. The key focus will be on the possible “amendments” to May’s Brexit deal. Currently there were two rival visions that sought to take control of the Brexit process. An extension of Article 50 appears the be the most likely outcome in the current process.

(€1.1419) is little changed and is expected to continue to trade between €1.13 and €1.15 in the near term as concerns about the U.S. economy and Fed’s policy offset eurozone economic weakness, which should curtail most dollar gains and the ‘single unit’s’ losses. The Fed is likely to reaffirm “patience on rates and its data dependency,” even as U.S. Q4 GDP data is expected to highlight a stronger U.S. economy. 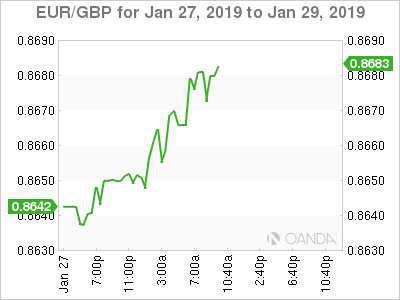 Data from the ECB this morning showed that Bank lending to businesses and households in the eurozone was stable in December.

Note: The eurozone economy is heavily dependent on the availability of funding. However, lending rates have remained well below the pre-crisis levels. In 2007 and in H1 of 2008, bank lending to businesses was running at rates well above +12%. 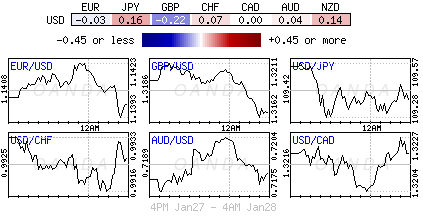