Canadian inflation increased 0.4% m/m in April, in line with consensus. On a year-over-year basis, inflation rose 2.0%, up from 1.9% in March. Relative to march inflation, three of eight major components showed higher inflation, and one remained unchanged (see chart). Notably, gasoline prices increased 10% month-over-month due to higher prices, turnaround at refineries and the introduction of the federal carbon tax in four provinces on April 1. This single category contributed 0.3 ppt to the 0.4% m/m gain. Elsewhere, shelter costs, the component with the largest weight (27%), increased 0.2% month-over-month and contributed 0.1 ppt.

Beyond the headline number, the underlying inflationary pressures haven’t increased. Indeed, the Bank of Canada’s CPI-common, which extracts underlying inflationary pressures that are assumed to stem from capacity pressures on the economy, held steady at 1.8% for a third consecutive month. This is consistent with the BoC’s latest assessment of the Canadian economy justifying the complete removal of references to future interest rate hikes in its latest monetary policy decision. In fact, in light of the current weakness in the Canadian economy, the output gap (difference between actual GDP and potential GDP) stood at -0.5% in 2019Q1, suggesting some moderation in the CPI common for the months to come (see chart). Nevertheless, we still expect a pickup in economy activity later this year driven by a Chinese rebound, a resolution of trade tensions between the United States and China and the dissipation of early-2019 investments cuts in the Canadian oil and gas sector. When this happens, the Canadian output gap should start shrinking again, enabling the BoC to move with a probable interest rate hike in the first half of 2020. 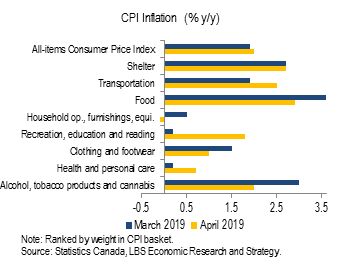 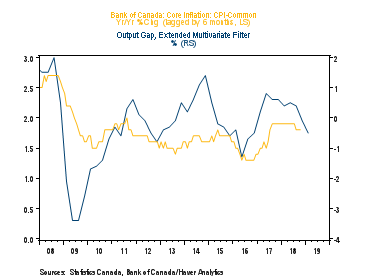