HomenewsAnalysisBig Tech’s Tumble: Why AMZN, MSFT And Other FAAMG Stocks Are Stalling

Big Tech’s Tumble: Why AMZN, MSFT And Other FAAMG Stocks Are Stalling

For traders who follow solely the broad US indices, this week has been much the same as past two months: Despite over 40M new unemployed Americans over the last 10 weeks (including a just-announced 2.1M more over the last week), the US stock market continues to grind inexorably higher to reverse its precipitous March drop. But if you’re trading individual equities, in particular the gigantic FAAMG names (Facebook (NASDAQ:), Apple (NASDAQ:), Amazon (NASDAQ:), Microsoft (NASDAQ:), and Google (NASDAQ:)) that have led the market higher over the last decade, you’ve probably noticed a major shift “under the hood” of the broader indices.

In a development that many believed impossible, these market leaders are dramatically lagging the lower quality, “old economy” stocks so far this week. To take just one example of this phenomenon, two stodgy, traditionally brick-and-mortar apparel companies, L Brands (NYSE:) and Gap Incorporated (NYSE:), are among the top 3 performers in the this month, while stocks like Amazon (AMZN) and Microsoft (MSFT) are essentially flat. How could these highly-indebted retailers, which quite literally cannot conduct business at most of their locations amidst the ongoing lockdown, outperform highly-profitable, internet-enabled behemoths?

Put simply, they aren’t. But their stocks are. And that’s actually a relatively common occurrence, despite what Warren Buffett would tell you.

“If something cannot go on forever, it will stop” – Herbert Stein

If you were to objectively create a list of the “best” companies on the planet, you’d be hard pressed to avoid putting the FAAMG stocks at the top. They all have fortress balance sheets, generate massive cash flows, and offer sustainably high returns on equity. Indeed, the COVID-19 induced recession (and the accompanying shift to “stay at home” work, entertainment, and shopping) has only widened the gap in corporate performance against most competitors.

But (and you knew there’d be a “but”), the extent to which these trillion-dollar behemoths are crushing the competition is quickly becoming unsustainable. As Ritholtz Wealth Management’s Director of Research, Michael Batnick recently noted, “Since 2014, the market cap of the S&P 500 grew at an annualized rate of 7.7%. Over the same time, the market cap of the FAAMG stocks grew at 21.6%, and now represent roughly one-fifth of the index. If these growth rates were to continue, in 7 years these 5 stocks would represent half of the index in terms of market capitalization. 6 years later, they would represent the whole thing. For reasons that are very obvious, this cannot happen.”

Batnick goes on to note that, “Eventually, this growth is going to be a headwind, not just because it’s harder to grow from a base of 100 than from a base of 10, but because sooner or later, Uncle Sam will come knocking…How long before Amazon is forced to spin out AWS? How long before Facebook and Instagram have a forced separation? I’m not predicting this does happen, I’m only pointing out that if these growth rates were to continue, then it will happen.”

Earlier this week, investors got a taste of what such anti-monopoly regulations could do, with President Trump vowing to “strongly regulate or close…down” social media platforms amidst his ongoing spat with Twitter; the President has also expressed similar sentiments toward Google and Amazon in the past. Meanwhile, beaten-down, small capitalization value stocks have the most to gain from the global economy emerging from recession, explaining why they’ve outperformed the “big tech” names on days when there’s positive news on the COVID-19 vaccine/treatment front, like we’ve seen so far this week.

So what opportunities does this situation present?

For traders trying to capitalize on this situation, the most important thing to realize is that this week may not precisely mark the shift away from “big tech” outperformance; in fact, it probably won’t. We’ve seen similar brief periods of underperformance by FAAMG names over the past half decade, before they went on to resume their impressive leadership again. The same dynamic could ultimately play out again this time, especially if we see setbacks as the global economy reopens or a dreaded “second wave” of infections in the second half of the year. As the chart below shows, previous instances of outperformance in value stocks relative to growth stocks (IWD/IWF) have been short-lived, and it may once again be premature to declare this massive, long-term trend over: 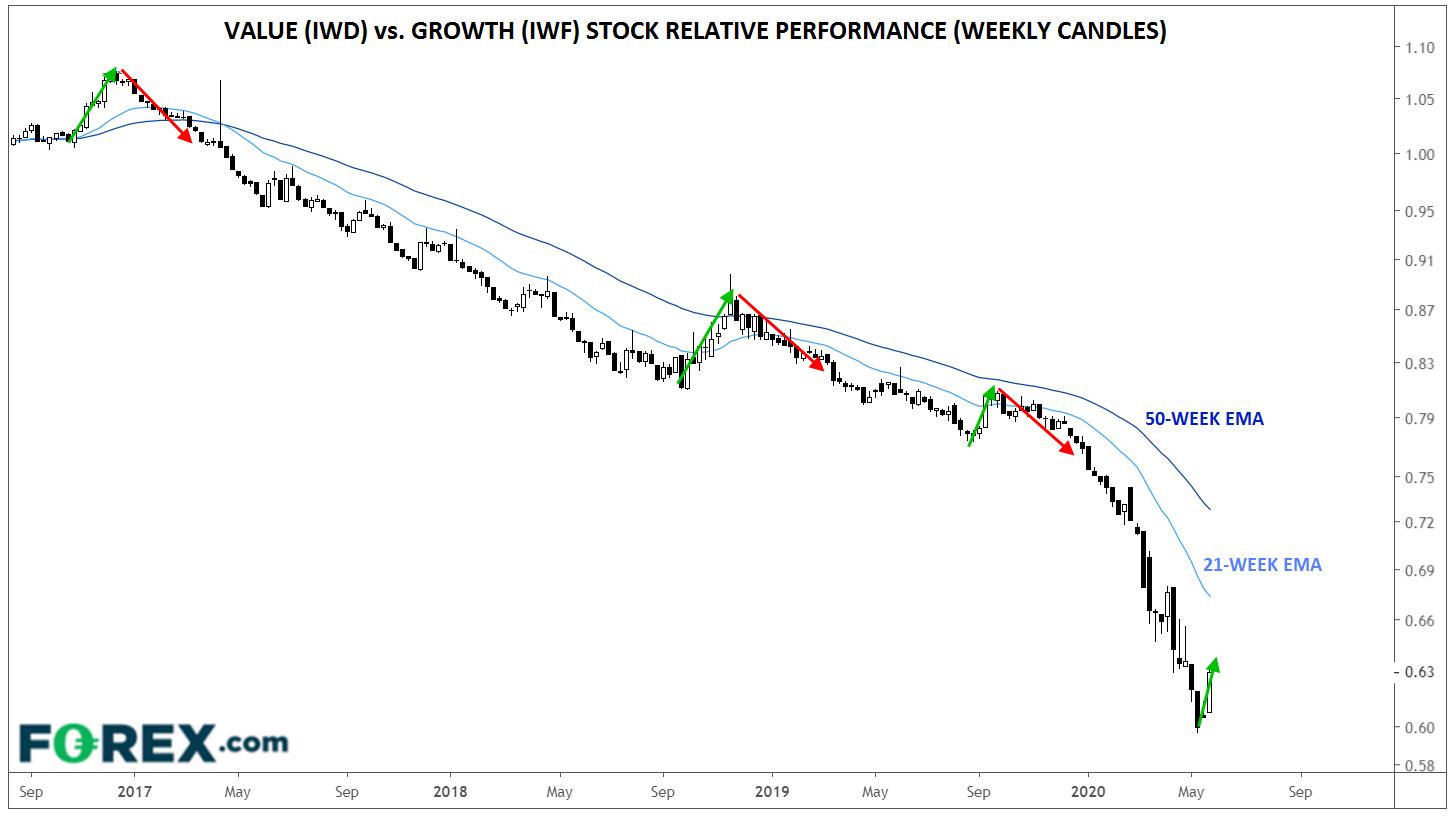 That said, the evidence suggests that distressed value stocks historically outperform coming out of recessions, so long-biased traders may want to consider “dumpster diving” among the most beaten-down stocks for the most upside potential. Over the last 3 months, the worst performing names in the S&P 500 include a stomach-churning cross-section of Energy (OXY), Consumer Discretionary (COTY), Airlines (UAL), REITs (SPG), and Cruise line stocks (NCLH), along with everyone’s favorite embattled manufacturer, Boeing (NYSE:). 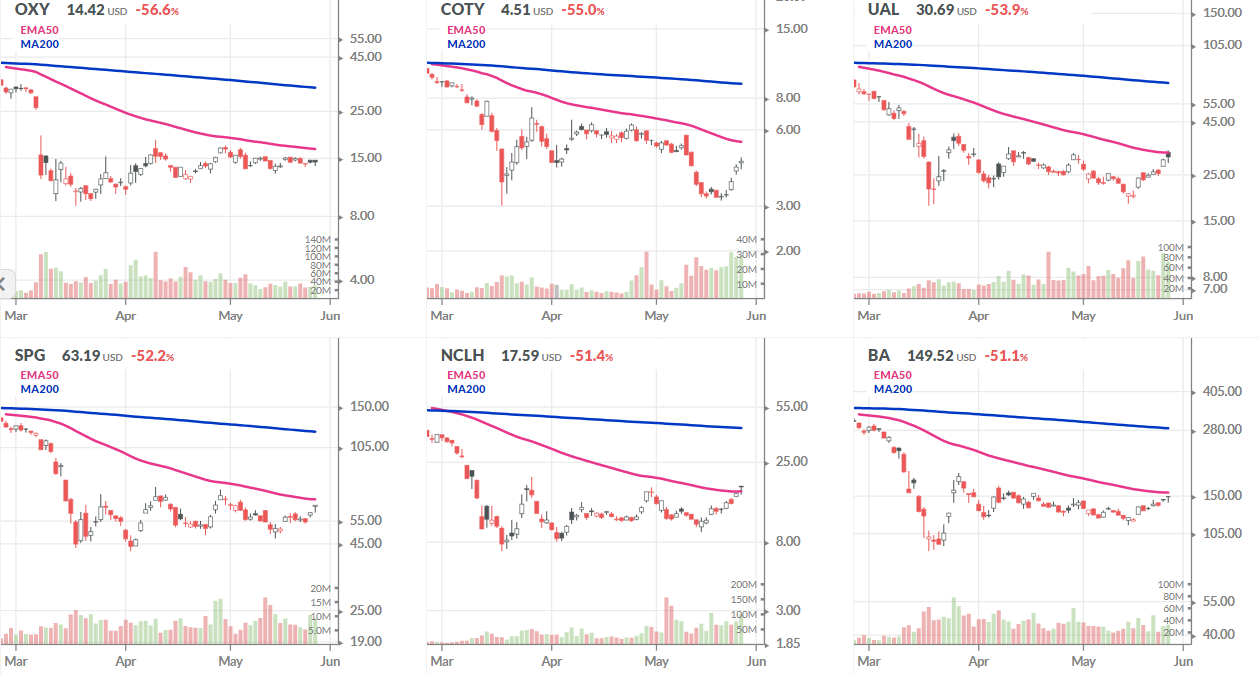 Though they’re painful to buy in the current environment (indeed, partially because they’re painful to buy in the current environment), these are the types of stocks and sectors that could see the most explosive short-term upside as the global economy gradually shifts from shelter-in-place to a semblance of “business as usual.” Traders who have grown accustomed to “having their cake and eating it too” over the last half decade by buying big, safe technology stocks that “always” outperform the broader market should take note!