Calm After the Storm but Sentiment Remains Negative.

The cryptocurrency market is trading nervously near its recent lows with nothing to suggest that prices will move markedly higher. ‘Dead Cat’ bounces may still see prices move slightly higher but there needs to be some positive fundamental news to break the engulfing bear trend. As we stand, the cryptocurrency market has lost around $630 billion from its all-time high market cap.

We recently noted the levels below as areas of potential support and stick with them unless there is any fundamental market shifts.

The latest IG Client Sentiment Indicatorcontinues to show that retail remain long of the above cryptocurrencies despite the ongoing bear market. Data show that retail are 76% net-long of Bitcoin with Ripple at the extreme with 95.5% of clients net-long. There have been some daily and weekly positional changes which negate heavy bearishness in the short-term, but heavy one-sided positioning continues to point to lower prices.

Bitcoin is around $1,000 lower in a week and currently trades around $6,280. There does seem to be some confluence between the mid-November low at $5,622 and the June 24 low print at $5,769 which may provide support in the casse of another sell-off. BTC continues to be the ‘best of a bad bunch’ with its market dominance rising to 55.8% from a ytd-low of 32.5% in mid-January. 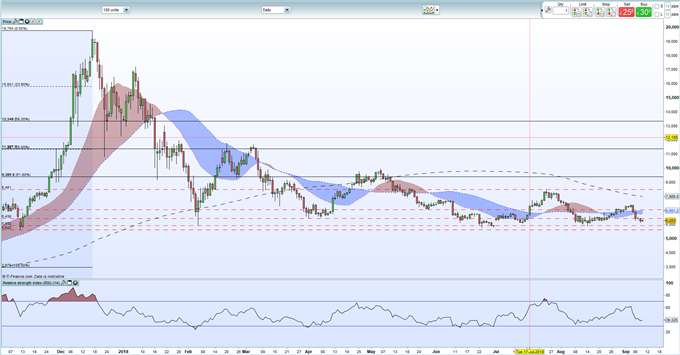 Ethereum Gives Back the Last Year

The second-largest crypto, Ehtereum, went sub-$200 over the weekend, and is now back at levels last seen in August 2017. There are some swing-lows all the way down to $140 which may temper further short-term falls but the technical chart for Ethereum remains negative. 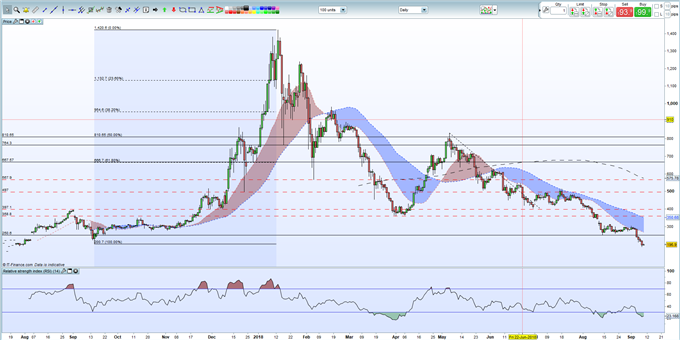 We look at Bitcoin, and other cryptocurrencies, at our Weekly Cryptocurrency Webinar every Wednesday.

If you are interested in trading Bitcoin, Bitcoin Cash, Ethereum, Litecoin or Ripple we can help you begin your journey. We have an Introduction to Bitcoin Trading Guide along with a Free Demo Account so you can practice trading this volatile asset class.

IG Sentiment Data show how retail are positioned in various cryptocurrencies and how changes in holdings can affect market sentiment.

What’s your opinion on the latest market crash? Share your thoughts and ideas with us using the comments section at the end of the article or you can contact me on Twitter @nickcawley1 or via email at nicholas.cawley@ig.com.