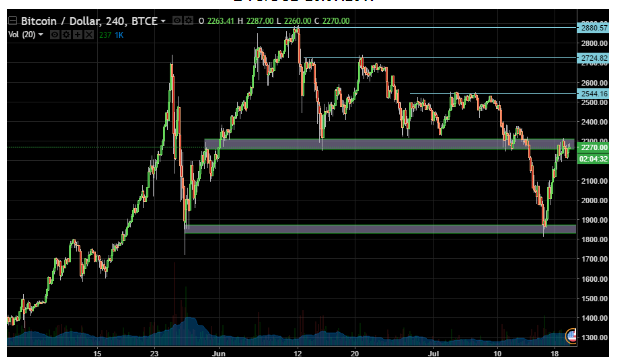 Last week, was not immune to the large correction that happened recently in the cryptospace. At one point, BTC took a steep dive below $2000 with a clear support zone of $1,800 – $1,900. However, trading volumes were not high enough to settle on a price, which suggested a fast rebound that did indeed take place.

The closer we are to August, the more volatility will be observed. The current analysis is valid only for the short term, due to unpredictability. Important news might come out and affect the sentiment of the market participants swiftly and without warning.

To recap, the scenarios suggesting that BTC may test the $1,850 zone again and then retreat to $2,300 are plausible. Nevertheless, shorting BTC after a good retest of $2,300 is extremely risky. I would advise against opening long positions with a short stop-loss, because it is not a good idea either given the volatility levels of the trading pair currently observed.

In the current market, the best idea is to buy dips that are based on the trading market’s FUD. However, potential stop-orders should be long.

The market in July – August will inevitably be affected by SegWit. Will it be implemented or not? Will there be a hard fork? SegWit is a buzzword in the world of cryptocurrencies in August.

Regarding, SegWit perspectives, the following situation is observed

The miners are unequivocally signaling their support of SegWit. As August draws closer, the more the continued support of miners and possible changes in these figures will effectively govern the price of BTC. To get a more profound grasp on the situation, it is advisable to look at what the prices were and news from when SegWit was implemented. It is possible that it would provide some illumination into what might happen with the current BTC infrastructure. 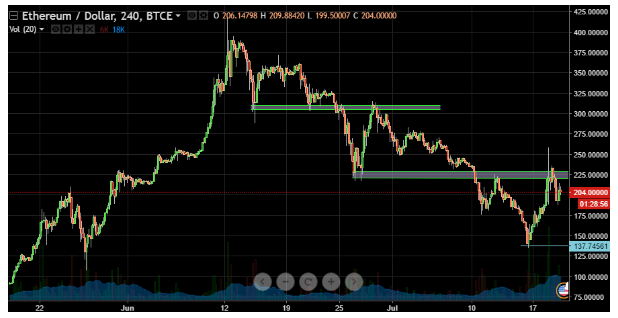 At the moment, technical analysis of ETH has little to say about the price swings. There is a lot of negative sentiment surrounding ETH and very recently it was reported that Parity >1.5 multsig was vulnerable, which has affected multiple projects. More than 150,000 ETH has been stolen by black hat hackers exploiting a vulnerability, with money being drained from prominent ICOs such as Aeternity, Swarm City, and Edgeless.

It goes without saying that these negative actions will drive the market price, especially if any evidence appears that the stolen funds have been moved to exchanges.

That is why it is very likely we will see the support zone of $137 being tested again. Correspondingly, buys made at that price level could very well yield excellent returns.

Purchases made when the prices are closer to the test point of $225 could also achieve good results. I would caution though that one should be cognizant that any bad news might decrease investor confidence and break the support zone, which will result in big price movements.

The most plausible current strategy for ETH would be to remain out of the market until new information comes out that stabilizes it.

LTC has demonstrated positive dynamics for the past month. When examining the day-today graph, two key points could be observed:

Given the fact that positive public sentiment remains and that LTC is a benefits directly in line with any positive news regarding BTC (many investors unraveled a good hedge with LTC regarding the general hassle of the crypto market, and BTC in particular), Litecoin will be a good purchase with long-term pricing targets.

In the short-term, trade from the $35 zone with a $48 target. An uptrend remains, and Litecoin’s founder Charlie Lee is doing a good job.