HomenewsCurrency ForecastBoE: Dovish Or Hawkish Hike – Or No Hike At All?

BoE: Dovish Or Hawkish Hike – Or No Hike At All?

The rally in the fizzled following the Federal Reserve’s . The decline in the greenback had less to do with the than global trade uncertainty. There were no surprises in the statement with the central bank describing economic activity as strong and affirming the need for further gradual rate increases. While some economists may argue that there was a mild dovish shift in the language, with the Fed using the word ‘strong’ instead of ‘solid’ to describe U.S. growth, the change does not cast doubt on September tightening. Instead, the prospect of escalating U.S.-Chinese trade tensions poses a risk for not only the U.S. and Chinese economies but also the global economy. This explains why sold off following the release despite a hawkish Fed and dovish BoJ.

We believe that the and dollars are particularly vulnerable to China’s trade troubles. While it is not clear whether China will retaliate to a tariff “proposal,” it will most likely have tough words for the American president. That could keep adding pressure on the , which would help its exporters remain competitive but hurt countries like Australia who count on Chinese demand. Tuesday night we learned that in Australia grew at its slowest pace in 9 months and there’s no doubt the slowdown in China and the weakness of CNY are to blame. Wednesday night’s should also surprise to the downside and even if it beats, the improvement will be temporary as trade tensions and yuan weakness are long-term drags on the economy. New Zealand’s was slightly better than expected with employment growing on an annualized basis and the rising but the economy in general is struggling. Canada on the other hand is performing well, allowing the to shrug off the decline in to rise for the fourth consecutive trading versus the U.S. dollar.

Now that the FOMC rate decision is behind us, the focus shifts to the Bank of England’s . We haven’t seen any big moves in over the past 2 weeks but the fact that GBP/USD is trading near 10-month lows tells us that investors are not looking for a hawkish outcome. This may be surprising as the market is pricing in a 91% chance of a quarter-point boost on Thursday. Considering that this would be the BoE’s first hike of the year, sterling should be trading much higher but it is under pressure because many traders believe that it will be the only change that the central bank makes this year.

The problem is that while there have been improvements in and activity, the rest of the economy experienced weaker growth over the past 6 weeks. For example, we learned Wednesday that expanded at a slower pace. also decelerated while declined. Yet the Bank of England needs to raise because inflation is running well above their 2% target with the recent decline in adding to price pressures. The BoE will have to raise its inflation forecasts and take steps to bring CPI back to target. However with the March deadline for Brexit quickly approaching, there are many reasons why UK policymakers will want to be cautious about raising interest rates. Prime Minister May is no closer to reaching a deal and with each passing day, the odds of a no-deal Brexit are growing.

Aside from a , the and Governor ’s press conference makes this meeting particularly significant. Investors expect the BoE to hike in August because the Quarterly report is often used as the vehicle to explain a major policy change and this month investors will be eager to find out what the odds are of a second move.

How To Trade BoE:

25bp Hike + Hawkish Carney: If the BoE raises interest rates by 25bp, upgrades its inflation forecasts and focuses more on price pressures than Brexit, GBP/USD, which has been in a tight 1.3082-1.3200 range, will break to the upside. In this scenario, we see the pair clearing 1.32 easily on its way to 1.3250.

25bp Hike + Neutral Bias: If the BoE opts for a dovish hike, which entails downplaying the need for future tightening, GBP/USD may rally initially but give up its gains quickly. In this scenario, we see sterling dropping below 1.3080 but finding support near 1.30.

No Hike: Keeping rates unchanged regardless of its forward guidance would be the biggest surprise. This would take GBP/USD to 1.30 quickly and open the door to a move down to 1.28.

Here’s a look at how the UK economy changed since the June meeting. 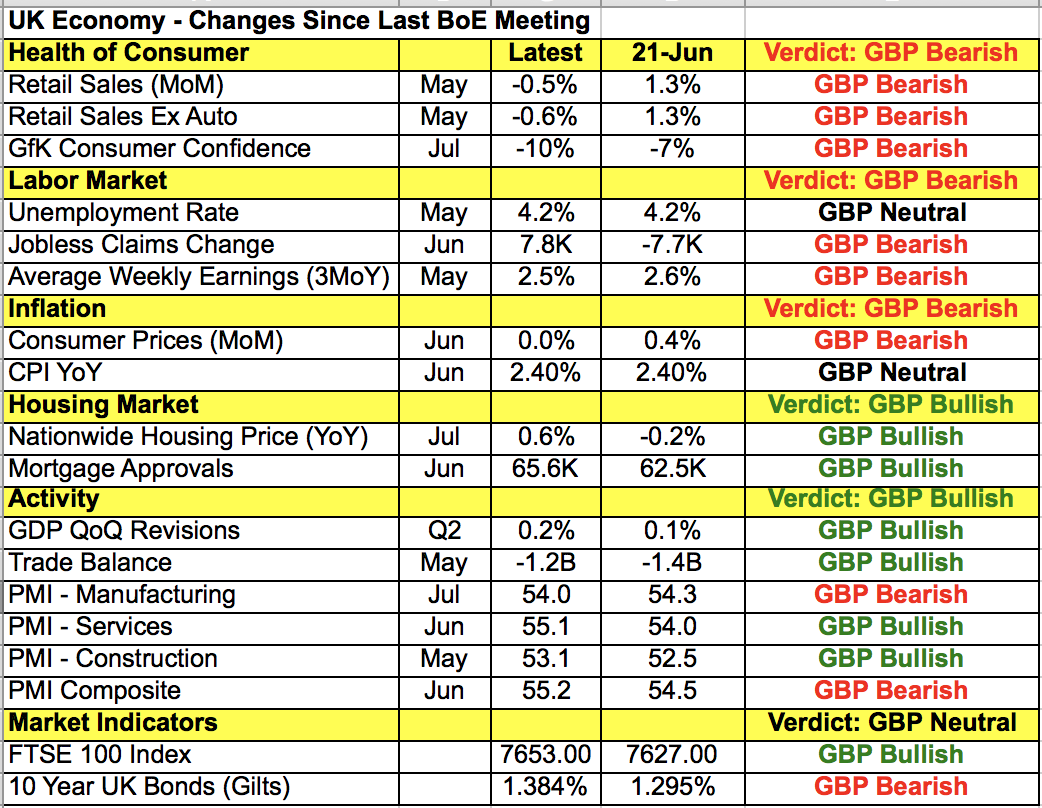