Canadian real GDP advanced by 2.9% (q/q annualized) in 2018 Q2 after increasing at a softer pace the previous three quarters (see chart below).

First, the U.S. economy experienced its strongest period of growth since 2014 (the U.S. real GDP estimate was revised up from 4.0% to 4.2% q/q annualized yesterday), allowing Canadian exports to soar during the quarter (+12.3% q/q ann). Imports advanced less rapidly (+6.5% q/q ann.), leading to a 1.5pp positive contribution of net trade to real GDP growth.

Second, consumer spending growth accelerated to 2.6% (q/q ann.), adding 1.5pp to real GDP growth. The areas of consumer spending that over performed during 2018Q2 were clothing, home furnishings and durable goods for recreation and culture. In nominal terms, household expenditures advanced at a faster pace than nominal disposable income for a third consecutive quarter. Thus, the household savings rate declined from 4.5% in late 2017 to 3.4% in 2018Q2, still a reasonable financial cushion to insulate Canadians from an unexpected negative economic downturn.

The contribution of other expenditure components to real GDP growth was smaller. First, business investment in M&E (+1.4% q/q ann.) and non-residential structures (+2.2% q/q ann.) barely moved in 2018Q2 after rising at a double-digit pace in 2018 Q1. Second, a slower accumulation of business inventories shaved 0.4pp to real GDP growth in 2018 Q2. Third, government spending registered its softest increase in a year (+1.6% q/q ann.). Fourth, residential investment virtually stalled (+1.1% q/q ann.). More precisely, the three sub-components of residential investment went in different directions: the level of new construction activity stayed dynamic, edging down from the previous quarter (-1.3% q/q ann.); renovation activities registered its best gain in the current business cycle (+12.2% q/q ann.); ownership transfer costs plunged (-12.8% q/q ann.) due to the severe decline in MLS resale transactions. Ownership transfer costs dropped by a cumulative 19% since the implementation of the B20 mortgage-qualification in January 2018. The good news is that resale activity is now coming out of this 2018 Q2 trough. The rebound in MLS resale transactions observed during summer, particularly in the GTA market, indicates a recovery in ownership transfer costs for the third quarter.

The 2.9% real GDP growth headline is in line with the Bank of Canada’s July Monetary Policy Report forecast of 2.8% and a notch below consensus (+3.1%). In our view, a skyrocketing real GDP growth number (3.5%+) would have been necessary to convince BoC officials to increase the overnight rate target by 25 basis points on September 5th. Furthermore, the second quarter ended on our sour note with real GDP stalling in June (0.0% m/m), a slight disappointment for markets (consensus at +0.1% m/m). This tepid ending in 2018Q2 implies a quick return of economic growth close to potential during the third quarter. Our call is that the BoC will keep the overnight rate target unchanged at 1.50% next week.

Finally, the economic expansion observed in Canada and the U.S. during 2018 Q2 was very good despite the escalation of global trade tensions. This week, we may assist to the de-escalation of trade frictions in North America. U.S.-Canada trade talks continue in Washington after the announcement of the U.S.-Mexico deal in principle on Monday. Mexico made major concessions with the U.S. relative to the content and wage requirements in the auto sector. Both the U.S. and Canada will likely need to show some flexibility on key trade issues to reach a new trilateral deal. For instance, Ottawa opened a small portion of the country’s domestic dairy market for the Trans Pacific Partnership ratification; it remains to be seen if a similar concession will be made for NAFTA. This being said, the Canadian federal government is unlikely to agree to a new trade pact including the elimination of the dispute resolution mechanism, a clause included in the U.S.-Mexico deal.

All in all, here are two possible scenarios that could unfold very soon:

Scenario #1: A deal in principle is struck between the U.S. and Canada; this scenario should not increase the odds of a BoC policy rate hike on Sept. 5th in our view. Signs of stronger-than-expected economic activity triggered by end of NAFTA uncertainty would be required before the BoC thinks about acting more aggressively than the gradual tightening cycle currently promoted.

Scenario #2: Canada and the U.S. are unable to find common ground; under this scenario, the era of trade uncertainty continues for Canadian businesses for at least the remaining of 2018 while the U.S. White House tries to push its bilateral trade pact with Mexico to U.S. Congress. 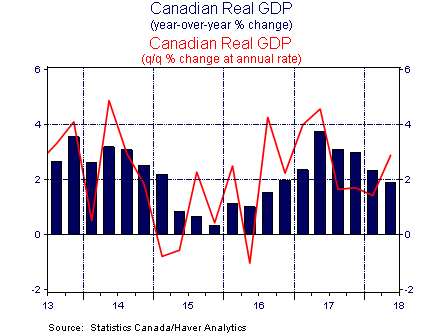