An increasingly tight market looks to be the wind at the bull’s back as Iranian sanctions being fully implemented would likely take both benchmarks, and especially Brent, higher. WTI is up on the week by ~1.4% on the dual headlines of Hurricane Florence, and the first Cushing, OK crude stockpile draw in five weeks.

Outside of recent news, the deeper drop in Iran exports and rising depletion from the other “Fragile Five” of OPEC that includes; Iran, Iraq, Libya, Nigeria, and Venezuela seems to highlight upside risks. The front-month Brent contract broke above $80/bbl for the first time since May with WTI crude trading at the highest level in two months as strong refinery runs led to a massive 5.3mn barrel draw per the EIA Crude Oil Weekly Inventory Report.

The bullish undertones led WTI volatility to the highest levels since mid-July per Bloomberg as option activity spiked on Brent $85 calls (an options bet on the price hitting or exceeding the strike.) While President Trump has created more confusion than clarity on his tariff’s against China, it does appear that Iran will see sanctions imposed rather quickly, which the IEA noted may lead to further pressure in the market (as in tightness or price support) in coming months.

Trading is a game of probabilities, and typically, when price action and fundamental themes align, it’s best not to fight the allegiance. Currently, the market appears set to carry crude higher than lower due to the ever-present geopolitical volatility and fast dropping Iranian exports.

WTI Pulls Back From $71/bbl, Traders Watching For Higher Low Base

Once again, WTI and Brent crude has become the market everyone is discussing! Unlock our forecast here

The chart above shows bullish resilience. A price channel, known as a Fibonacci Channel was drawn from the 2016/2017 lows and extended from the June 2016 high.

For traders who appreciate simplicity, may I start with the 200-DMA, which currently sits at $66.64/bbl for WTI. The price briefly traded below the 200-DMA in mid-August for the first time since September 2017 only to aggressively rallying 11.2% toward $71/bbl, the highest level in 2-months.

A sharp bullish reversal aligns with the market’s fundamentals that the path of least resistance appears to be sideways at worth, at least above $63.90/bbl or higher, at best, if you’re a crude bull. The chart above also shows a downtrend line that capped this week’s advance near $71.20. A break and close above this line would likely lead to short covering that could push price higher as well as a re-emergence of institutional bulls that has been pulling back for most of the year as explained by Paul Robinson’s CoT wrap-up. 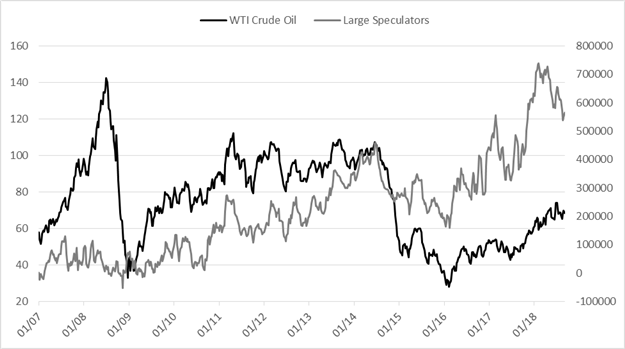 I continue to favor a more prolonged advance in crude as it remains strong, and should the US Dollar drop; we could see a boost as well as a pop in EM demand in a tightening crude market if their debt concerns lessen on a weaker US Dollar.

Next Week’s Data Points That May Affect Energy Markets:

The fundamental focal points for the energy market next week:

Tyler Yell is a Chartered Market Technician. Tyler provides Technical analysis that is powered by fundamental factors on key markets as well as trading educational resources. Read more of Tyler’s Technical reports via his bio page.

Communicate with Tyler and have your shout below by posting in the comments area. Feel free to include your market views as well.