HomenewsMarket OverviewBrexit Countdown: 1 Year To Go With Little To Show; What’s Next?

Brexit Countdown: 1 Year To Go With Little To Show; What’s Next?

The one year countdown on the UK’s departure from the European Union (EU) has officially begun; popularly known as ‘Brexit’ (shorthand for Britain Exit), the UK is scheduled to officially leave the EU at 11:00PM London time (6:00PM EST) on March 29, 2019. Mostly, negotiations have been going nowhere; even what’s been termed a recent ‘breakthrough’ is questionable. Despite lots of political noise and a bit of FX market exhilaration on tepidly good news, the major points of uncertainty for the two parties and thus markets are little changed.

As the full year, final countdown begins, nearly two years have passed since the June 23, 2016 referendum result surprised markets. Citizens of the UK voted to cut ties and leave the 28-member European economic bloc. 51.9% of the British population voted to leave; the primary reasons centered around the lack of control on immigration due to EU-based rules and the fact the UK contributed billions to the EU budget but received quite a bit less in return.

The 48.1% of voters who wanted to remain within the EU favored the free movement of goods, services, capital and individuals that being a part of the EU provides, along with the beliefs that a united European front would be more powerful on a geopolitical level than any of the individual members by themselves.

After Theresa May became UK Prime Minister on July 13, 2016, she received authorization from the British parliament and officially triggered Article 50, which legally put the withdrawal process in motion on March 27, 2017. Formal negotiations between the EU and UK began on June 26, 2017.

Nine months of discussions later, and with precious little to show for it, last week, on March 19, British Brexit Secretary David Davis and the chief EU Brexit negotiator Michel Barnier announced a so-called “agreement.” What that actually means is the two sides have come to a concession to implement a transition period that will begin on the exit date and last until December 31, 2020.

Rationally, that doesn’t sound like much. But after nearly two years the ability of the two sides to overcome tensions and provide both sides with a bit more breathing room by agreeing to a 21-month “extension” could be considered an advance. That certainly sparked FX market optimism. Take a look at how reacted on the day of the announcement: 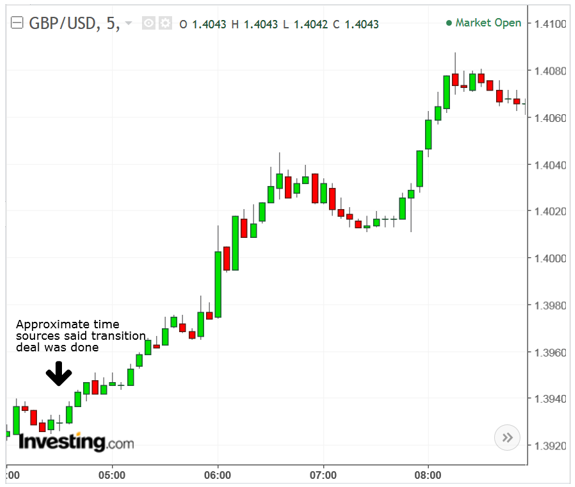 The immediate move in sterling suggests not that the UK is out of the woods regarding its future relationship with the EU. Rather it signals that markets had expected more of the same…Brexit negotiators continuing down the too familiar path of no progress.

The fact that some form of agreement saw traders unwinding more pessimistic bets shows just how mired the negotiations had become.

Still, as EU regulators have stressed, “nothing is agreed until everything is agreed.” Even this transition period agreement isn’t yet legally binding. And a final deal is hardly at hand.

One point that has been clarified via preliminary agreement is the UK’s financial settlement for the divorce, approximately £37 billion ($52.29 billion). Another sticking point that has been smoothed are the rights of EU citizens residing in the UK (and vice versa). Those moving to either side of the channel during the transition will be allowed the same rights as those who lived in the corresponding country before the Brexit.

For financial markets, the acceptance of the transition period was the critical development since it allows time for public institutions and private companies to adjust. For instance, customs agents at the docks will need to prepare installations for the new regulations while businesses that had not already triggered contingency plans may need to switch suppliers.

Despite all this, Brexit negotiators have a lot to overcome as they seek to hammer out solutions to more complicated questions over the next 365 days.

Considerations include what to do about the border between the UK’s Northern Ireland and the Republic of Ireland, an EU member. This has been particularly contentious.

Neither side wants to return to a “hard border” which would include customs checkpoints theoretically required once the UK is no longer a member of the EU. The March 19 preliminary deal did implement an emergency “backstop” option to avoid a hard border that would require Northern Ireland to effectively remain in parts of the EU’s single market and the customs union unless, and until, an alternative solution is found. Despite preliminary agreements on several clauses, both Dublin and Brussels are insisting on the need for significant progress on the issue prior to the next summit of EU leaders to be held in June.

The possibility of the two sides being unable to forge a trade deal, thereby reverting to World Trade Organization (WTO) rules, remains a possibility. RAND Corporation, an American global policy think tank, produced an analysis that identified this as the worst-case scenario outcome. According to their calculations it would reduce the UK’s future gross domestic product by about 5% or $140 billion compared with its EU membership future GDP.

One of the seven possible trade outcomes (four of which can be seen in the above chart) could actually result in positive growth for the British economy, if a multilateral UK-US-EU deal—essentially in the form of a Transatlantic Trade and Investment Partnership (TTIP)—could be forged. This would provide the UK with preferential access to both the US and the EU marketplaces .

But analysts also pointed out that none of the “soft Brexit” scenarios would be as beneficial to the UK as the trilateral UK-EU-US agreement. “All three scenarios are likely to lead to modest financial losses to the UK economy compared to the current arrangement of EU membership,” they specified.

Businesses Still In The Dark

Businesses on both sides of the channel continue to try to plan for the future despite the continuing uncertainty. More than one in 10 EU firms (11%) have moved some of their workforce out of the UK and 9% of UK firms have lost contracts or had them cancelled as a direct result of Brexit, according to the Chartered Institute of Procurement & Supply (CIPS). Additional damage could come in the form of layoffs and price increases to offset upcoming Brexit costs.

Pinsent Masons, an international law firm which assists businesses with transformational changes, found that 51% of companies had already activated contingency plans. An additional 40% claim they will do so by the end of 2018 if no additional clarity on Brexit specifics is provided.

All of this uncertainty makes it difficult to judge what the impact on company bottom lines, and thus stock prices, will be.

There is deep skepticism over Brexit secretary David Davis’ opinion that the 21-month transition period “should give us confidence that a good deal for the UK and EU is closer than ever before”. The paltry advances made so far still leave the most contentious issues on the table. While the transition period agreement eased some of the uncertainty, it in no way guarantees any of the possible outcomes.

The initial bullish move in cable on the transition period news indicates that markets felt a sense of relief, interpreting it as a signal that both parties were at least aiming to back away from the edge of the no-deal cliff. Still, sterling remains about 8 cents below the $1.4879 level at which it closed prior to the announcement of the referendum results back in 2016.

However, while fears of the worst case scenario appear to have been calmed, the outcome—along with its impact on the pound or equity markets both locally and globally—is far from assured.