GBP: Yet another volatile session so far ahead of tonight’s Brexit vote (1900GMT). GBPUSD had moved towards 1.33 throughout the Asian session after PM May had gained legal assurances over the contentious backstop. However, gains had been pared during the European morning following the legal opinion from AG Geoffrey Cox, which noted that legal risks from the new deal were unchanged. In turn, this has reduced the likelihood that PM May will get her deal across with both the DUP and ERG stating that they will not support the deal. As such, this saw GBPUSD fall to lows of 1.3000. As reminder, with GBPUSD 1-day implied volatility at the highest since July 2016, price action is likely to remain choppy. Headline risk will continue to dictate in the run up to tonight’s vote.

SEK / NOK: Inflation troubles persist for the Riksbank with the latest Swedish CPI report, falling short of expectations and the central banks forecast. Consequently, SEK is on the backfoot against the EUR and NOK with the latter also supported by the uptick seen in oil prices. 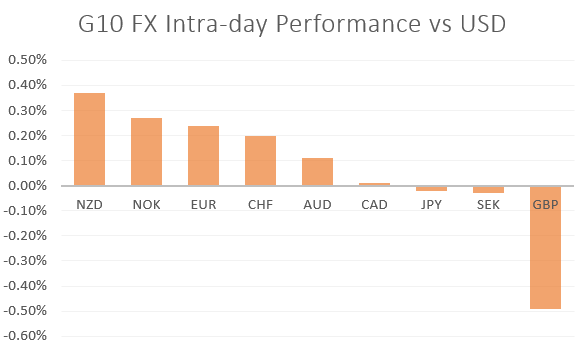