Sterling (GBP) is likely to become more volatile as the clock ticks down to the latest Brexit deadline – October 31st – with both sides becoming increasingly weary and frustrated at the continued ‘cankicking’ exercise. Against this backdrop, Sterling is likely to become more volatile, a boon for traders who have had to sit back and watch most Sterling pairs trade in relatively restricted ranges over the past three months.

Losses persisted for GBPUSD after failing to consolidate above the 1.3000 handle. Although, at the back end of Q2, the pair had managed to find stability above 1.2500, which also coincided with the rising trendline stemming from the October 2016 flash crash. While the pair may have found a floor at 1.2500 in the near-term, momentum indicators on the longer-term timeframes (weekly & monthly) remain tilted towards a bearish bias, thus a retest of 1.2500 cannot be ruled out, particularly if a closing break below the key trendline was made, which would expose the 1.2426 January low. 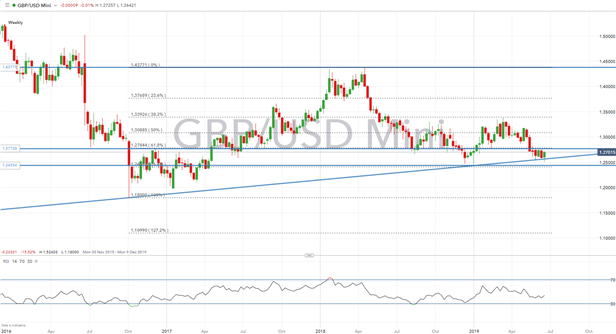