Oil prices may exhibit a more bullish behavior over the coming days as the Organization of the Petroleum Exporting Countries (OPEC) and its allies emphasize their commitment in rebalancing the energy market, and crude may continue to retrace the decline from the July-high ($75.24) as it appears to be on track to threaten the range bound price action carried over from the previous month.

Even though Rosneft PJSC, Russia’s largest oil producer, stands ready to boost crude output, fresh remarks from Energy Minister Alexander Novak suggest the region will uphold the agreement from OPEC’s 174th meeting as ‘future production levels will depend on meeting this goal.’

Despite the renewed sanctions on Iran, it seems as though OPEC and its allies will continue to carry out the production-cutting measures as crude output in the United States climbs to record-highs. The ongoing supply-side adjustment keeps the broader outlook tilted to the topside as the group appears to be on track to retain the extraordinary measures throughout 2018, with the economic crisis in Venezuela also likely to attribute to higher oil prices as it curbs the outlook for supply.

With that said, the broader outlook for oil remains constructive as both price and the Relative Strength Index (RSI) retain the upward trends from earlier this year, with the momentum indicator on the cusp of flashing a bullish signal as it comes up against trendline resistance. 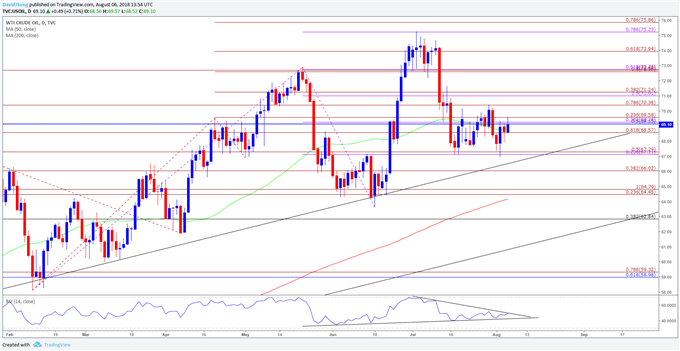 For more in-depth analysis, check out the Q3 Forecast for Oil