HomenewsAlertsCAD Soars on Data, Trump Slams China and the EU for Currency Manipulation

CAD Soars on Data, Trump Slams China and the EU for Currency Manipulation

The last trading session of the week sees US equity futures on the backfoot. Trade war spat between the US and China kicked into high after reports that Trump is readying tariffs on all imports of Chinese goods, valued at over $500bln. Alongside this, recent tweets from the President added to the selling in equities, in which he slammed the EU and China for currency manipulation by keeping rates low, while he was also critical of the Federal Reserve’s hiking cycle.

USD: In the wake of the most recent tweets by President Trump the USD has sold off aggressively. Subsequently, increasing the signs that the USD may indeed be topping out after with key resistance holding firm yet again. Additionally, huge net USD long positions will also be unnerved by the latest comments from the President.

GBP: A brief break above 1.31 amid the sell-off in the USD index, while upbeat comments from EU’s Brexit Negotiator Barnier over the UK white paper has also provided a boost for the Pound. Barnier also stated that a deal could be possible by October or November, which in turn has alleviated concerns of over a no-deal Brexit.

CAD:The Loonie is soaring this morning after the latest inflation and retail sales data printed ahead of expectations. This prompted USDCAD to crash through the 1.3200 handle with eyes now on support at 1.3100-10. To confirm a bearish move lower, a close below 1.3060 is needed. 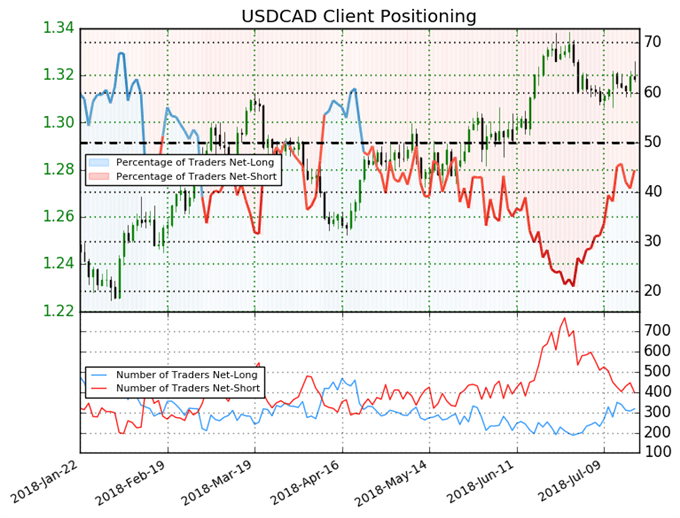 We typically take a contrarian view to crowd sentiment, and the fact traders are net-short suggests USDCAD prices may continue to rise. Traders are further net-short than yesterday and last week, and the combination of current sentiment and recent changes gives us a stronger USDCAD-bullish contrarian trading bias.